Ballpark food can be one of the best things about going to a baseball game. If it’s plain ol’ hot dogs and pop, it’s not necessarily noteworthy. But if it’s exceptional food, like the fare served at Rochester’s Frontier Field, it can truly improve your whole experience.

As you’ve read in previous entries, I’ve had a lot of positive food experiences at different ballparks. There are a few, however, that I want to highlight just for fun.
Rochester was my first ballpark stop in the summer of 2010, and as you can read on my website, TheBallparkGuide.com, the food I had here was perhaps the best I’ve ever had at a ballgame. In Rochester, I bought a giant Mountain Dew in a Red Wings collectible cup, which was pretty cool. On one side, it had former Rochester star Cal Ripken, Jr., and on the other side, most recent Red Wing player Joe Mauer. As you can see below, the cup was pretty large: 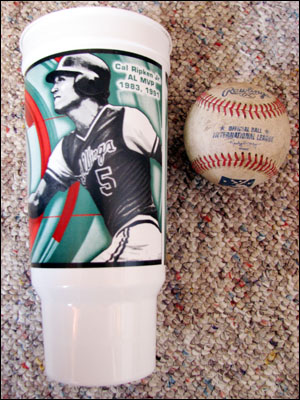 In Buffalo, the Buffalo chicken wings were underwhelming. But what was neat was the ability to grab packets of Frank’s RedHot sauce at concession stands. This is the first time I’ve seen packets of this spicy cayenne pepper sauce, and it was neat to grab a bunch and add to my food. I’ve even used them at home since: 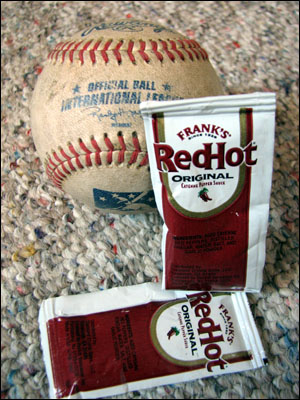 Lastly, ask a Cleveland resident about what mustard to eat, and you’ll likely have a lengthy discussion on your hands. Of course, there’s the bright yellow French’s mustard, but in C-Town, you’ve also got Bertman’s Original Ball Park Mustard and another product called Stadium Mustard. Bertman’s Original Ball Park Mustard is available in pumps at concession stands and also for sale in the Progressive Field shop. I bought the bottle below for less than $5: