After I left the game between the Great Lakes Loons and South Bend Silver Hawks at Dow Diamond on May 22, I drove all the way to Grand Rapids, Michigan in anticipation of the West Michigan Whitecaps game on May 23.

Like the Lugnuts and Loons, which I’d seen previously on this trip, the Whitecaps play in the Midwest League. They’re the affiliate of the Detroit Tigers.

The Whitecaps play at Fifth Third Ballpark (not to be confused with Toledo’s Fifth Third Field), which is in the Grand Rapids suburb of Comstock Park. The ballpark itself is right off the highway, and simple to get to. After I parked, I took a photo of the sign …

… and bought my ticket:

Fifth Third Ballpark is built up on top of a hill, and is surrounded by a lot of green space: 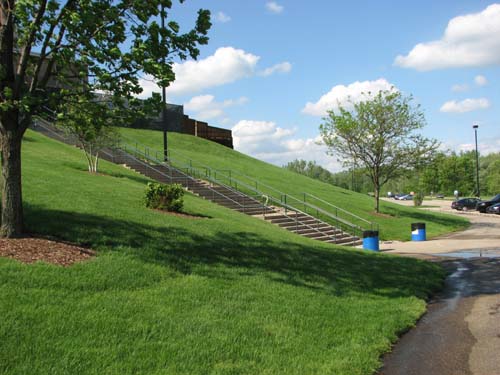 Touring the outside of the facility, I came across the players’ parking lot, which is to the rear of the stadium. I always like looking at players’ lots, whether it’s an MLB team’s lot or one at an MiLB park. MLB lots are full of expensive cars. MiLB? Not so much. I always like to take a brief look at the vehicles and see how many nice ones there are, then compare that number to the team’s first-round draft picks. See the brand-new Range Rover?

Now, I have no idea who it actually belongs to, but I looked up that first-rounder Nick Castellanos (who coincidently attended the same high school as Tigers catcher Alex Avila) was a first-round draft pick of the Tigers in 2010. His signing bonus? $3.45 million. So, I’m guessing he’s not driving a minivan. (This is reason 1,357 that I love baseball — it’s awesome to tour the stadiums, take in the sights and form your own conclusions about what you see.)

After walking up and down the hills surrounding the ballpark, and taking the photos to make up this panorama …

… I went around to look at the front. Here’s a view looking up the steps toward Fifth Third Ballpark …

… and a view looking down the steps:

If all the stairs make you worried about accessibility, you can get up to the gate via a long ramp:

There’s a ticket office located at the top of the stairs/ramp: 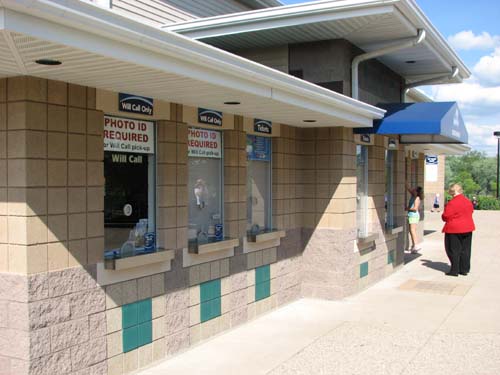 And through the chain-link fence, I could peruse a concession menu while I waited:

Once the gates opened, I headed in quickly in search of a batting practice ball. Like other MiLB parks, the gates to Fifth Third Ballpark open after BP is done, but you can occasionally find a ball in the stands.

I headed straight to the first-base side dugout and, in the second row, found this:

The picture doesn’t show it, but the other side of the ball had a huge gash, as though it had hit something sharp. Nevertheless, it was another Official Midwest League Ball! A tour of the rest of the seating turned up nothing, so I started taking in the ballpark’s different features. From top to bottom: An extensive picnic deck in right field; a picturesque waterfall area beyond third base; the pressbox area, with the Whitecaps’ five league banners from 1996, 1998, 2004, 2006 and 2007 (pretty consistent, huh?); and the two-tier Pepsi Stadium Club, which is located in right-center: 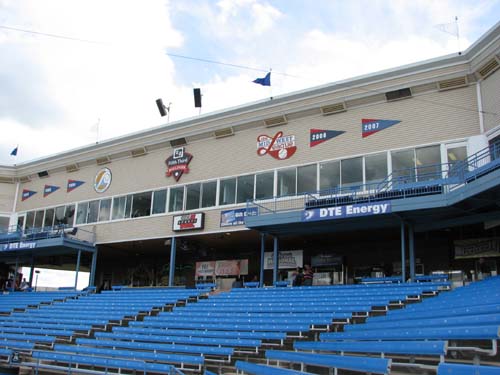 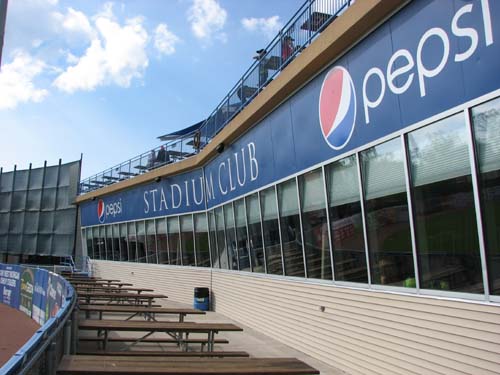 As you can see in the two photos below, Fifth Third Ballpark has both bleachers and box seats in the lower deck and suites up above:

Soon, the Whitecaps, who were playing the Fort Wayne TinCaps (Caps vs. Caps) came out to stretch:

After watching them for a bit, I took a tour around the concourse: 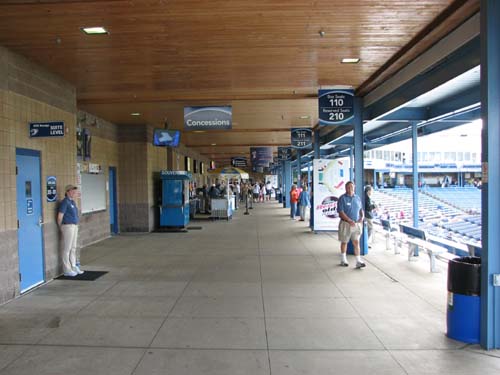 Fifth Third Ballpark has all sorts of concessions, including a unique tiki hut: 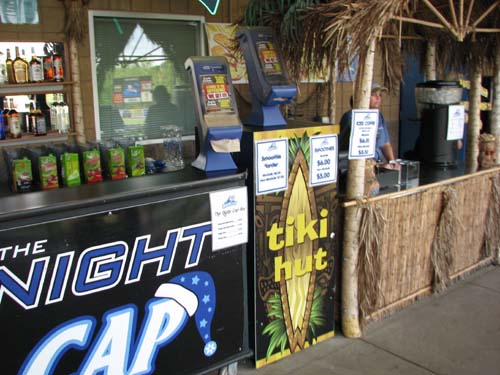 But everything pales in comparison to the Fifth Third Burger, which has been featured on Travel Channel’s Man vs. Food: 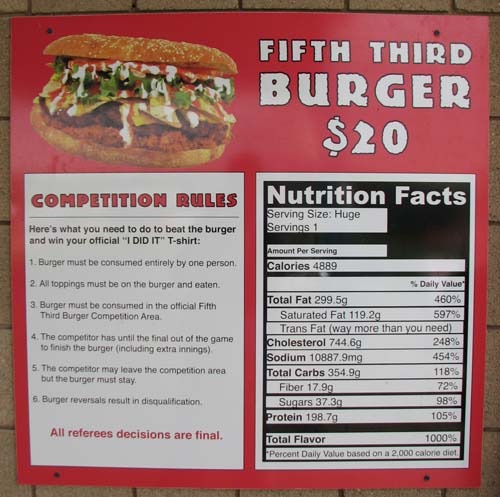 Note the 4,889 calories, 299.5 grams of fat and other ridiculous numbers. This burger costs $20, and is about the size of a hub cap. If you conquer it (without “reversing” it, as indicated in rule #6) you win a T-shirt. There’s an official competition area and a referee to watch you:

I didn’t tackle this monstrosity, mainly because I was at this game alone and engaging in eating challenges by one’s self = loserish. Had I been with a few buddies? Uh-oh!

Behind home plate, a daily-updated board shows the Midwest League’s standings:

I thought this was much nicer than simply writing it with a Sharpie on a white board, as many ballparks do. As you can see, the Whitecaps are dead last in the East and second last in the league, but you wouldn’t know it by their fan base. The park was loaded with passionate fans who were really into the game. And as you’ll see below, the Caps are actually fourth in Midwest League attendance: 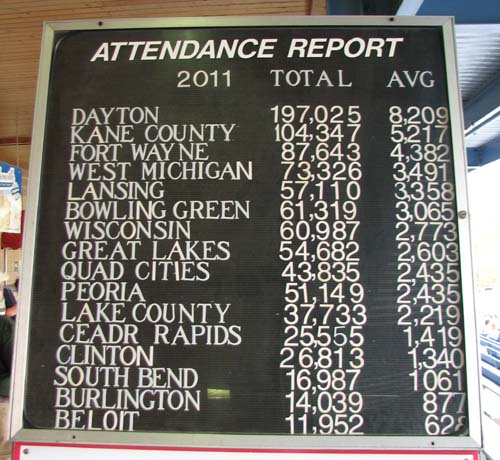 A note to fans of the Beloit Snappers: Step your game up. Really. 628 fans a game? Brutal. Canada has lost a ton of Minor League franchises over the years because of a lack of fan interest. And it’s awful. Once it’s gone, it’s not coming back. Get out and support your team, which has an impressive alumni list including Prince Fielder.

Note: If you’re visiting Fifth Third Ballpark, see if you have an old glove you can donate. You can leave gloves in a bin inside the front gate, and the Caps will see that they’re distributed to kids who need them:

By now, the game was set to begin, so I grabbed a picnic area spot up high on the first base side to watch. Here was my view:

And here’s the foul ball I caught on a one hop in the top of the first inning: 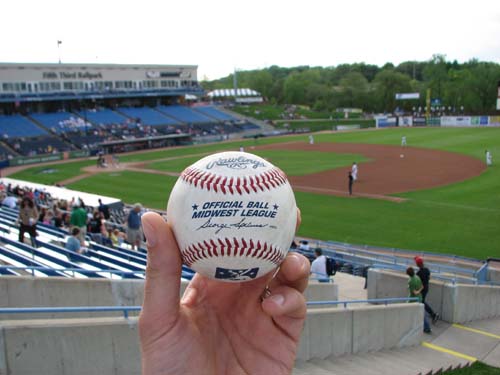 A day earlier, when I was in Midland to watch the Great Lakes Loons, I caught a foul in the first inning, too.

After a couple innings, I grabbed an order of “super nachos” and settled in behind first base:

Once the nachos were down, I walked around the concourse again, noting the nice wooden ceilings and flat-screen TVs throughout: 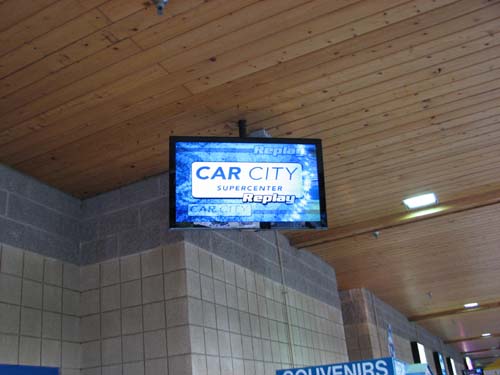 I checked out the team store behind third base, and bought a Whitecaps T-shirt, then watched the next several innings from a picnic area up high on the first base side, and eventually, the sun began to set, so I snapped this panorama:

The game itself was interesting — and probably infuriating for Whitecaps fans. West Michigan starter Antonio Cruz had his best outing of the season, going 6.1 innings and allowing just one run on four hits, while striking out eight. He left the game with the lead, and after a hold by Ramon Lebron (don’t freak, Cleveland — it’s a different Lebron), Dan Gentzler allowed three earned runs in the eighth and ninth. Final score: Fort Wayne 4, West Michigan 2.

Detroit tomorrow for the first of two Tigers games!