Back on May 21, I visited Cooley Law School Stadium to watch the Midwest League’s Lansing Lugnuts in action.

As I wrote at the time, I obtained a couple autographs at the ballpark’s autograph area in the right field corner. 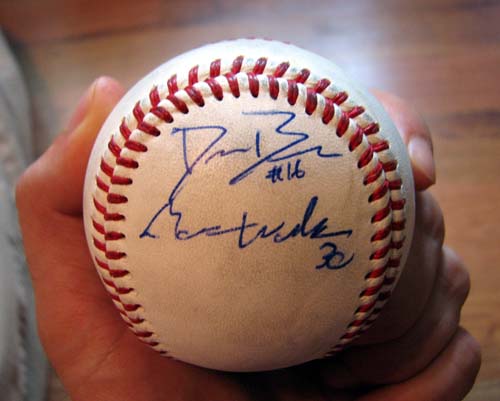 And who signed it, you ask?

The first signature is 1989-born pitcher Danny Barnes, who was drafted by the Blue Jays in the 35th round of the 2010 First-Year Player Draft. Barnes has to be one of the smartest guys in the Midwest League, too — he went to Princeton University. He’s pitching this season in a relief role, but has a very nice 4-0 record in 18 appearances. His ERA is just 2.73 and in 29.2 innings pitched, he has 50 strikeouts and just nine walks. With those numbers, I think people will soon be asking for his autograph at A+ Dunedin or AA New Hampshire.

The second signature is relief pitcher Marcus Walden, a 1988-born righty who’s one of three guys named Marcus on the Lugnuts. In 12 appearances this season, Walden is 1-2 with an ERA of 4.44. He was drafted by the Jays in the ninth round of the 2007 Amateur Entry Draft.