As you may have read about here, I watched the Portland Sea Dogs play at Hadlock Field on July 31. Hadlock Field certainly has its charms, but one of its drawbacks is the ability for fans to get autographs.

If you want the visiting club’s players to sign, it’s easy to gather around the bullpen and between the bullpen and dugout. For the home side, it’s a different story, because the bullpen is beyond the right field fence and there’s a restricted access group area down the first base line.

All that said, I did manage to get one autograph during my visit, and it came easily. The Sea Dogs had one player sign in the concourse prior to game, and I got him on a ball: 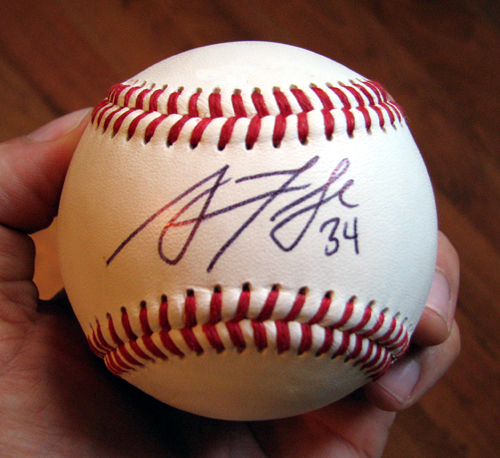 It turns out that Fife was traded the same day I got him to sign (not sure if the deal was made before or after I got the autograph) but he was part of the three-team deal that sent Erik Bedard to Boston. Fife ended up in the Los Angeles Dodgers organization, and is currently pitching for the Double-A Chattanooga Lookouts. He hasn’t suffered any post-trade blues; he’s 2-0 with a 1.64 ERA and 11 strikeouts in 11 innings.

Hard to know where Fife’s career will go, but as a former third-round draft pick, it’s clear MLB scouts think he has what it takes to get to the big leagues. It’ll be fun to watch how the rest of his season progresses and where he ends up.