As you may have read about in my post a couple days ago, I saw the New York-Penn League’s Vermont Lake Monsters in action last weekend at Centennial Field.

Like always, I was on the hunt for autographs, and the Lake Monsters didn’t disappoint. I managed four signatures on a ball, and could’ve had way more, had I not decided to cut my autograph seeking short to go play catch on the field.

In the photo below, you’ll see the autograph of Lake Monsters manager Rick Magnante:

For trivia buffs, Magnante played Minor League Baseball in 1969 and began managing in 1987. He scouted for the A’s for a decade, and even managed the South African team at the 2006 World Baseball Classic. And, according to Baseball-Reference, had a role as a third base coach in the movie “The Fan,” with Wesley Snipes and Robert De Niro.

In this next photo, you’ll see the autographs of OF Xavier Macklin, LHP Eric Potter and pitching coach John Wasdin. Wasdin was a first rounder in 1993, pitched for a decade in the big leagues and had a couple stints in Japan: 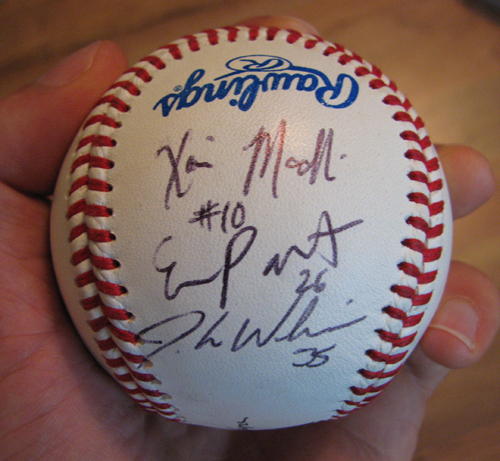