Before I shift gears to concentrate on my travels in 2012 for The Ballpark Guide, I want to take a few moments to look back at the highlights that made up my 2011 baseball road trips. I’ve put together an extensive list of memorable events from an amazing summer — a list that’s not chronological or alphabetical. It’s just a list of some neat things to share. Most of the items below are highlights, but there are a few lowlights, too. Today’s installment is the first of three “best of 2011” blog entries. The next two will come in the days ahead.

It didn’t take me long to grab my first ball of 2011. When the gates opened during my first game of the season (May 19 in Toronto), I charged in, ran down to field level and found a batting practice ball sitting in a row of seats a few rows up. Here’s the ball: 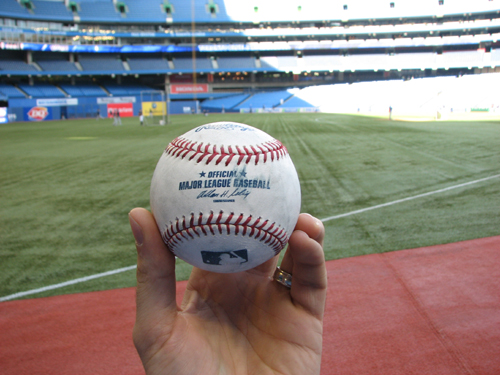 In 29 games, I managed to snag four foul balls, which is pretty good if you ask me. I got my first one on May 22 at a Great Lakes Loons game, followed that one up a day later in West Michigan, then added one on May 29 in Erie and finally, August 21 at Vermont’s Centennial Field. Here’s the foul ball from Erie: 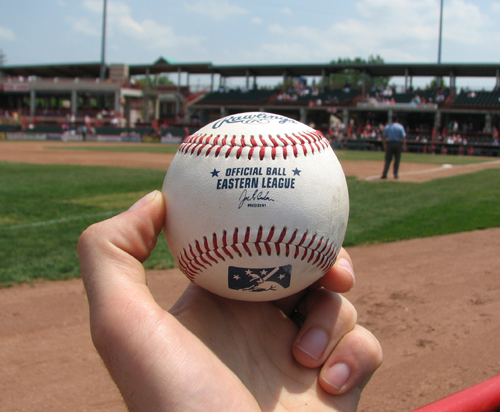 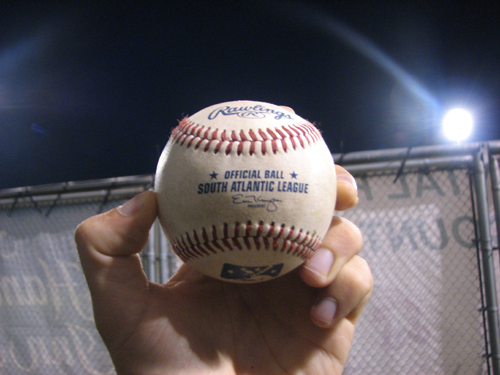 4. Most balls collected at a single park: 13

Arthur W. Perdue Stadium, home of the Delmarva Shorebirds, is ball-snagging heaven. I collected 12 balls during batting practice and added Nowak’s home run ball to give me 13, which is the most I’ve ever got at one park. Here are three of them during BP: 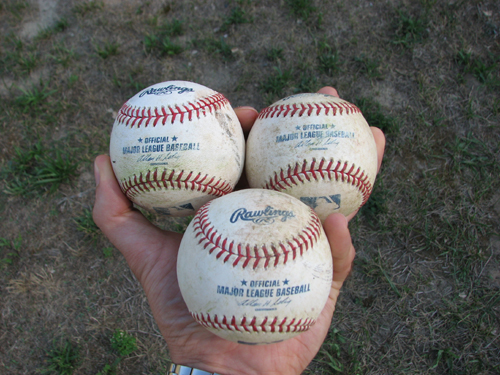 I don’t ask players or coaches for balls; I’d rather catch them. A few minutes before a Lansing Lugnuts game on May 21, I was standing at the Lugnuts bullpen and saw a warmup ball sitting partially under a tarp. Because it was starting to rain, I called to the Lansing pitching coach (who was collecting balls in the area) and pointed out the ball. His response? He grabbed it and flipped it to me. Before he did, I took this photo of the ball: 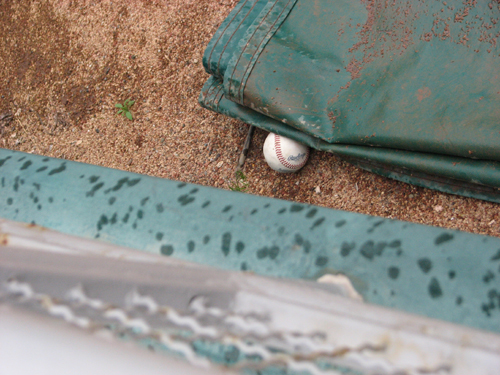 I collected autographs at most of the ballparks during my travels, but nowhere yielded success like Bowie, MD. Before the Baysox game, the entire team was set up at tables throughout the concourse. I walked from one end to the other and got 26 signatures on one ball. You can read about that ball and see all the autographs by checking out this blog post.

7. Most MLB autographs: Four in Detroit

Before a rain-shortened game on May 25 in D-Town, I got four Tigers to sign a ball for me. One guy, Adam Wilk, isn’t a household name just yet, but the others — Max Scherzer, Rick Porcello and manager Jim Leyland — are awesome. This is the panel with the three players’ autographs: 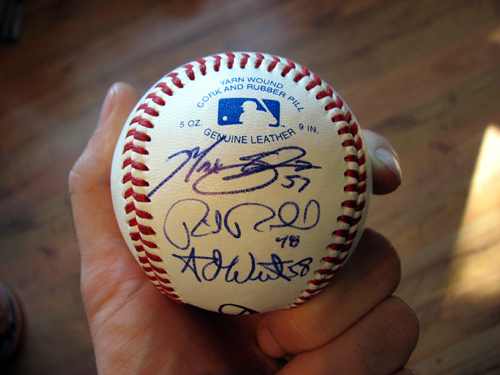 Hands down, my favorite autograph of the summer was that of former first-round draft pick Bryce Harper, who’s arguably the top prospect in baseball and the most exciting one to come along in decades. I visited Hagerstown’s Municipal Stadium on June 27 with the hopes of getting Harper to sign and after a long adventure, it finally worked out. You can read the entire adventure here. In the meantime, here’s the ball:

I’m pretty fond of these two top souvenirs I collected this summer. The first is a lineup card that hung in the Tigers dugout at Comerica Park during a Tigers-Blue Jays game. As you can see, it’s signed and filled out by Tigers manager Jim Leyland and features all sorts of neat notations: 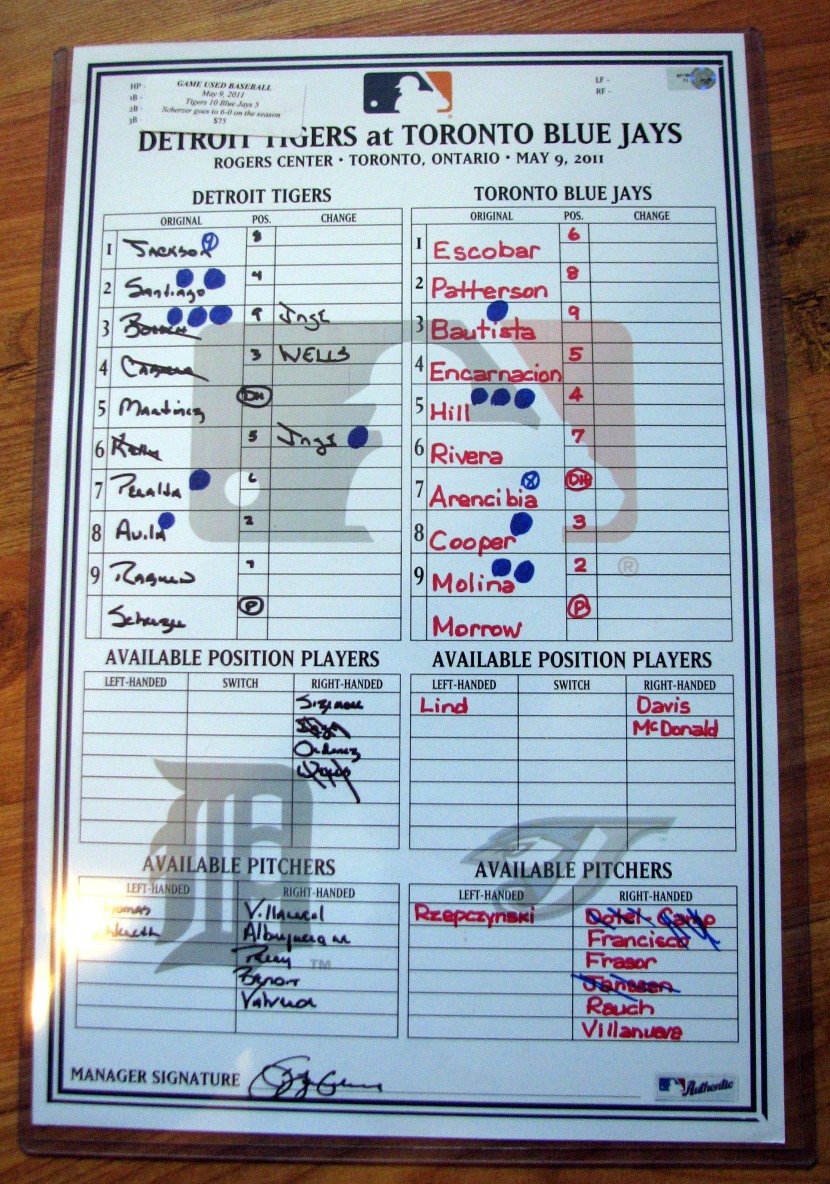 The other great collectible is a game-used bat from former Blue Jays slugger Randy Ruiz. My wife bought me this amazing bat during our visit to New Hampshire in July: 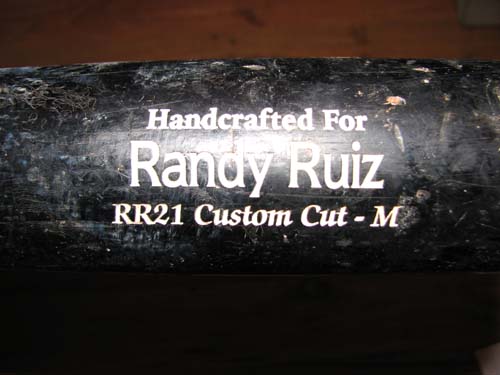 The Tigers ace had one of the best seasons by a pitcher in recent memory — and I got to see him pitch live when I was in Detroit on May 24. Verlander won 24 games in 2011, but when I saw him, he had a no-decision after giving up six runs on nine hits in six innings. Before the next day’s game, I snapped a photo of him as he walked by: 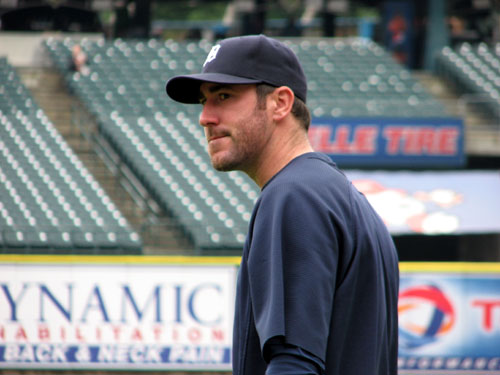 During a May 22 visit to Midland to watch the Great Lakes Loons, the game was interrupted by this crazy rain and hail storm … 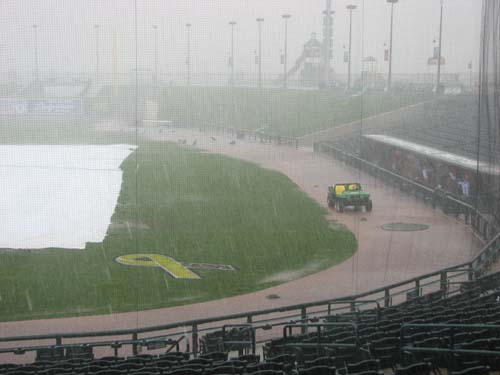 … but eventually, conditions improved and the game resumed. A few days later, on May 26, I drove through an equally nuts storm on the way to Fort Wayne: 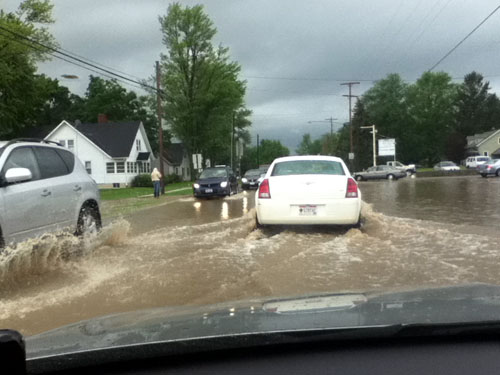 Sticking with the Mother Nature theme, the rain storm during my second Tigers game was intense. You’d hardly believe that I took this photo early in the afternoon: 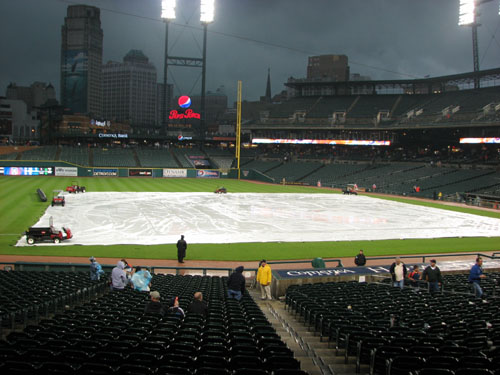 Not every baseball fans gets a one-on-one tour of a ballpark by a team’s general manager, but that’s exactly what I was fortunate enough to enjoy on May 27 in Fort Wayne. After telling a friendly usher about my website and my travels, he sought out TinCaps GM Mike Nutter, who took me for a tour around Parkview Field for more than 20 minutes. The highlight was a stop in the team’s clubhouse, which is something few fans get to see: 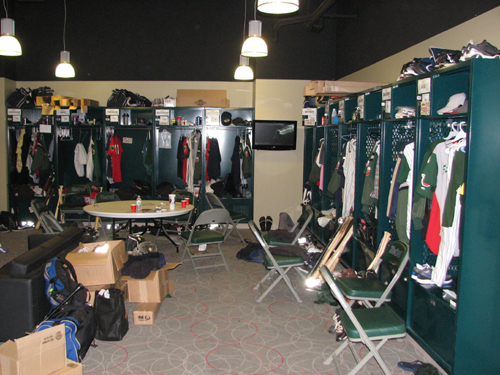 On the big league stage, I enjoyed a group tour of Camden Yards before my second Orioles game in two days on June 30. The tour offered impressive behind-the-scenes look at the ballpark and even took us to field level, where I got my picture taken with head groundskeeper Nicole Sherry: 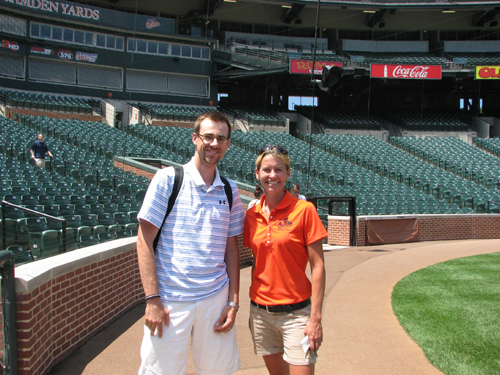 As you might’ve read about here, I recently ranked the best food I’ve eaten on my travels. The crab cake sandwich at Aberdeen’s Ripken Stadium beat all the competition: 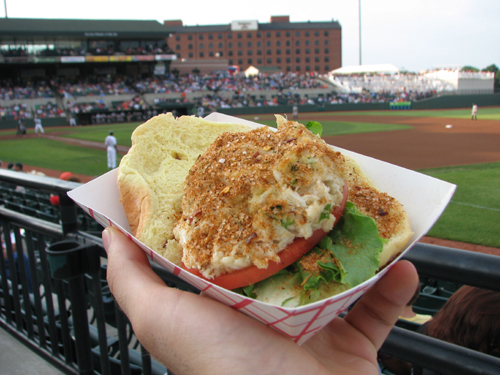 I bought a ticket in the all-you-can-eat section of Harrisburg’s Metro Bank Park on June 24. And while I didn’t overdo it, I did put away two hot dogs, two sliders, two bags of popcorn, one bag of peanuts and one ice cream sandwich.

Check back soon for parts two and three of this “best of 2011” series! And remember to follow me on Twitter for updates about my website, blog and upcoming travels.