Last year, I saw a ton of MLB and MiLB games on my travels. If you’re curious where I went, check out this link.

In continuing with my Best of 2011 series, I’ll be looking at 15 more highlights (and the odd lowlight) from Portland, Maine to Midland, Michigan and several spots in between. (If you missed them, here are links to part one and part two of this three-part series.)

One of the many perks of Dow Diamond, home of the Midwest League’s Great Lakes Loons, is that the park has Wi-Fi. As you’ll see below, while I waited for the start of the Loons game, I took in an inning or so of the Blue Jays game on my iPod touch, thanks to the MLB ’11 app: 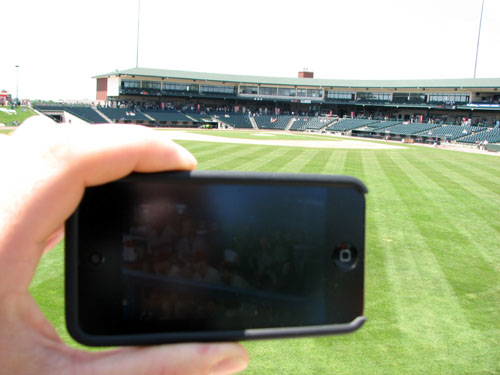 Most MLB parks have numerous memorabilia items for sale or up for auction, and it’s fun to check out the selection. When I was in Baltimore in June, I saw a Minor League Baseball jersey that might’ve been a tad overpriced. You can draw your own conclusions, but I’d rather put $2,000 to better use: 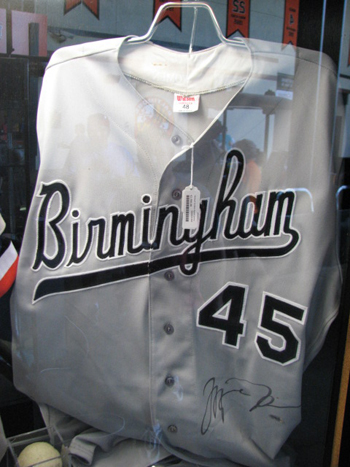 When I call this the best parking job I saw, it’s a little tongue-in-cheek. I spotted the Ferrari below in one of the lots outside Comerica Park. The guy obviously didn’t want to put his car in a regular space, and I wonder if he carries the pylons around in his trunk: 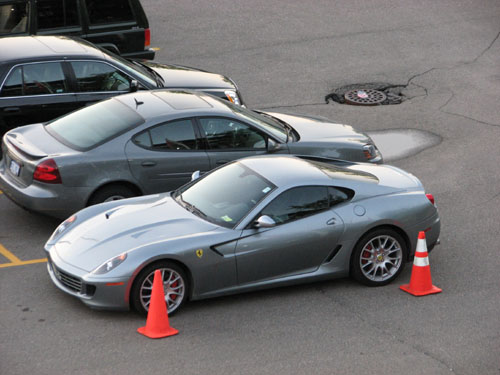 As a side note, after I took this picture, a homeless person asked me for money … while we were both inside the ballpark. (WTF?) I thought of suggesting that he should hang out around the car and wait for the owner to return. (As an extra side note, I was hit up for money THREE times inside ballparks this summer — Comerica Park, Progressive Field and Parkview Field. Triple WTF?)

I was stoked when Toronto’s J.P. Arencibia homered during my first game of the season on May 19 in Toronto. But I obviously wasn’t as excited as this guy sitting a couple rows in front of me. He used the on-field distraction to lower his pants, rearrange himself and do his pants back up: 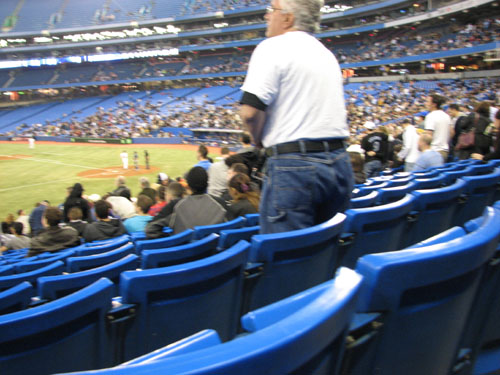 35. Worst seat I saw: Tie between Toronto and Baltimore

This seat in Toronto needs little explanation. Glad I didn’t buy a ticket for it: 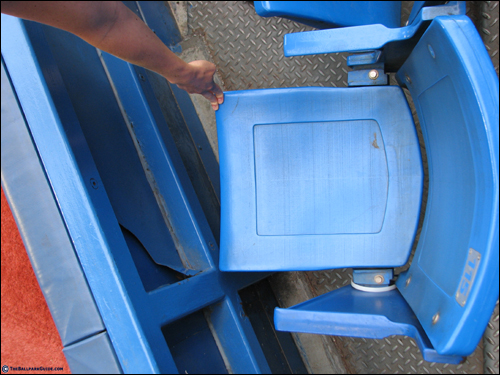 Was it as bad as the seats chosen by these chickens at the Jack Daniel’s BBQ concession in Camden Yards? You be the judge: 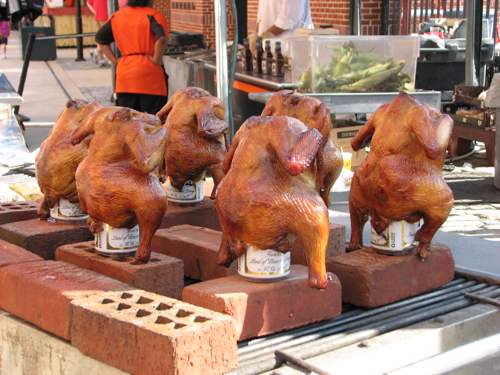 I’ve always been a fan of Jim Thome, regardless of where he’s played. A prolific hitter, he’s always just gone about his business and is one of the lone modern-day sluggers never associated with steroids. It was amazing to be at Progressive Field in September to watch Thome be inducted into the Indians Hall of Fame. Although a long rain delay dampened the festivities slightly, Thome put an exclamation on everything by blasting a home run, which would end up being his final as an Indian. Here are a couple pictures from that great evening: 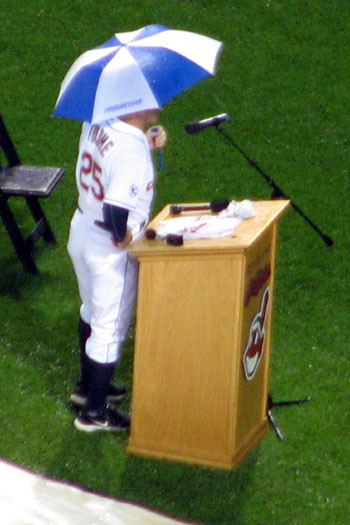 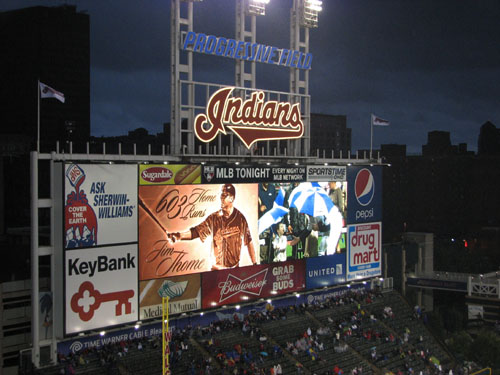 Fifth Third Ballpark, home of the West Michigan Whitecaps, has a lot of catchy features. I was a big fan of the wooden ceilings over the concourse and the nice flat-screen TVs mounted below. The combination just seemed to work: 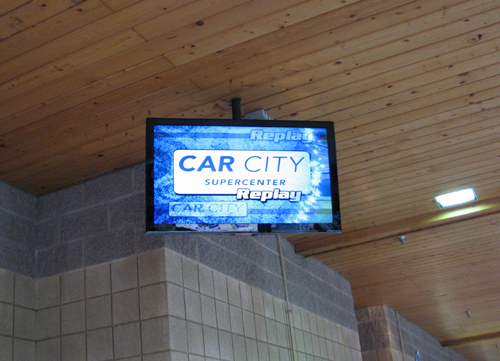 I’m not the type of person who spends much time gazing at the concourse TVs, but if I’m standing in line and can’t see the field, they’re a good way to keep an eye on the game. During my visit to Portland, however, the game on the TV was a little hard to follow: 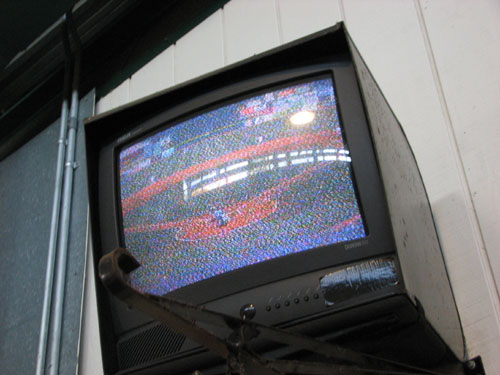 38. Best being in the zone: Hadlock Field

As you might’ve read in part two of this series, I tested my mettle at the speed pitch booth at Hadlock Field in Portland. My wife served as my official photographer for the demonstration of blazing speed and as I awaited my turn in line, she snapped the picture below. She swears it’s me meditating or otherwise getting in the zone for my throws; I maintain I was just blinking: 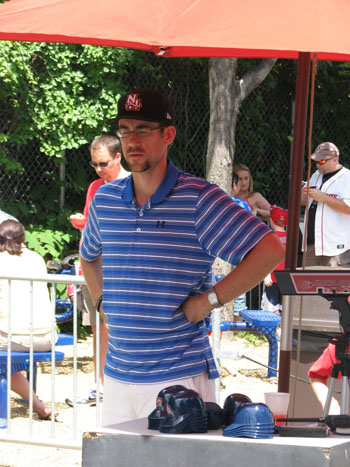 Technically, I don’t know if fans can toast marshmallows on either of the two wonderful open fire pits at Dow Diamond. (I doubt it, due to that pesky fire marshal and his rules.) Sugary treats aside, isn’t this fire pit one of the coolest things you’ve ever seen at a ballpark? 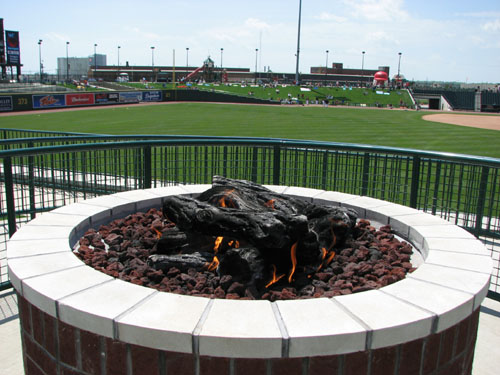 If you’re a baseball fan, there’s something neat about watching the sun as it sets over the park. Oftentimes, you can get some amazing shots as the sun dips. I try to get a sunset shot everywhere I visit, but I think the one I took at Fifth Third Ballpark, home of the West Michigan Whitecaps, takes the cake: 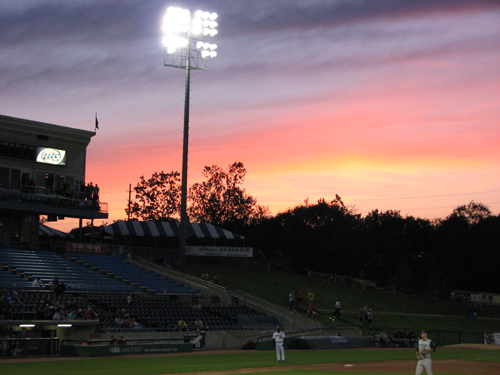 As I watched the Scranton/Wilkes-Barre Yankees beat the Norfolk Tides at PNC Field in June, I could see the observation area high above the ballpark, which you can see toward the top of the image below: 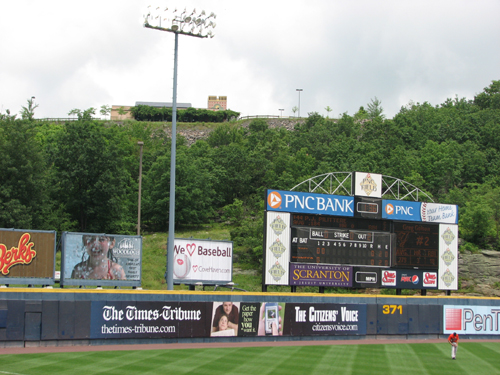 I guessed this area would be a perfect location to shoot an overhead view of the park, so after the final out, I drove up the mountain to look for the lookout. It didn’t take long to find it, and I was able to take the shot below. The trees obstruct a little more than I would’ve liked, but it was still neat to get this view of the park: 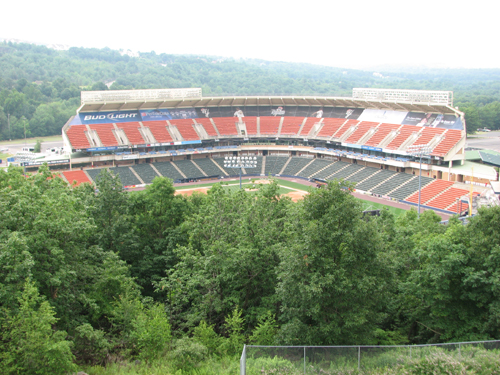 If you haven’t seen the outstanding documentary Playing for Peanuts, you definitely need to check it out. Former Met Wally Backman takes center stage in the documentary and in the scores of extras available on YouTube. I was lucky enough to see Backman up close in Bowie, although I wasn’t quick enough to get an autograph: 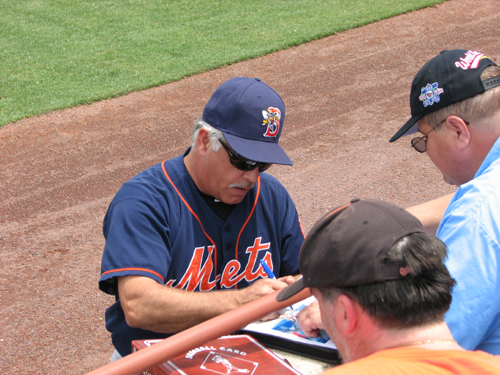 When I was in the nation’s capital to watch the Washington Nationals play three games in July against the Pittsburgh Pirates, I didn’t have time to do any sightseeing. Still, from the upper deck of Nationals park, I could make out the Washington Monument (and also the U.S. Capitol building): 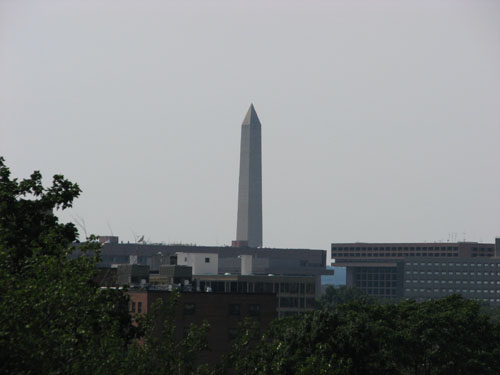 I’m not sure who Uncle Julio is, but he’s represented larger than life on a sign at G. Richard Pfitzner Stadium, home of the Potomac Nationals. Is it just me, or is Julio a little disturbing? 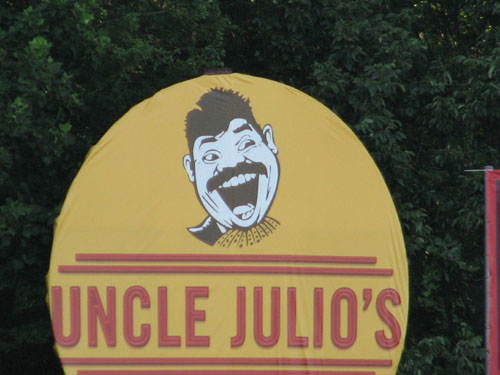 If you plan on visiting Toledo’s Fifth Third Field, make sure to get yourself a copy of the team’s Muddy Times game program. It’s the best I saw this summer. It’s free, has 100+ pages and gives you plenty of interesting things to read while you’re waiting for the game to start or between innings. I blogged about some of the different programs I’ve picked up here. 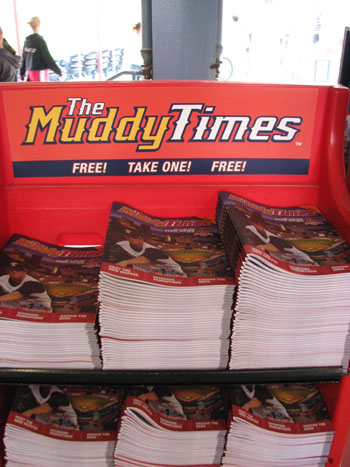 Thanks for reading. Lots more cool content coming soon as I count down the days to 2012 Opening Day and finalize some of my early-season trips.