One of the things I enjoy about visiting a new ballpark is finding the players’ parking lot. It’s usually not hard — just look for the Range Rovers on 24-inch rims.

The players’ lot isn’t visible or accessible at every ballpark. In the Majors, the lots are blocked off or hidden completely, such is the case at Toronto’s Rogers Centre, where the lot is underground.

In Minor League parks, the players’ lot is always easy to find. In some spots, like Rochester’s Frontier Field or Syracuse’s Alliance Bank Stadium, it’s as close or closer to the front gate as the lot where fans park.

I don’t always make a point of looking for the players’ lot, but plan to from now on. Still, in my travels, I’ve been able to take a bunch of photos of some amazing-looking vehicles.

At Cleveland’s Progressive Field, the players park in a walled-in lot at the corner of Carnegie Avenue and East 9th Street. The lot is visible from the street and also from the stadium concourse. This is what the lot looks like from the street: 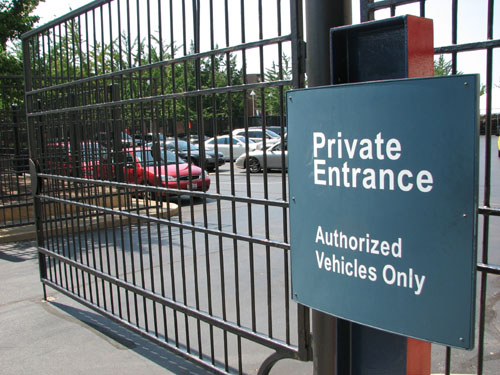 It’s hard to make out too many of the cars in the shot above, but you can clearly see a Porsche just to the left of the words ‘Private Entrance.’

From one spot on the concourse, you’ve got this view of the lot:

And from another area, you can see closer to the gate: 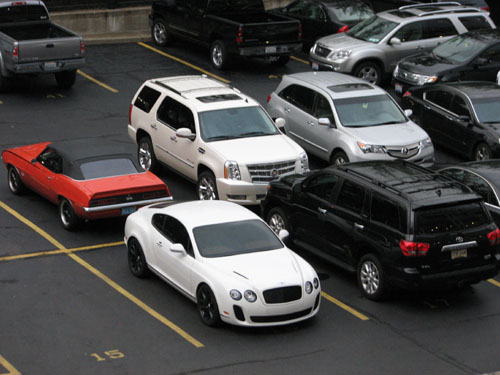 That’s a Bentley in the foreground, an Escalade diagonally above it and a late-1960s Chevrolet Camaro SS in hugger orange.

At Nationals Park, the players’ lot is walled in and located along Potomac Avenue SE. From the concourse, I snapped this photo last July, showing a white Range Rover: 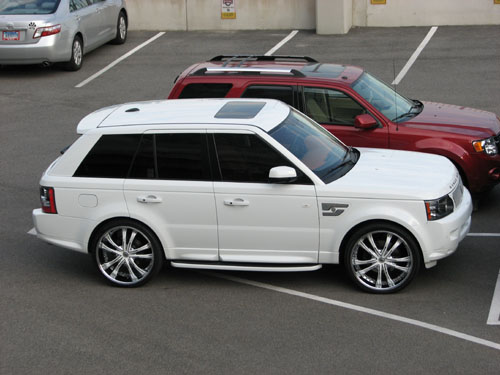 (Hands up if you noticed the Range was parked illegally in the photo.)

At Camden Yards in Baltimore, the players’ lot is situated in the corner of a fan lot between the ballpark and M&T Bank Stadium, home of the NFL’s Ravens: 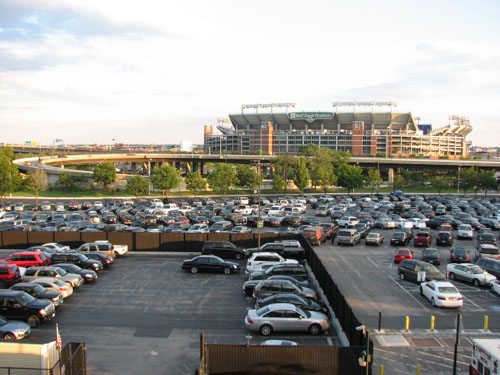 From the concourse, I spotted a Mercedes-Benz and a white Range Rover …

… and a red Range Rover, white Mercedes-Benz and a maroon Cadillac Escalade: 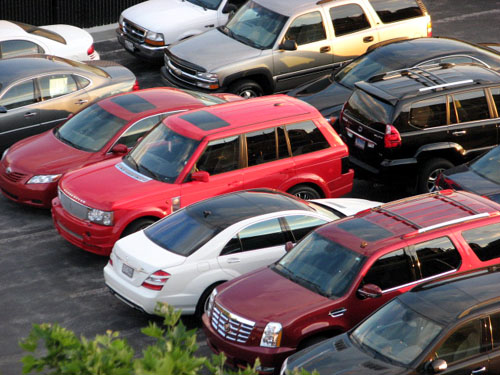 But the players’ lots at the Major League parks aren’t the only ones that feature high-end vehicles. Salaries aren’t high in Minor League Baseball, but if a player received a substantial signing bonus, the odds are good he’ll spend some of it on a sweet set of wheels.

At Alliance Bank Stadium in 2010, I toured the players’ lot and snapped this photo of an Escalade with a custom license plate:

The Aberdeen IronBirds play in the Short-Season A New York-Penn League, so the lot at Ripken Stadium isn’t full of $100,000 cars. But there are some big rims:

Move up through the minors a bit and the cars improve. At Fifth Third Ballpark, home of the West Michigan Whitecaps, this Range Rover stood out among its peers:

If I was a betting man, I’d wager that it belongs to Nick Castellanos, who the Detroit Tigers drafted in 2010 and signed for $3.45 million.

When I visited Bowie’s Prince George’s Stadium last summer, I thought the Pontiac Grand Am stood out a little in the row of Benzes and an Escalade:

Sometimes, it’s fun to try to figure out which vehicle belongs to which player. At New Hampshire’s Northeast Delta Dental Stadium, you can see the players’ lot from behind the first base line. Last summer, I took this photo of an Escalade and a Lincoln Navigator:

The Lincoln has Connecticut plates, and the only player from Connecticut on the Fisher Cats at the time of my visit was Mark Sobolewski, a fourth-round pick of the Blue Jays in the 2008 draft.

The last two photos are of Chevrolet Tahoe trucks, both of which have custom rims. I spotted this one last year at Potomac’s G. Richard Pfitzner Stadium:

And this one at Delmarva’s Arthur W. Perdue Stadium: