What do I have in common with Barry Bonds, Albert Pujols, Ryan Braun and Jose Bautista? Admittedly, not much. But on the morning of June 13, I was lucky enough to tour the Sam Bat baseball bat factory and showroom and see how bats for many of the game’s top sluggers are made. I’ve had the fortune of seeing a ton of cool sights since starting The Ballpark Guide, and this one ranks very high.

Just to bring you up to speed if you’re not familiar with this company, Sam Bat is a bat company based in Canada that was founded in early 1997. The company is most notable for producing the first Major League Baseball-approved maple bat and building the bat of choice for Bonds when he hit his 73rd home run in 2001 and when he chased down — and broke — Hank Aaron’s all-time home run record in 2007. If you want to read more about the company’s history, check out this link on the Sam Bat website.

Sam Bat is one of the top five bat manufacturers in professional baseball in terms of volume and in my opinion, produces some really sharp-looking bats. In 2011, the company produced bats for more than 100 MLB players and many more in Minor League Baseball, as well as the pro leagues in Australia and Mexico. (For the record, Pujols and Bautista don’t use Sam Bats currently, but Pujols did during his awe-inspiring rookie season and it was a Sam Bat in the hands of Bautista during his 54-home run season in 2010.)

Sam Bat is based in a small town called Carleton Place, just outside of Ottawa, Ontario, and I’ve been hoping for a tour for some time. That time finally came on June 13, and I met with company president Arlene Anderson for what would be a nearly two-hour tour and discussion. The company moved locations this past winter and since then, has been setting up its office while churning out bats every day.

It was exciting, for starters, just to be in an environment in which baseball is the focus. I started my tour in the office, where I met Arlene and talked baseball bats and baseball for a while. When you walk into the office, everything around you is baseball-centric, from the plaque on the wall that greets you soon after arrival …

… to the bats on display virtually everywhere you turn: 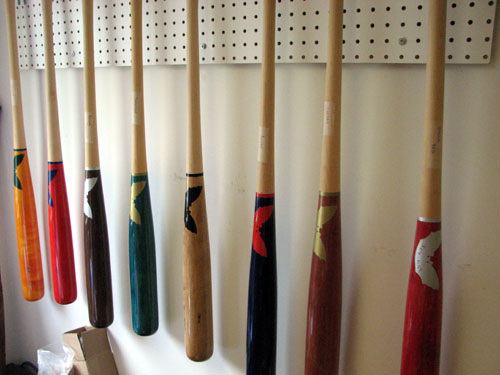 There were mounted clippings from the Ottawa Citizen newspaper, including this front page featuring Sam Bat founder Sam Holman with Barry Bonds: 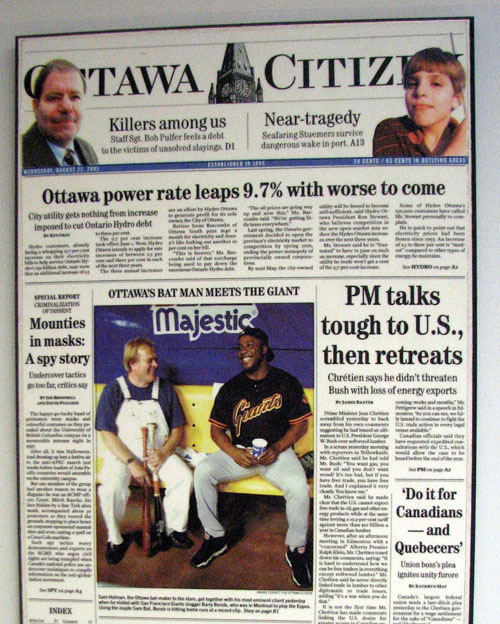 And one with Arlene on the front cover soon after she took over the company:

There were lots of other cool things to see, including this figurine of Pujols. The photo isn’t great because of my reflection in it, but if you look carefully, you’ll see that Pujols’ bat is a Sam Bat: 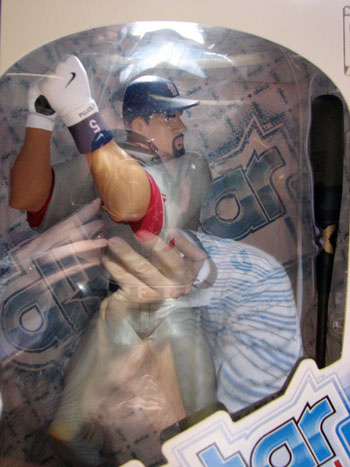 The office also included products that aren’t even sold yet, and Arlene gave me the OK to take photos. So, it’s pretty safe to say you’re seeing these upcoming products for the first time right here. How about some Sam Bat eyeblack?

Or New Era snap-back caps with the Sam Bat logo?

After checking out the office, we went down to the factory part of the building. I’m not going to even try to explain how baseball bats are made; there are better resources online for that. But what I will do is share some behind-the-scenes photos that I think you’ll enjoy. The thing that struck me most about the factory is how the bats are truly made by hand. We’ve all see video clips of bat factories in which virtually the entire process is automated. That’s not even close to what goes on behind the doors at Sam Bat.

When the maple blanks come to the factory, they’re weighed, marked in two ways and stacked here:

One end of the blank is labeled with the number of the lot and after the blank is weighed, the weight is marked on the other end — up to three decimal places. The numbers you’ll see below actually mean, for example, 5.690 pounds or 5.694 pounds, etc.:

The blank goes through an amazing process en route to becoming a bat. It’s cut on a lathe … 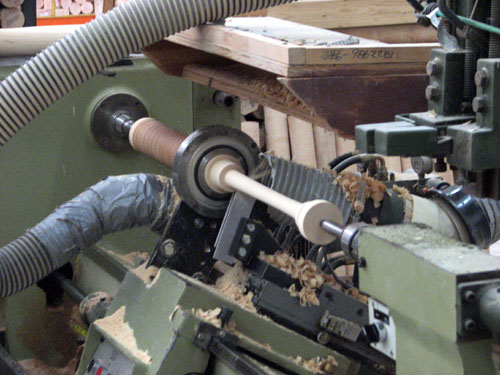 (The bat you see above was actually being made specifically for Los Angeles Dodgers outfielder Andre Ethier, who signed an $85 million contract extension a day earlier. How cool is that?)

After the bat is cut to its rough shape, it’s inspected carefully to ensure the wood doesn’t contain any blemishes or knots. If it does, the bat won’t be used. See the photo below of partially finished bats?

Well, many of these won’t be completed because their wood has a knot that can negatively affect the bat’s integrity. The knot doesn’t have to be big, either. See these tiny marks? 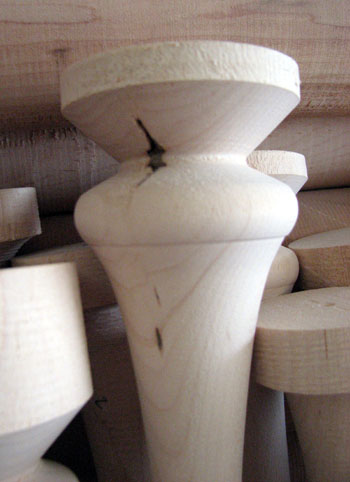 They’re enough to send this bat to the discard pile. If the bat passes these inspection tests, though, it’s sanded by hand …

… and weighed carefully throughout the sanding process on scales like this one: 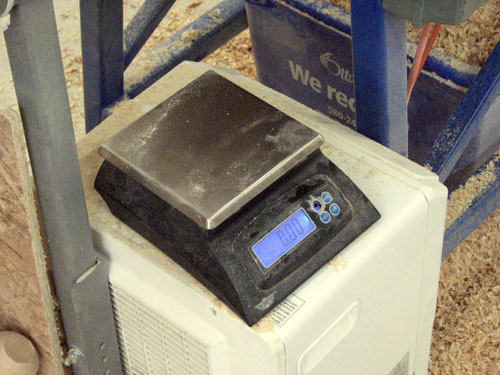 (MLBers are very specific about their bats, as you might imagine. When they like a specific model, they want subsequent bats to have the same length, weight, handle, barrel and knob. That’s part of the reason weighing several times throughout production is important.)

You know the cup that’s cut into the barrel end of many bats? That’s done with this specialized drill bit:

The bat is then run through this machine which smooths the wood. High-quality bats are smooth like a baby’s skin, and it’s this machine that plays a huge role in that trait:

When each bat is ready to be painted, it’s painted by hand. For real. I watched a man hold a bat in one hand and paint the barrel with a paintbrush with the other. Awesome! The painted bats are then hung to dry: 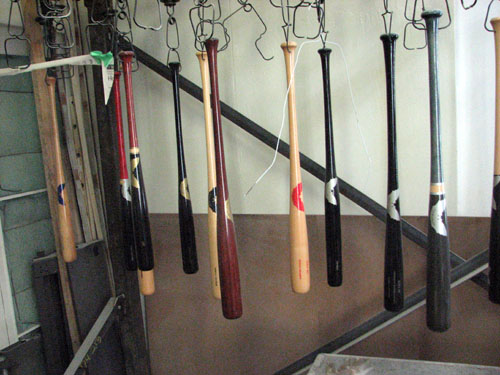 (The bats hanging above are already finished, and just on display in this manner to show the hanging/drying process.)

Then, the distinctive bat logo is added to the middle of the bat, a Made in Canada sticker is placed on the knob and the bats are stacked here where they’ll await their finishing touches:

As you probably know, many players have their names stamped on the barrels of their bats. The bats laid out on this table had just been stamped: 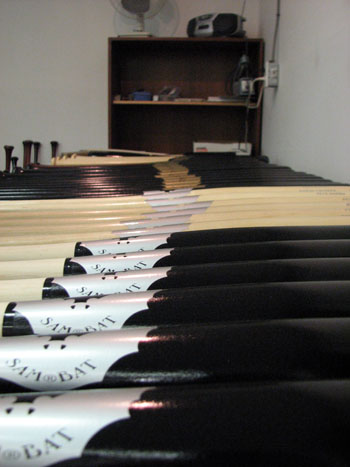 On the day I visited, many of the bats that had just been stamped were for St Louis Cardinals prospect Pete Kozma, who was a 2007 first-round draft pick of the Cards and played 16 games for the club last season. He’s currently playing at the AAA level:

As is the case with the other steps in the Sam Bat-making process, the name stamps are done by hand with great care. Someone literally presses a stamp onto an ink pad and then presses the stamp onto the barrel of the bat. This room was my favorite place in the factory. See the shelf below? All these plastic bins were full of name stamps: 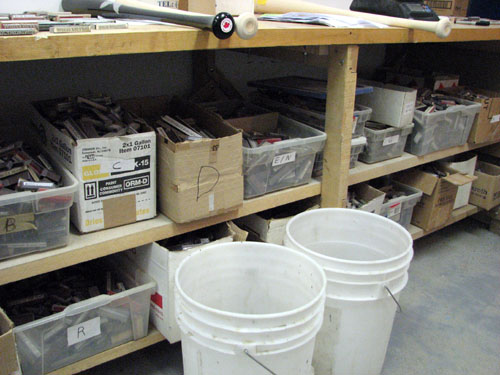 Over the years, Sam Bat has produced bats for a veritable who’s who of baseball. In addition to Bonds, Pujols, Braun and Bautista, other guys who’ve swung Sam Bats in the Big Leagues include Miguel Cabrera, Troy Tulowitzki, Prince Fielder, Matt Holliday, Rickie Weeks, Manny Ramirez, Carlos Gonzalez, Jason Bay and hundreds more. In fact, Sam Bat has a great gallery of many of their top players on their Facebook page. Check out the gallery and note the bat logo on each player’s bat.

On the table above where all the name stamps are stored, a few hundred were lying out, so I couldn’t resist taking a bunch of photos. Click on this photo to enlarge it so you can read all the names: 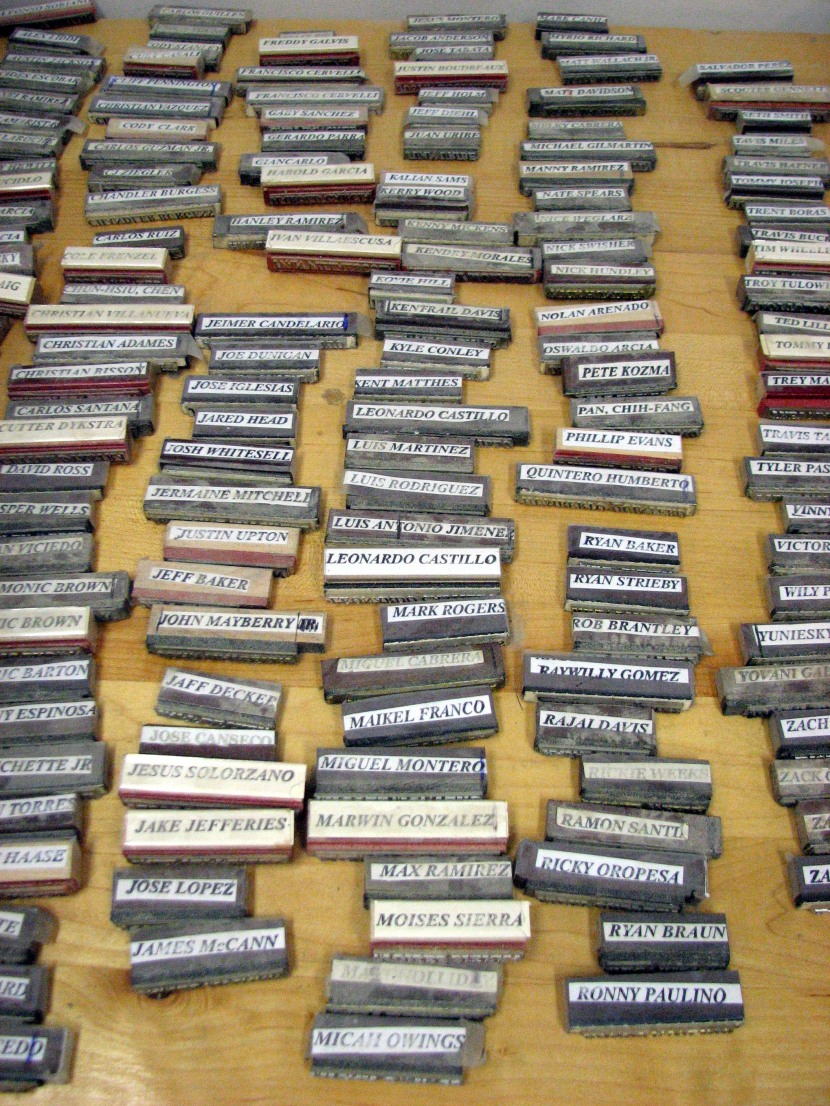 Here’s a close-up of one row that includes Tulowitzki, Victor Martinez and even pitcher Ted Lilly:

Want to look at another photo? I know I do. Here are Soriano, Austin Jackson, Andy Laroche Carlos Guillen and Chris Young:

Some people who order bats (not necessarily MLBers, as the league has lots of guidelines about what’s stamped on bats) get custom slogans, including Who Dares Wins: 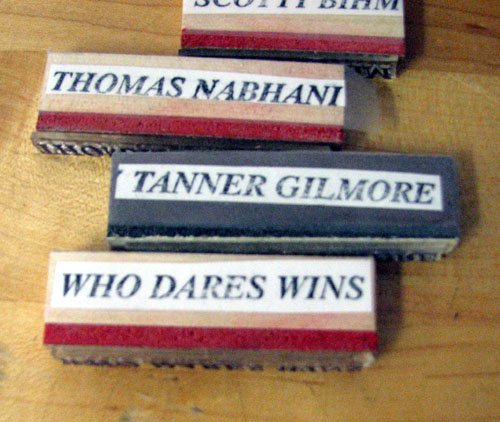 And Drop A Bomb:

One the bats are finished, they’re packaged up … 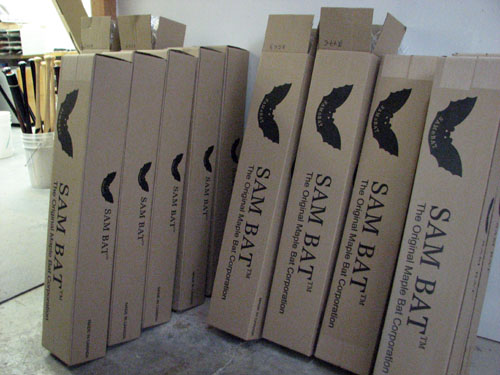 … and placed on a shelf until a shipment is ready to go out. This shelf was pretty bare on the day I visited because a huge order had just been shipped out: 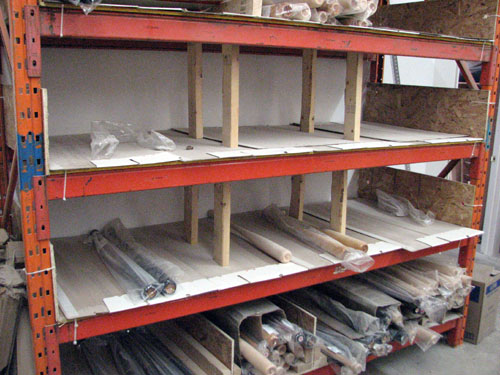 The third destination on our tour was the showroom, which is still being set up. Even though it’s not completely done, it’s the type of place in which any baseball fan would just love to hang out. Of course, there are bats everywhere:

(See the cool bat racks? They’re made from each end of a bat.) 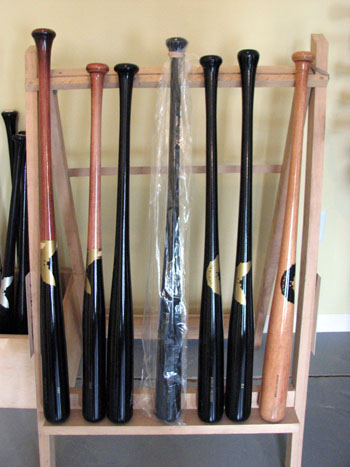 Check out this close-up shot of a barrel. It says RB8, which stands for Ryan Braun and eight, his jersey number:

Braun, who was the National League’s MVP in 2011, is arguably the most notable current Sam Bat user and the poster for his bat is one of the first things you notice upon entering the showroom:

I couldn’t resist checking out one of his bats. The bat I’m holding in the image below is the RB8:

And see this Under Armour ad featuring Soriano? Check out the logo on the bat he’s holding:

The entire tour was outstanding, and it was awesome to learn so much from Arlene. It’s not often that I find someone in Canada who’s as baseball obsessed as I am, but Arlene definitely knows the sport and had some great stories to tell, from texting back and forth about bats with Jose Canseco to getting phone calls and hearing, “This is Alfonso Soriano. I need more bats” on the other end of the line. (Arlene said that most players’ agents make bat inquiries, but Soriano has occasionally taken the matter into his own hands.)

Upon the completion of our tour, Arlene gave me a Sam Bat mini bat: 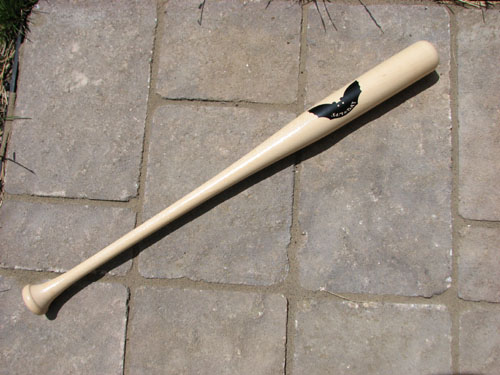 One of the long-sleeve T-shirts that the company gave out to players at Spring Training this year:

And an actual bat! Arlene took a photo of me with my new bat in the showroom: 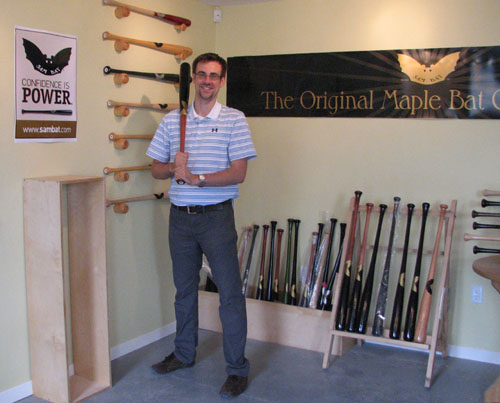 This bat is the B1 model, which stands for Bonds 1. In other words, it’s the first prototype produced for Bonds. The bat is beautiful and I think you’ll agree that it’s a work of art: 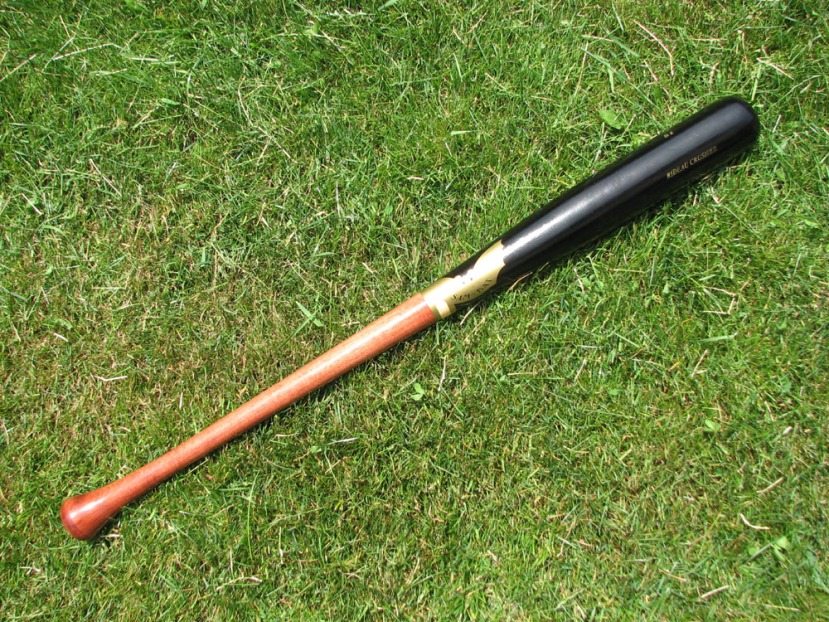 Check out the hand-written notes in the cup at the end of the barrel. These numbers mean the bat is 33.5 inches long, 34.5 ounces (really, really heavy) and then there’s the date it was produced and the model number:

At the other end, there’s a Made in Canada sticker: 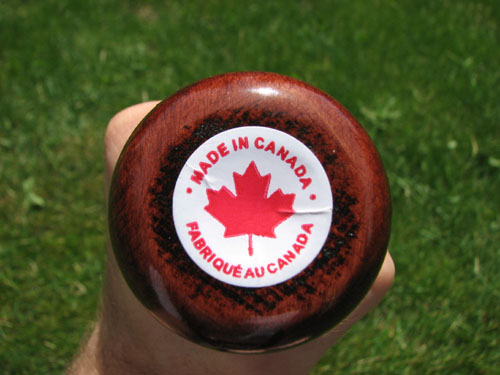 Here are the markings on the barrel: 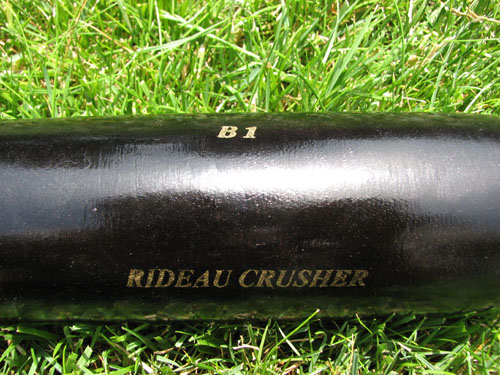 And a close-up shot of the bat logo:

The handle end of the bat is stained in cherry stain, I believe, and it allows the grain to show through:

Sincere thanks to Arlene for taking time out of her busy day to show me around. The visit was absolutely outstanding. For more information on Sam Bat, check out the company’s website, Facebook page and Twitter feed. The website gives you the ability to order a ton of cool stuff, from game-ready bats to trophy bats, which are a little heavier but are otherwise identical to bats meant for use. Sam Bat also sells a line of Little League bats, and those cool New Era caps will be on sale soon. To get in touch with the company, email bats@sambat.com.