I’ve had my May 23 visit to Louisville circled on my calendar since I finalized the dates and cities for this road trip for The Ballpark Guide. Of course, I was looking forward to checking out the Louisville Bats game, but the city also had a couple other tourist attractions I wanted to see. I’ll likely blog about those attractions, which included a tour of the Louisville Slugger Museum, once I’m back home.

After playing tourist for nearly four hours, I checked into my hotel to get ready for the evening’s Bats game. I was staying at the Residence Inn Louisville Downtown, which has an absolutely perfect location for baseball fans. It’s only a block from Louisville Slugger Field, which saves the hassle of being stuck in pre- and post-game traffic and finding parking around the stadium. Because it’s downtown, you can leave your car at the hotel and get to many tourist locations on foot, which is awesome. Who wants to be stuck in traffic when you’re visiting a new city, right? The hotel’s location means there are a ton of restaurants and bars nearby; after the Bats game, I walked a block to get a sub from Jimmy John’s.

I had an awesome room at the Residence Inn — a full kitchen, living room, office area, bedroom and enormous bathroom. Here’s the view from the front door, which shows several of the amenities:

With the exception of the fridge, didn’t use the kitchen because of my short stay, but if I’d been here a few days, everything would’ve definitely come in handy: 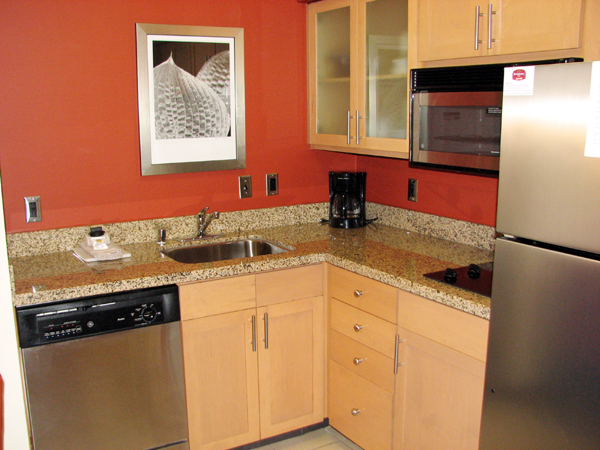 Check out the nice, big bedroom area, too: 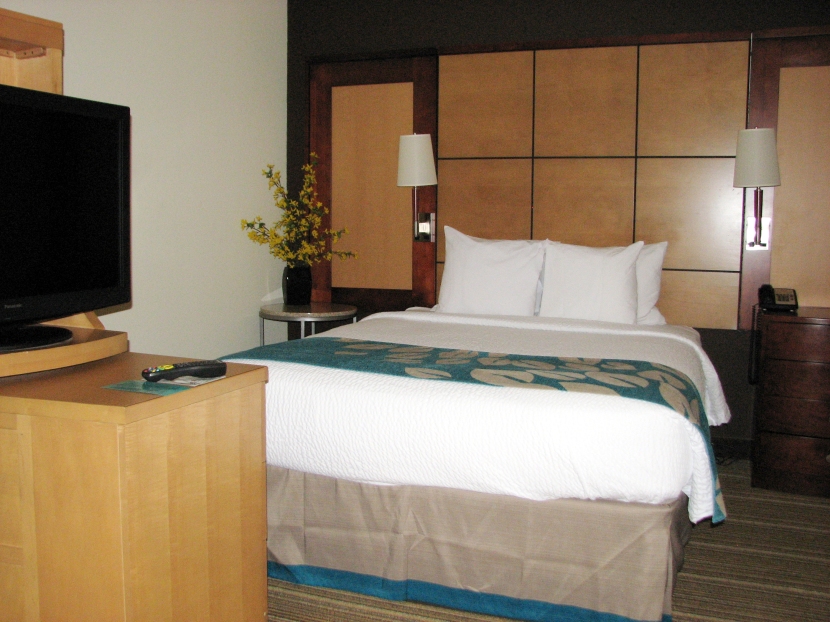 Everything about the hotel was great, and this is definitely the place I’ll book whenever I make it back to Louisville. After catching up on some blogging for little bit, I got ready and made the very short walk to Louisville Slugger Field. Within taking a few steps out of the hotel, here was the view:

And the view improved a moment later, once I’d walked to the front of the ballpark:

Next, I checked out the statue of Baseball Hall of Famer Pee Wee Reese, who was not only from Louisville, but also played nearly 300 games of minor league ball in the city in the late 1930s:

The evening’s game was scheduled for 6:35 p.m., and although I received a media pass that would let me in early, I took some time to walk around the perimeter of the park first. Here’s the back gate: 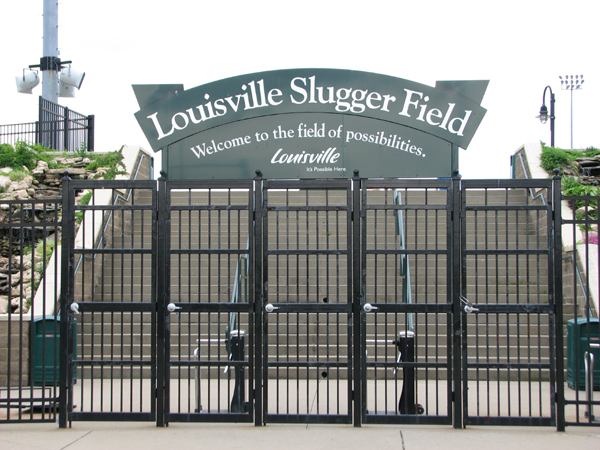 And the back of one of the video boards. There’s certainly no secret about who has the naming rights to the field, is there?

I cut through the players’ parking lot on the way to the park’s main gates, and noticed something I’ve never seen before. Many MiLB parks have designated areas for staff and players, but I’ve never seen a park that has spots specifically marked for its players: 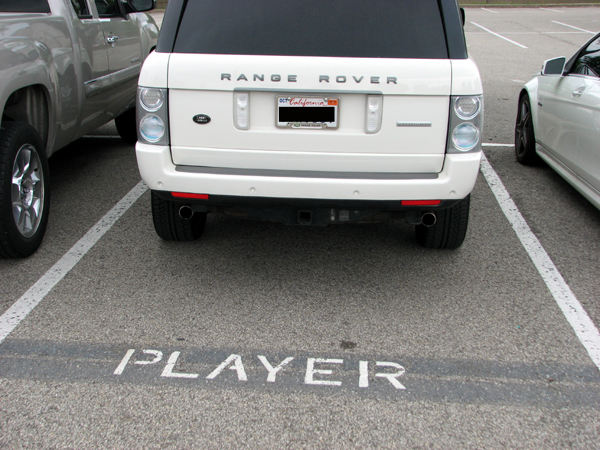 Louisville Slugger Field has one of the most unique entrances you’ll ever encounter. Once you go through the main gates, you’re in an enormous room reminiscent of a historic train station — at least that’s how I see it: 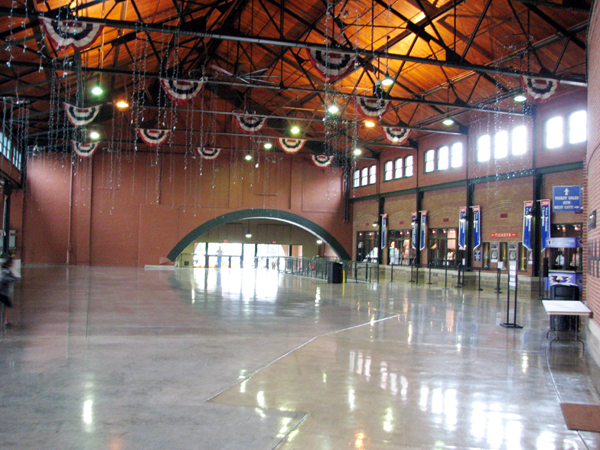 Here’s another shot that shows this area. You enter on the right of the picture and, as you can see, the west gate allows you to get onto the concourse: 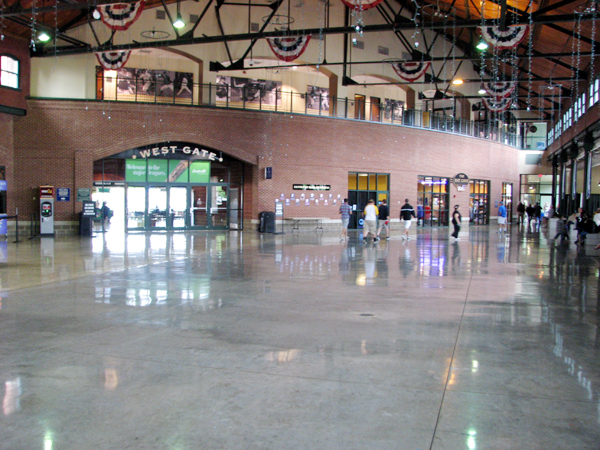 After taking a few more photos, I went through the doors and out to field level. The Bats were taking BP, but had stopped temporarily for a team meeting:

The gates were soon to open, and I noted that it was weird not to see the visiting Pawtucket Red Sox hitting. In baseball, the home team hits first and the visitors hit last. I didn’t think anything more of it, but it was a little curious. After watching the Bats’ meeting for a few minutes from field level, I took a big lap around the field, and stopped to take this panorama from behind the left field fence:

And then went up to the bleachers in right field, which gave me a bird’s-eye view of the park:

From many spots throughout the ballpark, you can see KFC Yum! Center, which is the home of the University of Louisville Cardinals basketball team, which won a national championship this spring:

I continued touring around and at 5:30 p.m., the gates opened and an enormous crowd quickly filled up the park. Why? Well, you could argue that their love of the game brought these people in, but a better argument might be $1 beer night. I’ll leave that debate up to you. Less than 30 minutes after the gates opened, check out the crowd on the outfield concourse:

I hadn’t made up my mind about what to eat for dinner, but since I’d skipped lunch, I was ready to find something to fill my stomach. I noticed that Papa John’s pizzas were available in the park, given the company is originally from Louisville, and decided to try one:

It was all right; not nearly as good as a regular Papa John’s and a little pricey at $7.50, but it was an OK pizza for a ballpark. While I ate in the seats in left field, I casually looked to my left and a notice on the video board caught my eye:

Baaaa! I soon heard ushers saying that Pawtucket hadn’t even arrived yet, which mean there was no way this game was going to start any time soon. I’d already been in the park for more than an hour, and when the team announced that the 6:35 p.m. start time would be pushed back to around 7:40 p.m., I got a brain wave. Instead of sitting here staring at the empty field, I decided to zip back to my hotel to write a little more. Perfect! My media pass gave me in-out privileges so there was no problem there, and I got a bunch more writing done before walking back to the ballpark just after 7:30 p.m. Another reason to be happy about my hotel and its location.

The game was just minutes from starting by the time I found a seat on the first base side. I wanted to be close to field level to watch Bats outfielder Billy Hamilton, who’s known as the Man of Steal. If you haven’t heard of him, he’s the most proficient base stealer in the game right now and one of the best in history already in his young career. With Dayton in 2011, he stole 103 bases. Last year, splitting time between Bakersfield and Pensacola, he swiped 155. This season is his first shot at Triple-A ball, and while his numbers aren’t quite as crazy, I wanted to see him steal a base.

As you might expect, Hamilton bats leadoff for the Bats and I was pumped when he came to the plate in the bottom of the first. I wasn’t the only one. There was a noticeable energy in the park when Hamilton was a bat — this is a guy who routinely gets infield hits and then steals second and third, and people were taking notice. Hamilton hit a single and as he took his lead, people went nuts: 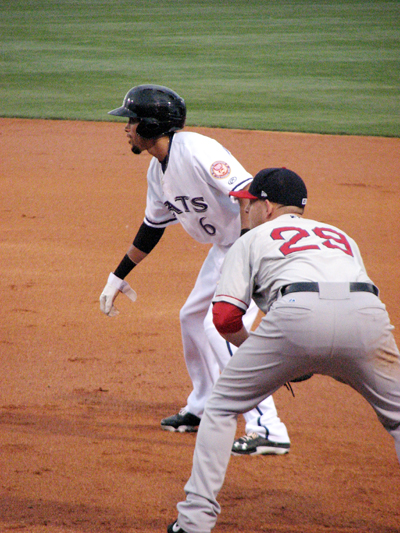 You know the baseball slow clap? People were using that rhythm to chant “go.” It was awesome — “Go     go    go   go  go gogogogogogogo!” Hamilton reached second on a groundout by the third hitter in the order, and then promptly swiped third base after a pitch. The Pawtucket catcher didn’t get the ball back to the pitcher promptly, and in a blink, Hamilton was standing on third: 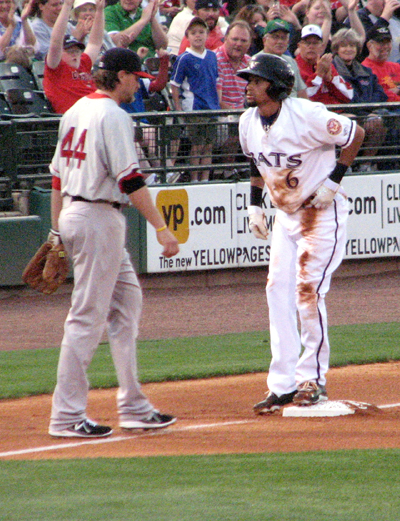 I love home runs, but I’ve always been drawn to the speed side of the game. Having guys who can run adds such a great dynamic to any team, and it was great to finally see baseball’s premiere speedster live in action. Hamilton had a great game with two hits and two runs scored, and the Bats looked unstoppable. They scored runs in each of the first four innings and pounded the Red Sox 10-0.

From my spot behind the first base dugout, I was just a few feet away from pitcher Alfredo Aceves, who’s been up and down this season and has been recalled back to Boston since I saw him: 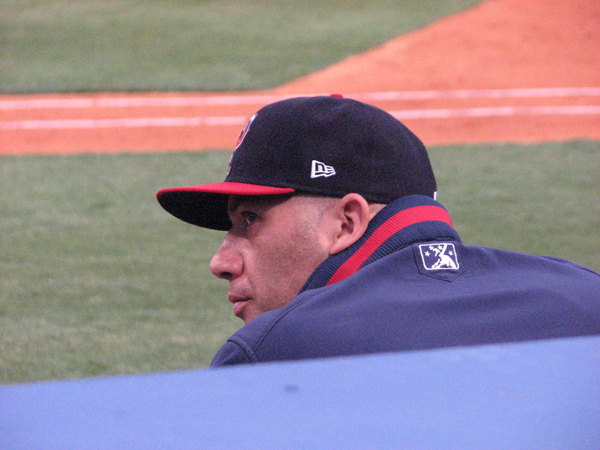 Since I’d spent ample time walking around the ballpark before the game, I stayed put for most of this one. It was awesome to be in the front row behind the dugout and watch the game from that angle. Louisville Slugger Field is the ninth International League ballpark I’ve visited since 2010 — just five more to go!