Did you read my last blog post about my visit to Great American Ball Park and my meeting with a member of the Baseball Hall of Fame? I sure hope so, but if not, you can check it out here.

I was scheduled to catch a second game in Cincinnati on May 25 on this road trip, and unlike the previous day’s evening game, this one started at 4 p.m. I’m not usually a huge fan of the 4 p.m. start time, but on this day, it worked out well. I blogged in my hotel until around 11 a.m., and then checked out, loaded my car and drove about a block to find parking for the day. Fortunately, I was able to score a $10 parking lot, which seems pretty impressive given that it was a block from the ballpark. How many other cities can boast this? Boston, I’m sending a somewhat evil eye your way.

Because I was essentially at Great American Ball Park more than four hours before it opened, I decided to check out a couple other sports-related things in the area. My first stop was a largely deserted Paul Brown Stadium, home of the NFL’s Bengals:

Before my next stop, I stopped at a Jimmy John’s a couple blocks from the ballpark and bought a sub, which I ate right next to the re-entry gate, which is the gate I referenced in my previous post:

After eating, I took the very short walk to the Cincinnati Reds Hall of Fame, which is connected to the team shop. I’d read about the HOF during the previous day’s visit, and decided to hit it before I left town. The hall had a special autograph exhibit, in which it had featured all but 15 players from the Reds history. Think about that for a second. The team’s history dates back more than a century, and in that time, thousands of players have suited up for the Reds. This was the single most impressive autograph collection I’ve ever encountered. I’m going to write a separate blog post about it, but in the meantime, here’s a photo that shows how many of the autographs were displayed: 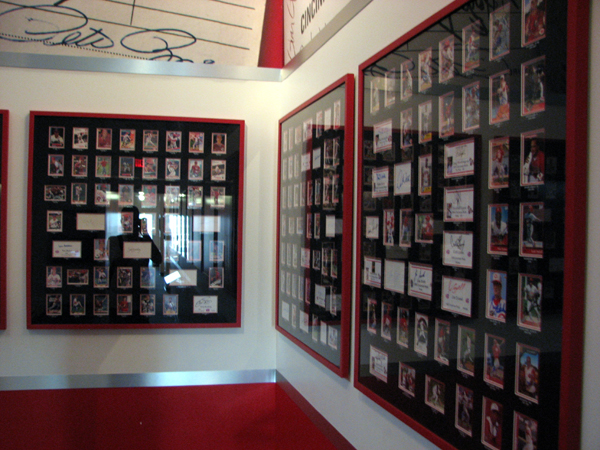 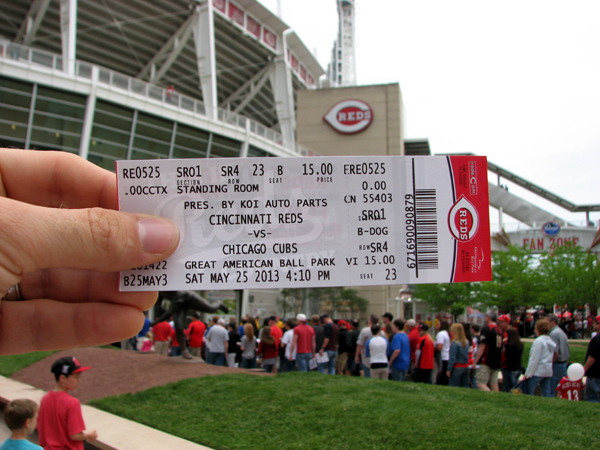 … and heading over to the long lineup at the front gate. The day’s giveaway was an MLB Network drawstring bag, and as is typically the case when there’s a good giveaway, there were lots of people eagerly waiting:

Upon getting through the gate and getting my bag, I headed straight for the left field seats to watch batting practice. This was my view during the 20 or so minutes I watched the Cubs hitting: 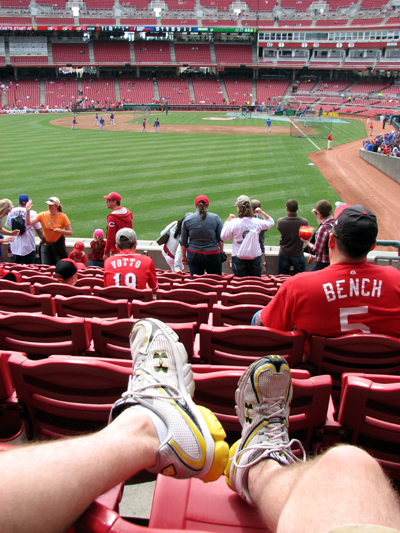 Yes, I’m sitting down with my feet up on the seat in front of me. Why? Because in those 20 minutes, not one ball entered the left field seats. Perhaps this is part of the reason the Cubbies are 14 games out of first place. Given that this BP session was much like watching paint dry, I decided to go down to the field level seats on the third base side. I wasn’t sure what security would be like, and when I sauntered past a guard and descended toward the field, I heard him say something behind me. Ugh. I turned around, expecting to be asked to leave or show my ticket, and said, “Pardon?” He responded with, “How’s it going?” WOW! I’ve apparently put up with too many years of Rogers Centre ushers. Imagine an usher asking how you’re doing, rather than trying to pull a heavy on you? Unbelievable.

Anyway, it was good to get down to field level, especially when Alfonso Soriano walked past less than a minute later:

It’s hard to see it in the photo above, but instead of having his name stitched into his glove, Soriano has “El Monstruo.” Now, I didn’t take Spanish in high school, but I’m guessing that means “The Monster.” One more note on Soriano — last year, I toured the Sam Bat factory, which is the company that makes bats for “El Monstruo” and many other MLBers. You can read about that awesome tour here.

Watching BP is fun, but I always get a kick out of infield practice. And from my vantage point next to the Cubs dugout, I had a great view of the action. Here’s third baseman Luis Valbuena making a throw: 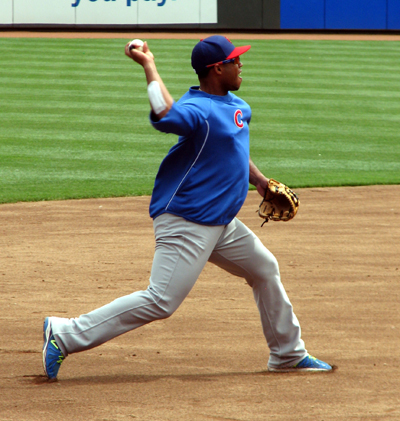 I hung out there until BP wrapped up, and then went all the way up to the upper deck, where I’d also explored a day earlier. As the grounds crew worked to get the field ready, I took the photos to make up this huge panorama:

Next, I stopped to see the Machine Room bar and the Power Alley Patio, the latter of which is pictured below. It’s a group picnic area, but what a spot to watch a ballgame!

When the game began, I found a standing room spot on the first base side of home plate and just hung out and watched the action. From here, I had a pretty clear view of the plate, which allowed me to get shots like this one of Starlin Castro fouling off a pitch: 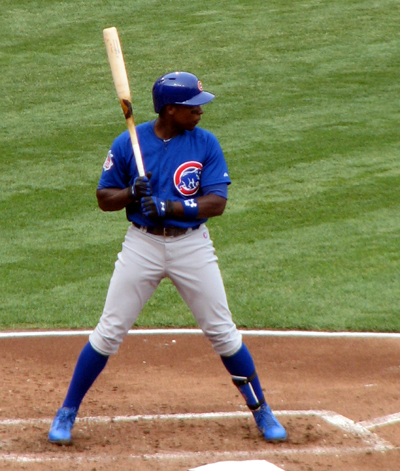 Turns out that very photo of Soriano and his Sam Bat might’ve been the last photo taken of the bat. On the next pitch, here’s what happened: 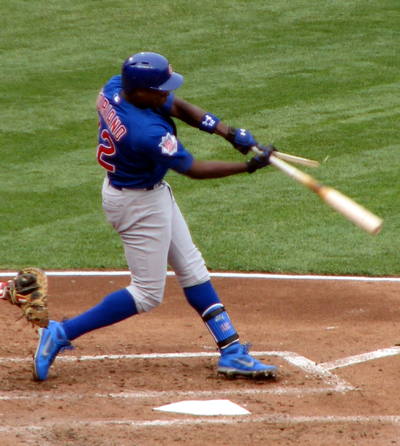 A quick note about Reds fans — they’re extremely passionate and both games I attended in Cincinnati had huge crowds. I took this photo to show just how packed the ballpark was:

(The photo sort of reminds me of the heavy crowd I captured last season at Fenway Park. I took a similar photo in this post.)

Next, I took a walk around the concourse where I ran into a good exchange between three drunken fans and a quickly growing contingent of the Cincinnati Police Department. Here’s the abridged version:

Drunken woman mouths off at other fans. Fans mouth back. Back-and-forth arguing ensues. Security and cops are summoned. Friend #1 of drunken woman tries to get between her and cops. Bad idea. He gets told to back off. He ignores request. He gets taken to the ground and handcuffed. Friend #2 whips out his cellphone camera in attempt to be a hero and document the “police brutality.” Cop doesn’t like Friend #2’s fast movement and draws and points his Tazer. Cop says, “Reach into your pocket again and see what happens.” Friend #2 tries to gain sympathy from the crowd that has gathered. No one is impressed. Friend #1 gets taken to jail. Drunken woman and Friend #2 get kicked out of ballpark. I continue on my walk.

One of the features about Great American Ball Park that continuously caught my eye was the view. Don’t get me wrong — the view inside the park is great, but the view outside the park is spectacular. I love being up high in a ballpark and being able to look out over the city. Because the park is next to the Ohio River, the view is impressive:

Did you click on the above panorama? It looks better when it’s big. Back to the game: In the sixth inning, I got this cool picture of Todd Frazier. On this hit, he drove in Votto to tie the game 2-2:

That sixth inning proved to be the difference for the Reds, who scored four runs in the frame and won 5-2. Aroldis Chapman closed out the game once again, fanning two batters in the process.

Once things had wrapped up, I made the very quick walk back to my car and after getting caught in the traffic jams caused by the Taste of Cincinnati event, which was taking place downtown that weekend, made the short drive to my hotel for the night.

This time, I was staying a little outside the city, but still just an eight-minute drive from Great American Ball Park. My hotel was the Kingsgate Marriott Conference Center at the University of Cincinnati which, as you might guess, is on the university’s campus. Despite being so close to the city, the campus is very green, which was cool to see. In fact, here’s the view out my window: 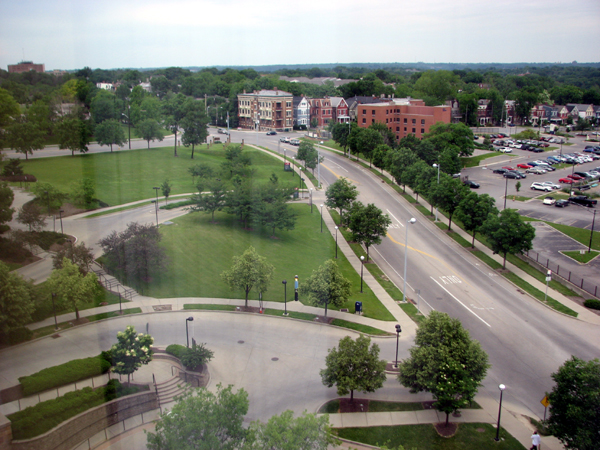 The staff members I dealt with at this hotel were hugely helpful and friendly, and even offered me a complimentary drink from the cooler in the snack area. As far as the room, I had a nice, big room with lots of natural light, as it had windows on two sides. The room amenities were up to the usual standards of the Marriott chain — comfy bed, desk, big TV, large bathroom, and so on. This hotel currently ranks seventh among Cincinnati hotels on Tripadvisor. Here’s a look at the room from the front hallway: 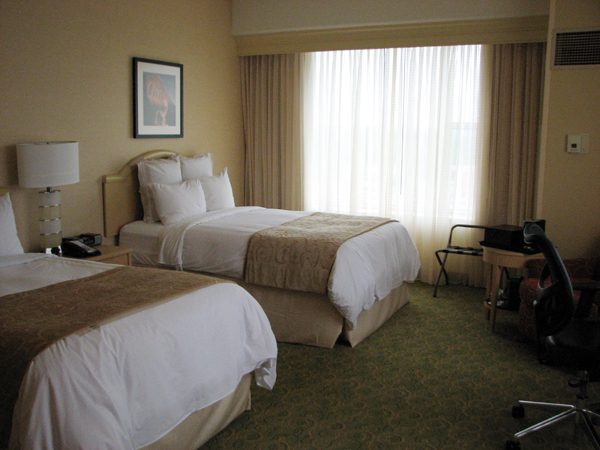 And the desk and TV:

If you’re a baseball fan visiting Cincy for a Reds game, I definitely recommend this hotel, especially if you enjoy staying slightly outside the city but not overly far away from all the attractions. The hotel is just a few minutes from two cool University of Cincinnati stadiums — Nippert Stadium, home of the Bearcats football team and Marge Schott Stadium, home of the baseball team. I didn’t make time to visit both stadiums, but wish I had. Nearby sports facilities aside, the Marriott Conference Center at the University of Cincinnati is close to a long list of eateries; there’s a Papa John’s less than a mile away and after getting settled into my room, I ordered a pizza while I blogged and watched a ballgame on TV to round out a perfect day. If you aren’t into fast food, the hotel has a pair of eateries — an upscale restaurant called Caminetto and a casual bar called the Bearcat Lounge.

The next morning, I got up early and punched Bowling Green, KY, into my GPS. The adventure continues!