After pulling the plug on my Metro Bank Park visit in Harrisburg because of the rain delay, I drove through crazy storms to get to State College, PA. If you’re a baseball fan, you’ll know the New York-Penn League’s Spikes play here. If you’re an overall sports fan, you’ll recognize State College as the home of Penn State University.

Although seeing the Spikes host the Mahoning Valley Scrappers at Medlar Field at Lubrano Park was my priority, I also wanted to check out the Penn State campus and, in particular, Beaver Stadium. Fortunately, the ballpark and football stadium are across the road from one another. (Penn State’s baseball team shares use of Medlar Field at Lubrano Park, for the record.) I parked in the media lot and, upon exiting my car, I had this view of the ballpark to my right:

And when I turned to my left, there was Beaver Stadium:

The Penn State campus is in immaculate shape and must have an enormous crew of workers keeping it that way. I took this shot as I followed the sidewalk that runs alongside the road between the ballpark and stadium to give an idea of just how great everything looks: 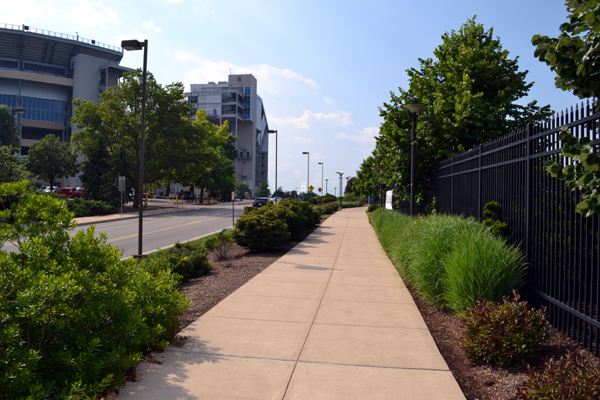 After picking up the media pass that Joe Putnam had left for me, I took my customary lap around the ballpark. As I passed through the field behind the outfield fence, I got this neat shot that shows Beaver Stadium looming high above:

Next up was a lap around the football stadium, which obviously took much longer than a walk around the ballpark. I was struck at the size of the complex; I’ve been to a number of NFL and NCAA stadiums, but it’s easy to forget how huge they are until you’re standing in front of them. During my walk, I couldn’t help notice the new-look area on the east side of the stadium, which is where the Joe Paterno statue used to stand. Looking at the picture below, you’d hardly know this was the spot you’ve seen a million times on TV, right?

With my exterior sightseeing wrapped up, I entered the park and took the first door I saw, thinking it would lead up to the press box. The stairs only went down, however, so I curiously followed them …

… until I got to the bottom, looked in the tiny window in the door and saw a bunch of players sitting in their clubhouse. Oops. I quickly found an elevator up to the park’s suite level where I had another great view of Beaver Stadium:

In the press box, I met with Joe and talked about the ballpark for a few minutes. The press box view from Medlar Field at Lubrano Park has to be one of the nicest in baseball. Every good view had its own perks, but you can’t deny how great this view is:

That’s Mount Nittany in the distance and, yes, I realize the view is slightly hampered by the tarp on the field. It was that kind of day, unfortunately. After talking with Joe for another few minutes, I went down to the concourse and started my tour with a stop in the team shop. It’s technically in the ballpark, but its in its own building at the front of the park. I spent a few minutes checking out the Spikes and Nittany Lions gear …

… and by the time I was ready to leave, this was the view out the window:

Uh-oh. I dashed through the open pavilion between the team shop and the covered concourse, getting soaked in the process. When I was safely beneath the concourse, here’s what the seating area looked like:

Fortunately, the rain stopped as quickly as it had started and soon enough, the Spikes announced the game’s start time would be pushed back to 7:20 p.m., which wasn’t bad, all things considered. I spent the time touring the concourse and taking photos, as you might imagine. Check out this view of the ballpark, Beaver Stadium in the background and the sky that looks like it hadn’t just poured five minutes ago:

By now, I was hungry and debating between a couple items that caught my eye. There’s a stand in the right field corner that sells gourmet burgers, and Joe recommended the Nittany Lion burger — two half-pound patties, two pieces of cheese and the usual lettuce, onions, tomato, etc. The stand also had some other tasty-looking burgers, but I decided to pass in favor of a hot dog from a stand on the third base side. These weren’t any regular hot dogs, either. They were loaded with a variety of toppings and after a recommendation from the guys working the concession stand, I chose the Firecracker — a hot dog on a pretzel bun loaded with shredded spicy chicken, pepper jack cheese, jalapeno peppers and chipotle mayo:

Despite being challenging to eat, as you might suspect, it was tasty. I wasn’t a fan of the pretzel bun, as it just seemed like a dense, semi-stale normal bun. The toppings were good, though. After eating, I moved down close to field level to take some action shots. I really like this three-shot series of Scrappers third baseman Robel Garcia:

Three or four innings into the game, as I was sitting in the second row on the first base side, a player hit a foul ball a mile in the air. I watched it drift toward the seats and realized it was going to land pretty darned close to me. As I was busy taking photos, I didn’t have my glove ready and wasn’t going to try to make a barehanded catch. I think one of the silliest things you can do if a foul ball is heading your way is to panic and run. When you take your eyes off the ball, you’re more at risk of getting walloped. I calmly watched it reach its apex and start to descend, and remember thinking, “This ball is going to land right on my head. What are the odds of that?” As it sped toward me, I watched and watched and finally turned my shoulder and ducked out the way at the last second, hearing it smash off the aluminum steps right beside me. It bounced away and I decided I was happy to give up the chance for a foul ball in favor of keeping my camera gear intact.

I sat in that same seat until the fifth, when I began another walking tour of the ballpark. While walking down the concourse on the third base side, I liked how the park’s video board looked with Mount Nittany behind it: 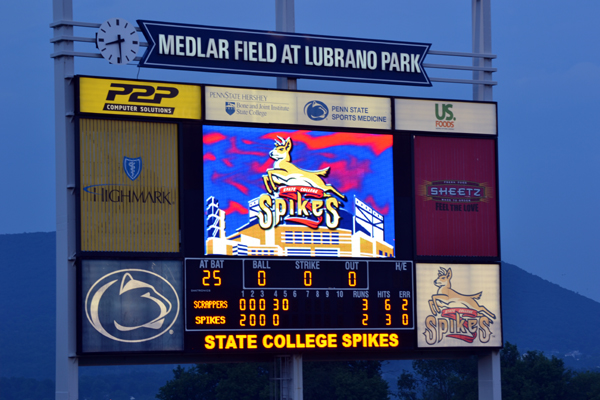 In the seventh inning, I made a quick trip out to my car for a moment and as I walked, heard the sound of a ball smacking off asphalt just a few feet away — apparently I was wearing my foul ball magnet shirt today. I turned quickly and sure enough, saw a ball bounce high off the ground, rattle between two cars and land on the grass. The area was completely deserted, so I had no trouble walking over and grabbing it:

I quickly realized that being temporarily outside the park, I had no idea who hit it. Not the end of the world, but I like to know these things. I considered sprinting back to the park to check the video board or running around toward the outfield where I could see the video board, but then had a better idea. I waited for the PA announcer to introduce Mahoning Valley batter Ryan Battaglia, which meant the previous batter — and the one who hit my foul ball — was Paul Hendrix. At the time, Hendrix was just 11 games into his professional career. He was drafted in the 18th round of this year’s draft out of TCU by Cleveland. It’ll be fun to follow his progress.

Hendrix and his teammates fell 4-3 to State College in an exciting, 20-hit game. Once things wrapped up, I was happy to only have to drive a couple minutes to my hotel. My hotel for the evening was the Country Inn & Suites State College, which sits less than two miles from Medlar Field at Lubrano Park and is a perfect choice for baseball fans visiting the area. It’s only about a year old, too, which means it’s exceptionally clean and almost has that “new car” smell. Its location is perfect, too. There are dozens of shopping and dining choices about five minutes away, and after the game, I stopped at a supermarket at the edge of the Penn State campus to grab some snacks.

Here’s a shot of the exterior of the hotel at night:

I was excited to check in and see my room, given all I’d read about this hotel before my visit. It’s ranked second among State College hotels on TripAdvisor and has a 95 percent approval rating. Before I got to my room, though, I was impressed with the front desk staff. I’ve said before that some front desk people act inconvenienced that you’re checking in, but the people I dealt with at the Country Inn & Suites were outstanding — friendly, helpful and warm. About 10 minutes after getting to my room, one of the people at the front desk called to make sure I was happy with everything. The room was a suite and was huge. Here’s a shot of the desk and living room area:

The basket of complimentary treats left in my room:

And a shot from the door, which shows just how big everything is:

I love suite hotels for my baseball road trips. When you’re stuck in the car for hours a day, it’s nice to get to your hotel and be able to spread out a little, and this room definitely gave me that feeling. It’s cool to sit at the desk, work on my blog and watch Sportcenter, and then head down the hall to the bedroom to sleep. It’s sort of like being at home, actually. And speaking of sleeping, here’s the king-sized bed:

I didn’t take a photo of it, but you could also see the very top of Beaver Stadium out my window. Pretty awesome. I definitely know where I’ll be staying whenever I return to State College.

In the meantime, though, the road trip continues! Next up, another NYPL franchise — the Williamsport Crosscutters.