One day after a marathon, 24-inning doubleheader at Citizens Bank Park, I got up early to work on my blog for a very short period before hopping in the car for the half-hour drive to the ballpark. My road trip for The Ballpark Guide was rolling on, despite averaging about five hours of sleep over the last week.

On my first visit to CBP, I parked for $15 but on my subsequent walking tour, came across a $10 lot even closer to the ballpark’s gates. Go figure. That’s where I headed during this visit and, after parking and walking for a couple minutes down a side street, here’s what I was looking at:

I was in plenty of time for the 1:35 p.m. start; instead of rushing to buy my ticket as I had a day earlier, I took a quick lap around the ballpark, stopping to note McFadden’s Restaurant and Saloon, which you can enter before the gates open: 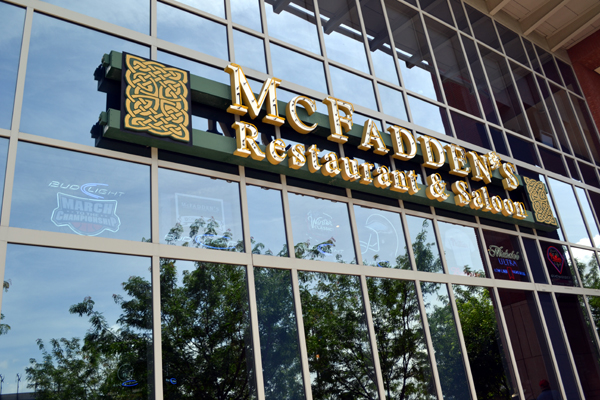 Of course, with it being about 10:30 a.m., a greasy cheesesteak wasn’t exactly what I wanted just yet. Instead, I went to the corner of Pattinson Avenue and South 11th Street to take a series of photos to make this panorama. Because the crowds weren’t too heavy yet, I think this shot gives you a cool look at what the area looks like:

After taking a series of photos that show Citizens Bank Park parking options, which I’ll show on my website rather than here, I grabbed my ticket … 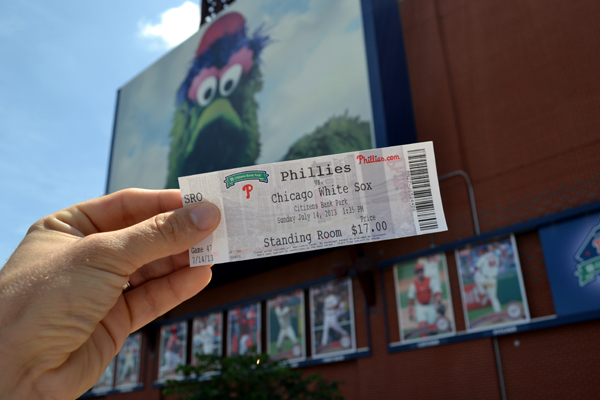 … and picked up the day’s giveaway item, a Phillies travel mug:

Being able to get into the park soon after it opened gave me the ability to get down to field level without crazy fan traffic. I headed to the third base side first and watched a handful of White Sox sign autographs for kids. While here, I snapped this photo of Hector Santiago signing an autograph:

I then made a beeline over to the first base side where a number of Phillies were hanging around. My mission wasn’t to get autographs; instead, I was hoping to get some up-close shots of some players, which I’d failed to do a day earlier. As I watched a couple pitchers signing autographs, my eye caught a tall player out toward center field, and I instantly recognized him:

Doc! I had no idea Roy Halladay would even be in Philly during my visit, Halladay played catch for several minutes as he continues to rehab after his shoulder surgery this spring. It was absolutely awesome to watch him. After his throwing session, he and a coach stood in right field and talked for several minutes:

Halladay then made the long walk to the Phillies dugout and disappeared, while I stood grinning like a nerd, I’m sure, that I just happened to see him for the first time since he played for Toronto:

About an hour before first pitch, I decided to get some lunch, Philly-style. Faced with the prospect of choosing between the park’s three cheesesteak vendors, I picked Campo’s. As I waited in the sizable line, I heard a commotion behind me and as I turned, I saw former Phillies slugger Greg Luzinski walking past. That’s him with the tan shirt and ridiculous calves: 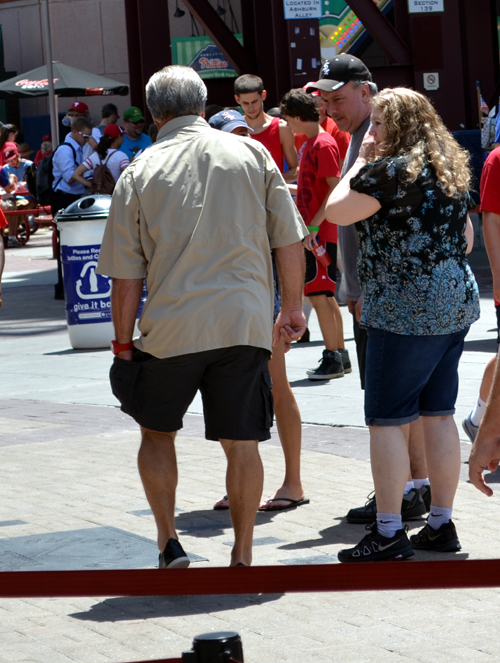 Once I grabbed my cheesesteak from Campo’s, I went up to the Budweiser rooftop, climbed up the small set of bleachers and took this photo:

And then this one:

As for my verdict? It was … good. I realize that’s not the best adjective to assign anything, but this cheesesteak certainly wasn’t great, nor was it awful. The next time I’m in Philly, I’ll have to try the other brands of cheesesteak at CBP to make a comparison, but I wasn’t overly impressed with the Campo’s selection. Of course, every cheesesteak company bills itself as the best in the city, so I had to start somewhere.

As I sat on the bleachers, an usher ventured over to ask if I had a ticket for the section. I explained that I didn’t, but I was using the empty bleachers as a spot to eat my meal, and then I’d be gone. I expected the the usher to tell me to get lost, but she was fine with me sitting there and asked where I was sitting. I explained that I had a standing-room ticket and, after furtively glancing around, she took about five minutes to explain to me how to sneak into certain sections to grab a seat without being caught by ushers. Not a conversation you’ll come across every day, right?

My next stop was in the upper deck. From my vantage spot, I could look down at a semi-crowded Ashburn Alley:

If you look carefully, you’ll see a number of bronze-colored plaques embedded in the bricks down the length of the alley. They represent different standout players from throughout the team’s history — great idea, right? Yes, but what an awful location. Whenever I visit a park, I love looking at the historical displays, but these are virtually impossible to admire. Any time you’re in Ashburn Alley, so too are hundreds of other fans, which means several hundred feet are continuously trampling over the plaques. What a bad design idea.

I was enjoying my spot in the shade because, like yesterday, it was extremely hot again at Citizens Bank Park. As I kept out of the sun for a few minutes, I took this panorama that shows the relatively empty seats about 45 minutes before first pitch:

Remember yesterday’s post, in which I stood right beneath the green Citizens Bank Park sign beyond center field? Here’s another shot of that area, but this one also shows the Liberty Bell:

Before I left the upper deck, I walked over to the seats behind home plate to get this shot, which I think looks pretty cool. Every ballpark, of course, has a unique view with some perks and some drawbacks, but I love how you can see downtown Philadelphia here: 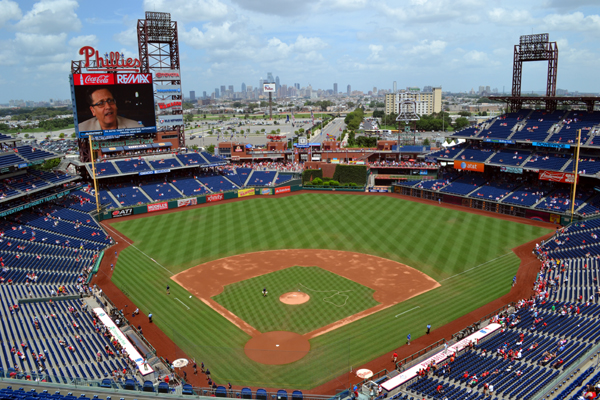 By the time I got back down to the 100 Level, there was still a good amount of time till first pitch, so I headed to the Memory Lane area off Ashburn Alley to see if I could get a close-up view of some of the plaques I couldn’t see yesterday. Unfortunately, the area was once again blocked off (it was open when I was in the upper deck) so the closest I could get to the plaque area was this:

I spent right up until game time checking out the silent auction tables on the concourse. I love when teams do this and, while the prices are mostly crazily inflated, it’s fun to check out a variety of autographed and game-used memorabilia. Here are a couple game-used jerseys from John Mayberry, Jr. and Domonic Brown, for example:

And an autographed Chase Utley bat: 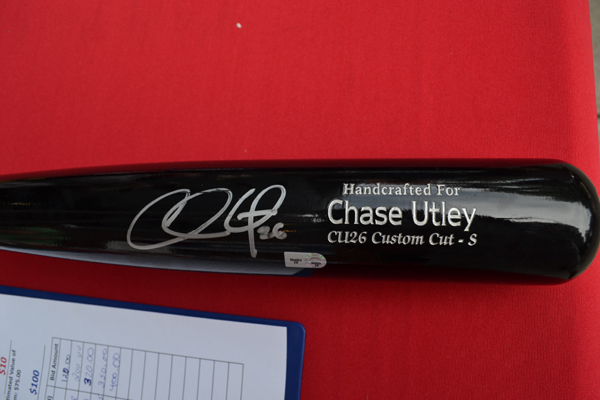 … and then, in need of some refreshment, I hit the Philadelphia Water Ice concession stand for some frozen lemonade:

The menu included a cherry and lemon swirl flavor, which I thought looked good — but when I ordered it, the cheery fella behind the cash literally grunted, “Out.” If you imagine the noise a hippo would make after you threw a rock at it, that’s the noise he gave me. I’m sure it will come as a surprise to you that his tip jar was empty.

I spent the remainder of the game, which Chicago won 4-3 (in extra innings, no less), walking around Citizens Bank Park, checking out the sights and taking a pile of photos. I love the openness of this park — from virtually every location, you can see the surrounding area, which I think is great. It’s a crummy feeling to be in a bowl-style park without any idea of what the area around you looks like. That’s certainly not the case at CBP. I talked about the ballpark’s close proximity to Lincoln Financial Field and the Wells Fargo Center in yesterday’s post, but check out this panorama that captures the scene:

And here’s a cool-looking shot that shows several of CBP’s parking lots, as well as the downtown skyline beyond:

Unlike yesterday’s long, awesome day at the ballpark, this visit seemed to fly by, despite the game going into extra innings. Before long, I was back in my car making the short drive to my hotel for the weekend, the Hyatt Place Philadelphia/King of Prussia. If you read my most-recent post, you’ll remember how impressed I was about this hotel upon checking in — everything from the friendly, professional front-desk staff to my huge room to the cupcake and welcome note waiting for me. After a great day at the ballpark, I was looking forward to chilling in my room for the evening. Before I kicked off my shoes and relaxed, though, I drove about four miles to an Outback steakhouse for dinner — something that’s become a bit of a tradition on my baseball road trips.

Whether you enjoy Outback or not, staying at the Hyatt Place Philadelphia/King of Prussia gives you a ton of eating and shopping options for your downtime. The hotel is virtually within sight of the enormous King of Prussia mall, which is the largest mall in the country, apparently. As such, you’ve got dozens upon dozens of nearby restaurants to consider. And if you’re the shopping type, the mall has more than 400 stores.

A bunch more features about the hotel are worth considering when you’re planning to visit Philadelphia. It’s got free Wi-Fi, complimentary breakfast, a 24-hour gym and a variety of sandwiches, salads and other quick bites to eat for sale just off the lobby — one of my favorite features of Hyatt Place hotels. And the guest rooms are enormous. I’ve used this analogy before, but this room was significantly bigger than my first apartment.

Here’s a look at the outside of the hotel: 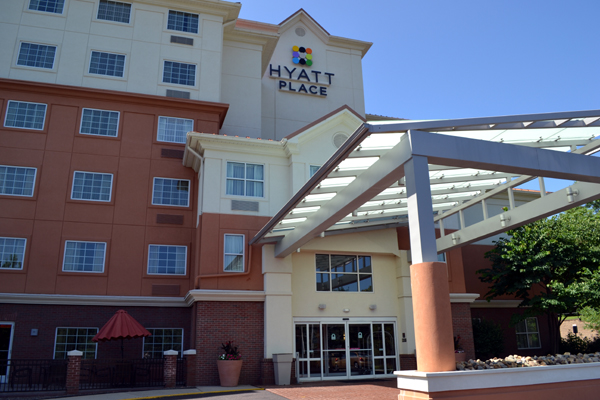 And here’s the bathroom, which I’ll explain below: 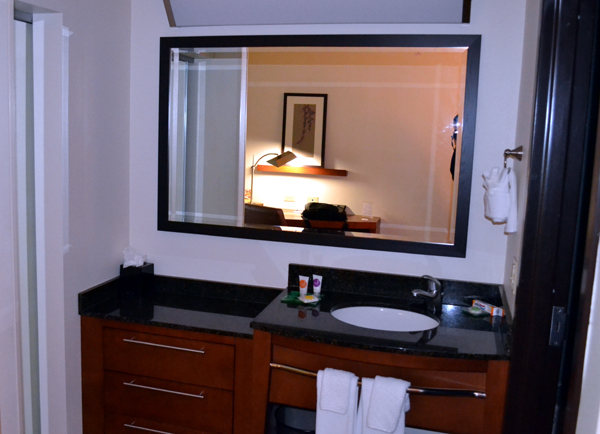 You know how some hotels have small bathrooms that make getting ready in the morning a pain? At this hotel (and the last Hyatt Place I visited), the “bathroom” isn’t its own room — it’s an open area outside the actual bathroom, which is really convenient. Lots of light, a huge mirror and more counter space than you’d ever need.

Finally, here’s the sectional couch in my room — perfect for lounging after the game and watching Baseball Tonight:

Despite three extra-innings games, my visit to the City of Brotherly Love flew by and although my road trip was quickly coming to an end, I had one more awesome ballpark and game to check out.