A genuine perk to visiting city after city as I travel around for The Ballpark Guide is getting to see so many new locations. While my visits to most cities consist of arriving, checking into my hotel, blogging, going to the game, blogging some more, sleeping and then departing, I’m occasionally able to do some exploring when my schedule allows it.

If you’re a longtime follower of this blog, you might remember some baseball-themed explorations such as the Cincinnati Reds Hall of Fame and Museum, the Little League World Series complex and checking out a bunch of NCAA baseball facilities. Non-baseball touristy things I’ve done include war ships, Super Bowl rings and choppers back in 2012.

This May, I visited Louisville to watch the Bats host the Pawtucket Red Sox at Louisville Slugger Field, and was lucky enough to have time to explore the city. As a huge boxing fan, the first stop on my agenda was the Muhammad Ali Center, a six-story museum dedicated to The Greatest. But since you’re probably reading this because you’re a baseball fan, I’ll share details about another exciting stop — the Louisville Slugger Museum & Factory, which is just a mile from the ballpark.

If you’ve heard of the museum, you’ve likely seen a picture of the 68,000-pound bat, which definitely catches your eye as you approach: 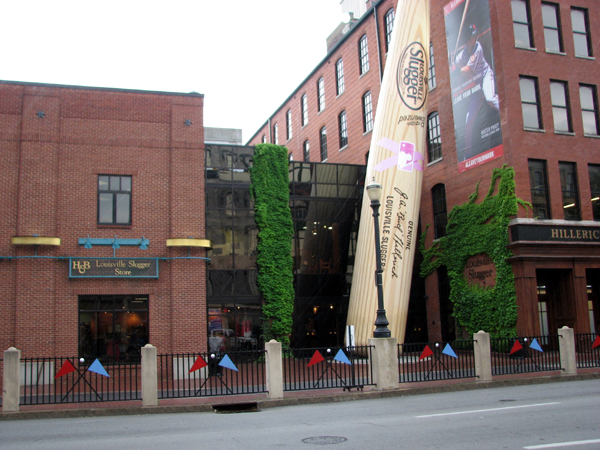 Like my sensational visit to the Sam Bat factory in 2012, I got the opportunity to take a tour and see how bats are made. Unfortunately, however, Louisville Slugger doesn’t allow photographs in the factory, so you’ll have to settle for this semi-illicit photo that I took looking through the window from outside the building: 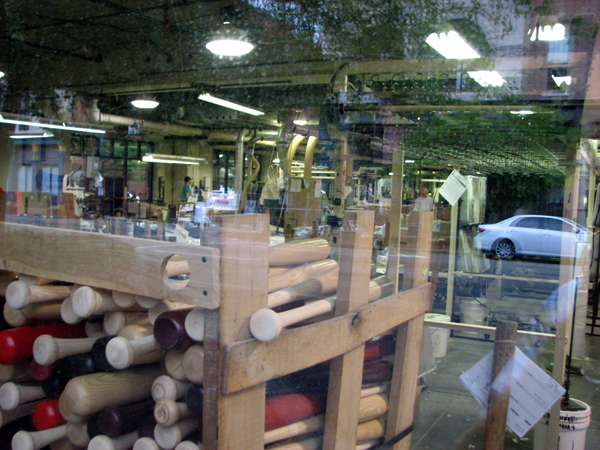 The tour was impressive. As the largest bat manufacturer in the world, it was fascinating to hear about how the various levels of bats are made. The Slugger bats you see for sale at Walmart? Let’s just say they aren’t made the same way — or from the same wood — as those custom ordered by today’s MLB stars. On our tour, we watched scores of bats being made for retailers and a smaller number being made to ship to MLB teams. We also heard funny anecdotes about past MLB greats who used the company’s bats. In today’s era of lucrative endorsement deals, you’d probably be amused to hear Ted Williams signed with Louisville Slugger for a set of golf clubs.

While I can’t share images from the factory tour, I do have a bunch of shots from the museum portion of my visit, which was equally impressive. First, though, I stopped in the huge gift shop and bought a T-shirt, a magnet and got an actual bat engraved with my brother’s name for his birthday. Here’s a look at part of the shop: 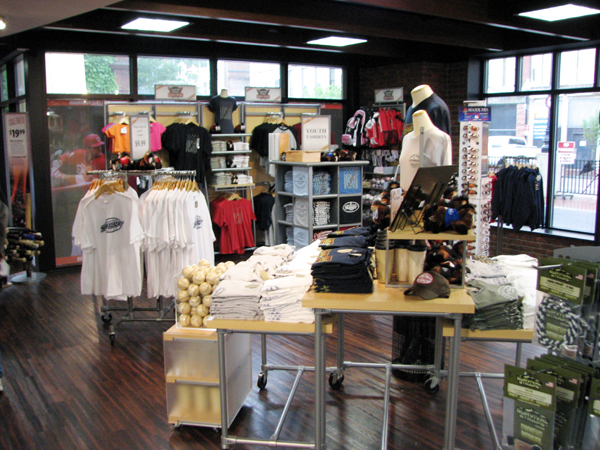 Outside the shop is something you can stare at for a long time — it’s called The Signature Wall, and is made of wooden blocks featuring the name and signature of most of the MLB players who’ve signed contracts with Louisville Slugger. There’s also a Hall of Fame section, which notes that more than 80 percent of HOFers were under contract with the company. Here’s just a small snippet of The Signature Wall … 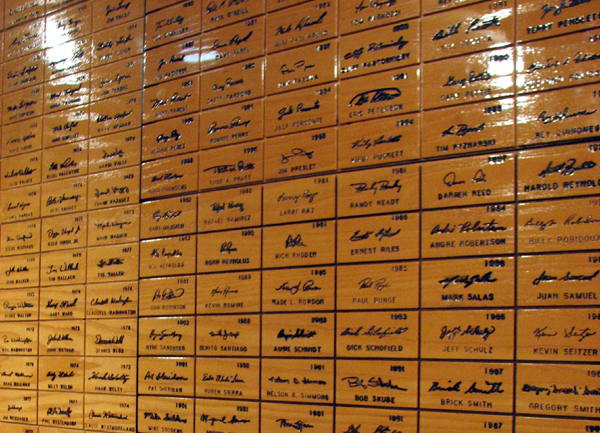 … and a close-up of the HOF section, with some names you’ll likely recognize: 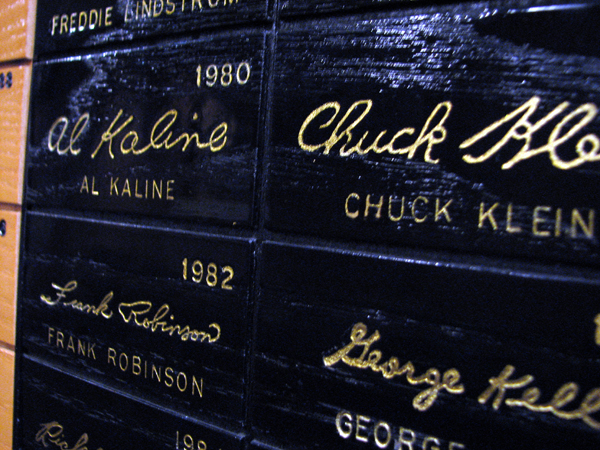 The museum itself had a wealth of displays, mannequins and, of course, bats: 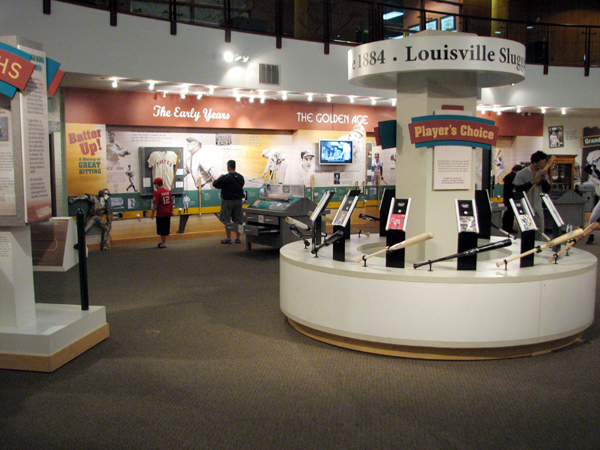 There were life-size displays of notable Louisville Slugger stars, including Ken Griffey, Jr.: 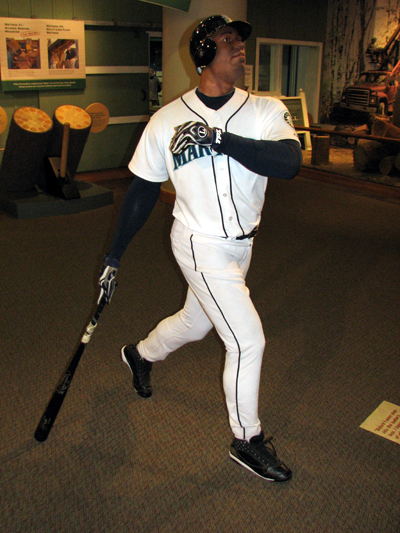 And Derek Jeter, whose face was repeatedly bashed by a kid with a replica bat just before I took this photo: 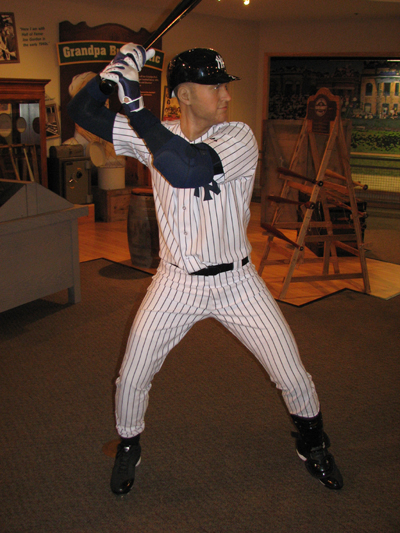 After spending an hour or so perusing all the displays, I relaxed for a minute in the dugout area: 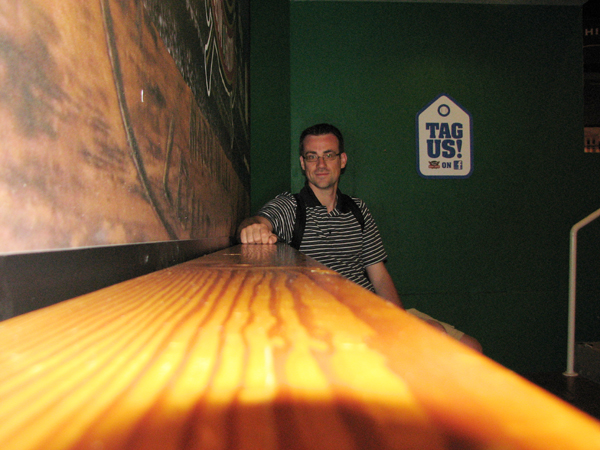 (I don’t think I looked like a deer in the headlights the entire time.)

Before leaving, I checked out the coolest part of the museum — one that gave me the opportunity to actually hold a game-used bat from one of the biggest stars in MLB history. Visitors had to don a pair of batting gloves, but were then able to pick up and swing a bat belonging to one of the following players: Carlton Fisk, Mickey Mantle, Cal Ripken, Jr., David Ortiz, Derek Jeter or Joey Votto. It was an easy choice for me to pick Mantle’s bat: 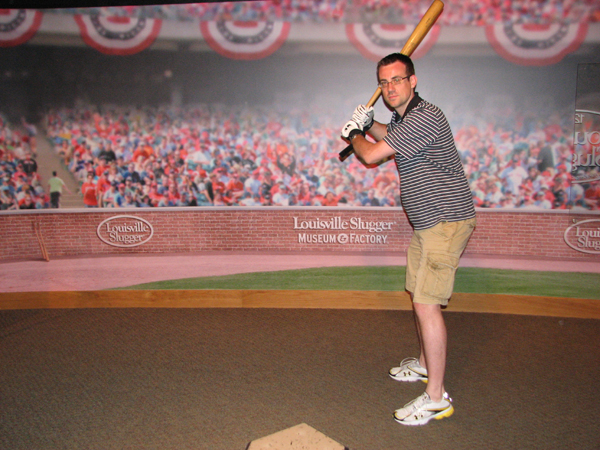 Whose bat would you pick? Let me know in the comments below.

And while you’re commenting, let me know how you’re getting through the baseball off-season. I’m taking advantage of the downtime to add more ballparks to my website. I’ve got about 20 more guides to complete before opening day. I’m also gearing up for some more off-season blog posts, including a few more recaps of my 2013 adventures, a look at some of the awesome game-used souvenirs I got, my third annual top 10 food list and plenty more.