I always like to book a two-day visit when I’m checking out MLB ballparks, so after getting the awesome chance to take in the Cleveland Indians #TribeLive experience on August 25, I made plans to stay in Cleveland and enjoy the game 24 hours later. That meant I had the day to myself in my outstanding hotel, which you’ll hear about more later in this post. The day flew past quickly and before long, it was time to load up the car and make the short drive north to Progressive Field.

It was a gray day that had rained on and off, so I was pretty sure that batting practice would be canceled. Despite this suspicion, I still got to the ballpark about an hour before the gates opened, which equated to three hours before first pitch. I parked at my usual parking garage a couple blocks away from Progressive Field and once I made it out of the garage and onto the sidewalk, here’s what I was looking at:

I never get tired of seeing this sight!

The Indians were giving away T-shirts for this game, but the crummy weather meant that the lineups were non-existent at the time of my arrival. This gave me time to once again walk around the park, but to also take the opportunity to enjoy a lap around the nearby Quicken Loans Arena:

Though not an NBA fan, it’s always interesting to see sports facilities, so I stuck my head in the team shop and enjoyed a reprieve from the humidity outside as I browsed through the myriad LeBron-related items. After spending maybe 15 minutes in the shop, I went back to Progressive Field, bought a ticket for the night’s game … 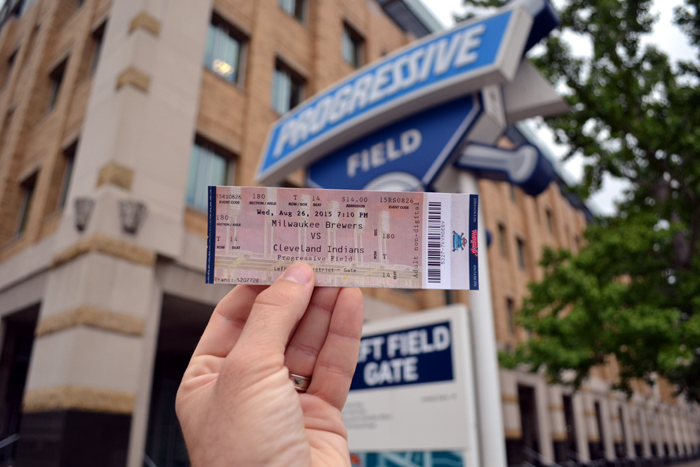 … and had a brainwave. Instead of standing at the gate for the next half hour or so waiting for it to open, I decided to enter the relatively quiet team shop through the street entrance and browse through everything. As you might’ve read in my last post, I always visit the memorabilia part of the shop, but this time I had a longer opportunity to take some photos to share with you. Here’s the knob of a Michael Bourn game-used bat:

Some bottled Progressive Field dirt, which I thought was really neat:

And the barrel of a Carlos Santana game-used bat:

After spending time in the team shop, I walked past the Indians player/staff parking lot to check out the cars. As you can see here, there wasn’t anything absolutely out of the ordinary, at least as far as I could tell:

At 5 p.m., the gates opened and I grabbed my free T-shirt and headed over to the visiting team’s bullpen, where longtime MLB starter Matt Garza was playing catch and then talking with pitching coach Rick Kranitz and bullpen catcher Marcus Hanel:

The new layout of the bullpens means that was the visiting team’s pitcher throws, you’re just a few feet away from him, which offers a great vantage point. I took another bunch of photos to form this panorama, which is similar to this one from yesterday’s post, only you’ll now see gray skies, a damp field and the tarp:

Before I left the area, I took a quick shot of myself with Heritage Park and the Progressive Field video board as a backdrop … 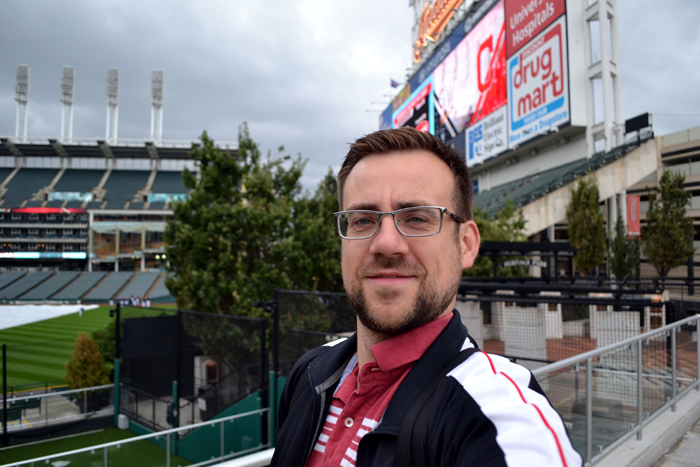 … and then took a short walk over to the new concession stands in the right field area. As you might’ve read in my previous post, there’s an extensive list of food choices available in this new area from a wide range of vendors. A day earlier, I’d eaten the “sounds-appealing-but-wasn’t-as-good-as-I’d-hoped” Parmageddon, a grilled cheese sandwich packed with a pierogie. On this day, I was hoping to find something a little more appetizing and this was the selection of choices awaiting my decision:

I browsed the concession stands and nothing immediately jumped out, so I decided to take a little climb and shoot this photo that shows The Corner and the surrounding area from above:

(The #TribeLive area, where I’d spent the previous day’s game, is the standing-room area adjacent to the right field foul pole.)

After enjoying the sights for a few minutes, I went back down to the main concourse and watched a few minutes of the Indians pregame show, on which Columbus Blue Jackets winger Brandon Saad was being interviewed and would later throw out the first pitch:

I watched the interview for a few minutes from just a few feet away and it was neat to be able to hear Saad tell his story about growing up in Ohio and playing sports. Once I’d enjoyed a bit of the conversation, it was time to complete my quest to find something delicious to eat. As I perused the available options you saw a few photos ago, one of the vendors cheerfully called out to me, “Hey, Mr. Photographer!”

I looked over and saw that he was standing at one of the gourmet hot dog concession stands that I’d seen earlier, so I walked over and said hello. “I’ll make you up some special,” he promised, so I figured I’d play along. I asked him which of the hot dogs was the best and he directed me toward “The Thomenator,” named for slugger Jim Thome. It was a foot-long dog with three pierogies, onions and sauerkraut. It sounded a little too similar to my sandwich yesterday, plus I can’t stand foot-long dogs. It’s a weird thing; I can happily eat four or five normal hot dogs in one sitting, but put a foot-long dog in front of me and I have no interest. Anyway, I asked about his second-best recommendation and he suggested one with a name that escapes me but that sounded interesting:

In any case, I ordered this one and totally bought into the seller’s enthusiasm about a strawberry milkshake and bought one of those, too. Here’s what the meal looked like:

The hot dog’s ingredients were good — lots of bacon and some nice heat from the peppers without being ridiculously hot. The pretzel bun, however, was a letdown. Every time I have one of these buns I vow I won’t make the same mistake again. Anyone with me here? They’re so dense and hard that they just taste like a stale bun. Let me know what you think in the comments. Do you agree? Disagree? As for the strawberry milkshake, it was the worst thing I’ve had to drink at a ballpark. It tasted of neither strawberry nor milk, but I suppose “Sweet Goo” is probably a poor name to market. I’m sad to say that it went the way of the dodo bird after just a couple saccharine sips.

It takes more than an unpleasant milkshake to deter my day, so when I finished dinner, I headed to the Family Deck section above right field, which I hadn’t explored a day earlier. In fact, I don’t recall ever being up in this section, for some reason — and it was awesome! The view was perfect …

… and the entire section had a small, intimate feel that was appealing. There were a ton of attractions and games for kids and the overhang provided some dry seats, which was nice. I hung out and rested my legs for a little while and then went over to the bleachers where I shot this picture that shows the Family Deck where I’d previously been:

The Family Deck is the section directly above the concourse and, as you can see from the photo, there’s lots of open space behind the seats. As I sat on the top row of the bleachers and took in all the wonderful sights, I started thinking about the game’s starting lineups. A day earlier in the #TribeLive section, we were joking how we didn’t know that many names on the Brewers for whatever reason. With that thought in my mind, I noticed this name on the ribbon board …

… and briefly thought, “Nelson Bosoto. That’s a weird last name and I’ve never heard of that guy. And it’s weird how they’ve used a different font for his last name.”

I quickly realized, of course, that the pitcher is Jimmy Nelson and that the “Bosoto” is actually his empty pitch tracker — zero balls, zero strikes and zero total pitches. But, hey, if you can’t laugh at yourself, who are you going to laugh at, right?

Soon after taking this photo, I knew that Nelson would be heading to the bullpen to get warmed up, so I went that way, too. My plan was to grab a close vantage spot along the railing, just as I had done earlier when Garza was throwing, and shoot some photos. The plan worked and I was able to get a dozen or so photos like this one:

As first pitch approached, I decided to go back to the Family Deck area that I’d enjoyed a little earlier. As you can see in this panorama, it was a dreary night but the view from up here was fantastic:

After a couple innings, I wanted to make a last visit to the team shop. One of the perks of the #TribeLive experience is that each visitor gets a $4 coupon to use virtually anywhere in Progressive Field, from the concession stands to the team shop. I had two coupons because each #TribeLive guest gets one, and since I didn’t need to eat more, I wanted to find something inexpensive to buy at the shop. I settled on an Oyo figure of Michael Bourn because, hey, I guess I’m eight years old at heart:

I spent the rest of the game sitting in the Family Deck and it was a perfect way to end my two Progressive Field visits.

My stay in Cleveland wasn’t done just yet, though. Once again, I was staying at the Hyatt Place Cleveland/Independence and it continued to be perfect. Here’s what the hotel looked like after I made the short drive back from Progressive Field:

Every time I visit a Hyatt Place, I’m struck by the size of the rooms. I lived in tiny dorms and apartments when I was in university that were a fraction of the space offered by this hotel. In yesterday’s post, you saw photos of the living room and bedroom area. Here’s the desk and kitchen space:

And an enormous open area beside the bathroom, which is basically the view you have while lying on he bed:

Another super-cool feature? The TV swivels so that you can watch it comfortable from the couch or the bed.

I’ve often said that while the opportunity to enjoy different ballparks on my baseball road trips is awesome, I’m also a big fan of having some downtime to relax in a nice hotel, and the Hyatt Place Cleveland/Independence definitely delivered on that front. Whether it was chilling on the couch and watching some Little League World Series games, burning off some ballpark food calories in the indoor pool or grabbing a salad from the nearby Panera, a steak dinner at the nearby Outback or some snacks at the supermarket just a few minutes away, (I did all of these, for the record!) my stay at this hotel was perfect.

But don’t just take my word for it — earlier this year, the Hyatt Place Cleveland/Independence was awarded its fifth TripAdvisor certificate of excellence, earning a spot in the TripAdvisor hall of fame. Whether you’re visiting Cleveland to take in a ballgame or have other plans in the city, you’ll be pleased if you make this hotel your home base.

Next up, some independent league action in Washington, PA!