Spending two days in the same city is always a blast, so after a great first day in Pittsburgh, I was excited to rise early on August 30 and get my second day underway. The Pirates were once again hosting the Rockies at PNC Park, but unlike a day before, the game was an afternoon game. This is the best possible scenario for baseball road trippers — you get to experience the park both at night and during the afternoon on subsequent days.

I took a look out my hotel window as soon as I got up and saw that the weather looked perfect over downtown Pittsburgh, which was a good way to start my day:

So, I packed up quickly and headed out in search of adventure. As usual, I wanted to get into the ballpark as soon as the gates opened, but being up early meant that I had a good chance to explore some of the sights around the ballpark, including Point State Park, which is the spot where the Allegheny, Ohio and Monongahela rivers meet. It’s also the place with the giant fountain that you often see on TV broadcasts when you’re watching the Pirates. For a quiet Sunday morning, there was lots to check out at this tourist-friendly park, and I’ll be sharing some photos and anecdotes in an upcoming off-season blog post.

For now, though, I’ll share this shot of PNC Park taken from the Three Rivers Heritage Trail, which I walked along to Point State Park:

And here’s a shot of me on the trail with the ballpark in the background: 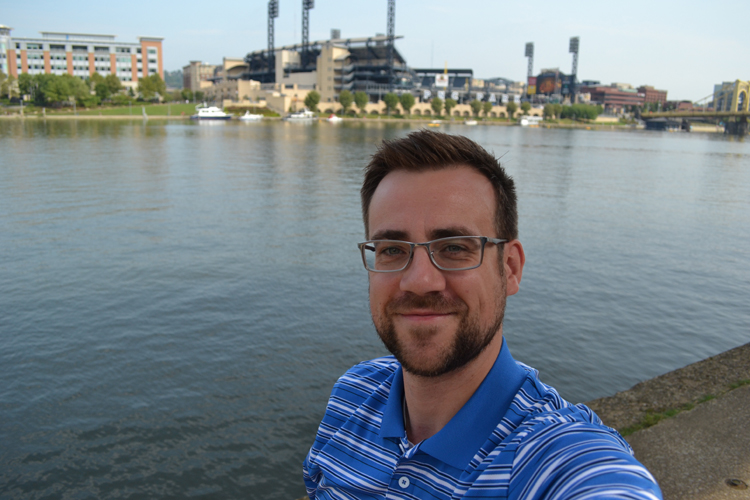 I spent a couple hours playing tourist before retracing my steps, crossing the Roberto Clemente Bridge and getting in line to enter PNC Park. As soon as I got inside, I went straight down to field level on the Rockies side where I planned to get an autograph or two. As I waited, I watched pitcher Yohan Flande do some jogging back and forth. I positioned myself directly in front of him and shot a bunch of photos, including this one:

It was sort of a funny moment — I shot photos for several minutes, and he silently ran toward me, then away from me, and then back toward me. He never acknowledged me with a nod or anything — not that you’d expect him to — but did sort of quizzically look at me a few times. I wonder if he was questioning why the heck I was standing there shooting photo after photo.

After Flande left, I gathered with some other fans to watch the soon-to-be-retired A.J. Burnett chatting with three members of the Rockies and teammate Jeff Locke:

It was cool to see Locke in person in the major leagues; I previously saw him pitch with the Double-A Altoona Curve way back in June of 2011 while visiting the Harrisburg Senators. You can see a photo of him from that day here.

Soon enough, Colorado reliever Christian Friedrich approached where I was standing and began signing autographs. He was a first-round pick in 2008, taken three spots ahead of 2015 MLB all-star Gerrit Cole. I normally don’t like getting autographs on tickets, but I didn’t have anything else handy, so I handed him my ticket from yesterday’s game and got it signed: 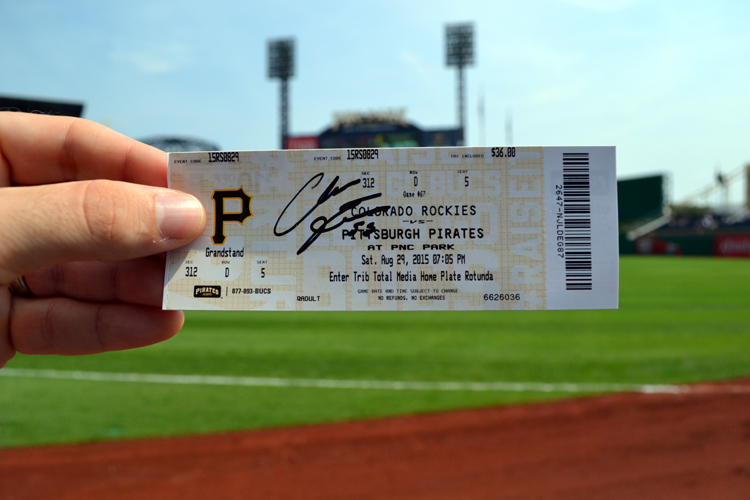 After I’d received the autographed and tucked it safely away in my backpack, I shot this panorama from field level:

If you look carefully, you can actually see Friedrich signing on the far left.

Before leaving the area in search of something to eat that would technically play the role of my breakfast, I took a shot of the out-of-town scoreboard: 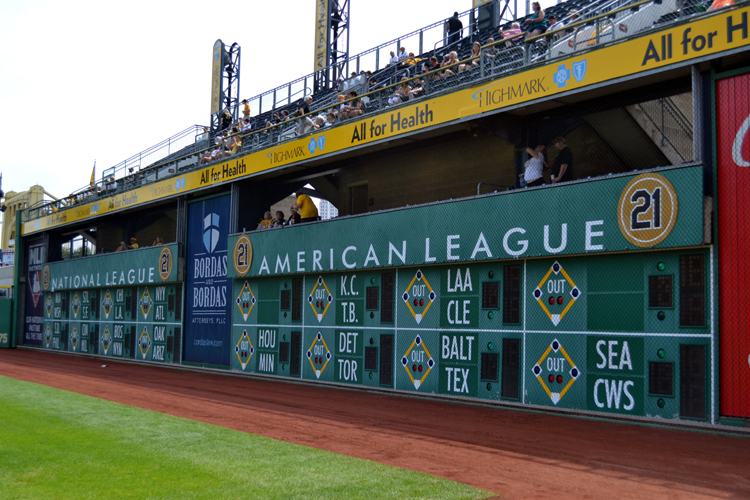 While the scoreboard itself is cool, take a look at the area directly above where it says “National League” and “American League.” This is the viewing area that I mentioned in my previous post and also referenced when I wrote about visiting PNC Park last season. It’s a great spot to enjoy the game and while the first row is reserved for wheelchairs, you can often enjoy an inning or two standing against the concrete wall. If you plan on visiting PNC Park, make it a priority to watch some of the game from this spot if you can.

My quest for some food led me to the Quaker Steak & Lube concession stand near Section 110. I often eat at the QS&L stand at Rogers Centre in Toronto and had some delicious onion rings at the PNC Park location during my visit last August.

Amusingly enough, those onion rings served as my breakfast during that 2014 Sunday matinee game. Now, almost exactly a year to the day later, I was standing in line to buy chicken wings that was serve as breakfast. Apparently, my eating habits have not improved.

As for the wings, they weren’t Quaker Steak & Lube’s best effort. In fact, I’d say they were the worst QS&L wings I’ve eaten at a ballpark. Dry, not flavorable and only slightly above room temperature are three drawbacks to chicken wings in my book. Nevertheless, here they are:

As you might’ve noticed from the background of the chicken wings picture, I’d eaten in the upper deck on the first base side. Once I finished eating, I realized that I could see my hotel, the Hampton Inn & Suites Pittsburgh-Downtown, from where I sat — which makes sense, I suppose, given that I could see PNC Park from my hotel room! Here’s a shot that shows the hotel and a bunch of Pittsburgh’s iconic bridges:

As first pitch approached, I went off in search of some more food, given that the chicken wings didn’t really satisfy. My quest took me down to the Riverwalk area and, in particular, the Rita’s Italian Ice concession stand. I’m a big fan of this sort of icy frozen treat, and I ordered the black cherry flavor:

I’m pleased to report it was delicious and included several actual black cherry chunks; I’m slightly embarrassed to report that this sugar-laden snack was technically part of my breakfast.

Part of my priority for this visit was to watch the game from various vantage points that I hadn’t visited a day earlier. As I walked toward a cool area you’ll see in just a minute, I stopped to take this shot of the Roberto Clemente statue and the area around it:

The statue is directly outside the gates, as you can see, but I think this photo does a good job of showing just how close the Clemente Bridge is to the park’s gates. As you can see, the bridge and the gates are just a few steps apart.

(Also, there appears to be a real-life pirate at the bottom of the photo.)

After taking this shot, I cut through the air conditioned Hall of Fame Club, which is located behind the left field seats. This area is impressive — it’s an upscale eatery with a view of the field and an extensive bar and menu, but it’s also open to anyone with a ticket. Whereas some upscale spots in MLB parks aren’t accessible, this one is definitely fun for everyone to check out. Directly outside the Hall of Fame Club sits a standing-room area, which is where I stood to watch the game’s opening innings with this view:

You don’t get the downtown Pittsburgh skyline from this spot, but I think you’ll agree that the view is outstanding.

I next watched some of the game from this spot on the third base side of home plate:

The overhang limits your full view of the city’s skyline, but it’s easy enough to see if you simply duck a little. After a couple more innings in this spot, I watched a little from the Riverwalk and then set off for another few laps around beautiful PNC Park to take in the sights. Many of the shots I took during my walk were similar to those I showed in my last blog post, so I won’t duplicate them here.

When the game wrapped up, I made the short walk back to the Hampton Inn & Suites Pittsburgh-Downtown: 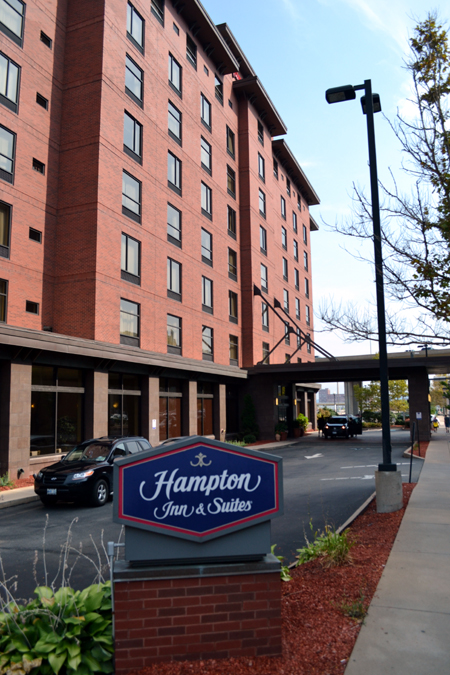 As you might have read in my previous post, this hotel is awesome for baseball fans visiting Pittsburgh. Its close proximity to PNC Park means you can comfortably walk to and from the game and won’t have to fuss over parking. There are a number of key tourist attractions, including those that I visited before the game, within an easy walk from the hotel.

The rooms are awesomely spacious, too — here’s a shot of just part of my suite: 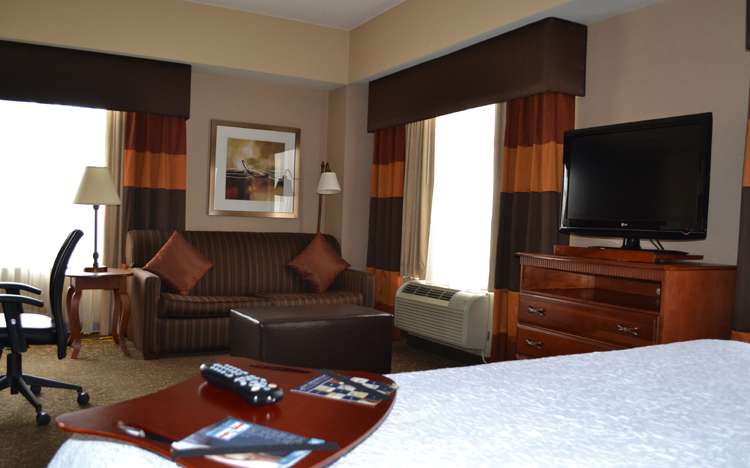 I’m not sure when I’ll be back in Pittsburgh, but I do know that when it comes time to book my hotel room, I won’t hesitate to contact the Hampton Inn for a third time.

Next up, I’ll have a bunch of posts about my outstanding trip to Texas!