What’s the earliest you’ve ever set your alarm clock?

For me, it was 12:30 a.m. on September 19. After I’d slept for about four hours, the beeping of my alarm signaled the start of a long day of travel that would take me from Ontario to Detroit and, ultimately, Dallas/Fort Worth.

When I booked my flight to Texas several weeks earlier, I decided that it made sense to fly out of Toronto, despite the fact that I live between four and 4.5 hours away. Using Toronto for my departure meant that I could get a shorter flight to Dallas, although I’d be stopping for a quick layover in Detroit. Since I wanted to get to Dallas early enough to check into my hotel in the suburb of Arlington and get ready for the night’s Texas Rangers game at Globe Life Park, it meant leaving Toronto’s Pearson International Airport in the morning.

My flight was scheduled for 10:16 a.m., so I figured it would make sense to drive to Toronto the night before, grab a hotel near the airport and then catch an early-morning shuttle over to my terminal. Of course, being frugal, I bristled at the idea of paying for a hotel room that I’d sleep in for just a few hours — hence my decision to sleep in my own bed, get up at 12:30 a.m. and drive through the night to Toronto. I pulled out of my driveway less than half an hour after waking up and, thanks to a shortage of traffic along the route, parked my car at Pearson about 5:30 a.m. — much earlier than necessary, granted, but I couldn’t risk cutting it too close because of a flat tire or another unforeseen event along the way.

Despite being a relatively unseasoned air traveler, I found my terminal — thanks to some obsessive map checking ahead of time — and was soon standing in the security checkpoint line with several dozen other bleary-eyed travelers. When I reached the customs counter, I was blown away at how quickly the process went compared to driving through customs. The conversation literally was:

Me: Dallas, then Houston.

Me: Pleasure. I’m going to some baseball games.

CBP agent: Have a good trip.

On the many times I’ve passed through border checkpoints on my baseball road trips, I’ve been asked questions about which teams I’m seeing, which hotels I’m visiting, why I go to so many baseball games, whether I’m meeting anyone, whether I’m playing in any of the games (!), what food I’m carrying and a bunch more. Does anyone else find that airport customs is easier than road customs?

I normally blog about my baseball trip plans in advance, but for this trip I wanted the details to be a surprise. I’d shared that I’d be traveling but hadn’t told anyone the specific details, so I was obviously pretty pumped to finally get through security, find a seat and send out this tweet:

With a couple hours to kill before boarding my Delta flight, I wandered around Terminal 3, occasionally stopping to watch the planes and take photos of the early-morning scene on the tarmac:

Eventually, it was time to board the small jet that would take me to the Motor City and, soon enough, we were in the air and I was peering out my window at Toronto as it passed below: 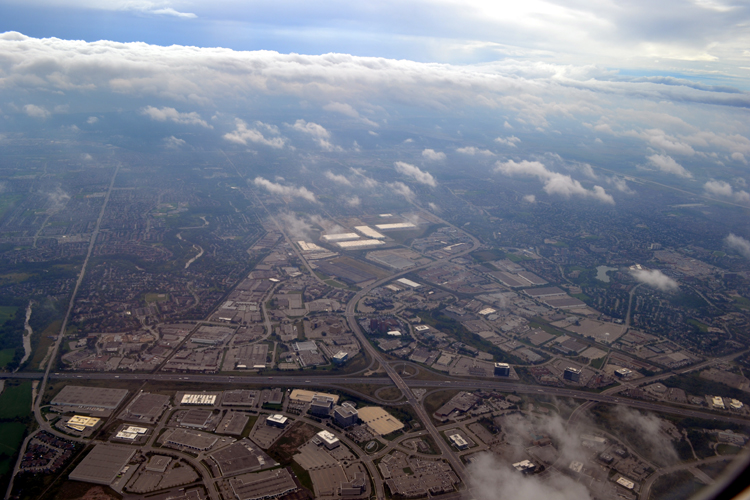 The flight to Detroit was scheduled for just over an hour and it was awful. Despite the clear skies in this photo …

… the trip was rife with enough turbulence that I had to really concentrate to avoid getting sick. What made me feel more nauseous, though, was seeing the Detroit arrival time of 11:25 a.m. come and go with us still in the air and yet to begin our descent. I knew that my 48-minute layover in Detroit wasn’t a lot of time to get to my next departure gate even if we were right on time, but arriving late was a major concern.

The flight attendant soon announced that because of poor weather, we’d taken something of a detour in the air and it had lengthened our flight. By the time we touched down in Detroit, it was 11 minutes before my flight to Dallas was scheduled to depart. I checked my departure gate and compared it with the arrival gate I was standing in, and had to actually chuckle. The two gates were comically almost as far away as they could be, as you’ll see below. The bottom red star is where we arrived and the top red star is where I had to get to:

Determined to give it my best effort, I set out with my backpack on my shoulders and my rolling carry-on bag dragging behind me to run through the airport like a cliched scene out of the movies. The distance between the two gates was more than a mile, and with several sets of stairs and crowds to navigate, I didn’t reach my departure gate until the plane to Dallas was set to leave.

But wait — the departure had been bumped back 10 minutes! I stood and peered through the terminal window to see my plane sitting there, just taunting me. Unfortunately, I also caught sight of a huge sign pointing out that the plane doors would be shut, by law, 20 minutes before the scheduled time of departure. I pleaded my case — somewhat loudly, one might argue — to the airline rep but rules are rules, and soon I was standing alone at the gate, feeling slightly embarrassed at how sweaty I was from my run as I watched my plane to Texas begin to taxi away.

I knew that because my missed flight wasn’t my doing, Delta would just put me on the next available flight, so I made my way to the customer service desk, told my sob story and waited for the agent to print my next boarding pass. He quickly got me booked on the next flight to Dallas, but my eyes bugged out of my head when I saw that it was scheduled to depart 7.5 hours later.

I’ll let that sink in for a minute.

That’s 450 minutes, for those keeping score.

This meant that when the Texas Rangers would be taking the field that evening, I’d still be sitting in Detroit. No game for me on this night, so I was sure glad I’d scheduled my trip to allow for two days in Dallas/Arlington.

The Delta agent apologized and handed me a voucher for free lunch at the airport, which was a nice consolation prize. I figured there wasn’t anything I could do but make the most of my long layover, so I wiped some more sweat off myself and began the prospect of hunting for lunch.

Fortunately, I was hugely impressed with Detroit Metropolitan Airport. It was loaded with enticing lunch options, and I found a LongHorn Steakhouse; if I wasn’t going to be eating dinner in Texas tonight, at least I’d have some red meat and look at a pair of bull horns mounted on the wall. I went with a half-pound burger loaded with bacon and blue cheese and a side of Caesar salad. No photo, unfortunately; I think I was still in a state of shock over my predicament.

I won’t give you a minute-by-minute account of the next seven hours spent at the airport. I will say, however, that I did walk just about every foot of the terminal and could probably draw you a map of everything with no effort. If the airport was closer to downtown, I’d have been tempted to hail a taxi and take a trip to Comerica Park, just to take some photos.

The coolest thing I saw at the airport was the famous Light Tunnel, which connects separate sections of the terminal. It feels like you’re entering a different dimension — the tunnel walls and roof light up in a variety of colors in time with music that’s pumped through the area. It’s unlike anything I’ve ever seen before and is difficult to explain. Sensing that I’d have trouble putting the sight into words, I used my GoPro to film a trip through the tunnel. Check it out — and crank up the volume to get the full effect:

While the Light Tunnel was great, and this fountain was also cool …

In between walks, I’d find a semi-quiet place to sit and listen to my iPod next to a charging station. I’d sit for a while, and then grab my suitcase and roll through the terminal from end to end for what usually felt like the 79th time. This was the pattern I repeated until, during one pass through the terminal, I noticed a set of escalators that I’d somehow missed before. Figuring I was embarking on some uncharted territory, I excitedly began the ride down but had a moment of panic when I saw the escalators ended straight in front of a pair of sliding glass doors — doors that opened into the non-secured part of the airport. When I reached the end, I quickly turned around to gauge the pedestrian traffic behind me, thinking I’d make a sprint back up my escalator. Clearly, a security guard who was watching me was reading my mind, and said, “It’s against the law to try to go back up. Try it and you’ll be arrested and fined.”

Dejected, I exited through the glass doors, explained my predicament at a customer service desk and was pointed in the direction of the security checkpoint. That’s right, I’d have to go through the entire security check process again!

Fortunately, the process went smoothly — and I even had the good fortune of having my hands swabbed for explosives — and 30 or 40 minutes later I was back in the secured part of the terminal pacing around as I had before.

About the same time as first pitch in the Rangers game, I was finally seated on my flight to Dallas and took my last photo of the day — a shot of the Detroit tarmac as the sun was setting:

The flight from Detroit to Dallas was much smoother and the view coming into Dallas at night was spectacular. I didn’t shoot any photos, as they’d hardly do the view justice, but I could see several landmarks I recognized, including the Bank of America Plaza, which is famous for its green outline at night.

It was between 10 and 11 p.m. when we touched down in Dallas — the times were starting to be a blur at this point — and the airport was absolutely dead except for the people off my flight and a janitor buffing the floor. It seemed like an “empty airport” movie cliche. In any case, I found a taxi quickly and arrived in my Arlington hotel sometime between 11 p.m. and midnight. By the time I went to bed, I’d been up for more than 24 hours and, staggeringly, also up for about 44 of the last 48 hours. That’s a stretch that’s tough to beat, right?

No time to fuss over being tired, though. In less than 12 hours, I’d be touring around Globe Life Park with a media pass provided by the Rangers.