I woke up early on the morning of June 21 thankful that I wasn’t rushing to hop into my car to head to another city for another ballgame. Even though hitting the road is always an awesome adventure, there’s a good feeling that comes with being in the same city for games on back-to-back days, and that was the plan for this short road trip. On my second day, I’d be hanging out in and around my hotel and anxiously awaiting that evening’s Scranton/Wilkes-Barre RailRiders game at PNC Field.

As you might have read about in my previous post, I’d attended a doubleheader at the International League ballpark a day earlier. I’d driven about six hours that day and went to the ballpark right after arriving in town, so I the schedule for June 21 was a little less busy.

The close proximity of my hotel, the Courtyard Scranton-Wilkes Barre, and PNC Field (about seven minutes between the two on foot) meant that I was planning to walk to the game again. In the meantime, I planned to take a short walk over to a big shopping complex just a few minutes away. Here’s a map screenshot of the area to show you where I was and what I was up to:

Other than get some exercise to burn off my ballpark food from the previous night, my late-morning walk had three objectives. The first was to walk to the observation point high above PNC Field, which I’ve marked with the red star. You can see the ballpark below it, as well as my hotel above and to the left. PNC Field has an enormous rock face beyond the outfield fence, which makes for one of my favorite backdrops in the minor leagues. You can drive — or, in my case, walk — to the top of the hill to find a great vantage point for looking down at the stadium. I’ve done this in the past, including one time that I was simply driving past Scranton and wanted to see PNC Field, but it was a neat feeling to walk there this time. Here’s a shot of me at the observation point with a pretty sweet background sight:

I didn’t photograph the next two priorities on my walk — visit Guitar Center, which is located in the Shoppes at Montage complex that you can see on the right side of the map image, and then stop at Panera Bread to buy a chicken Caesar salad to eat back at my hotel: 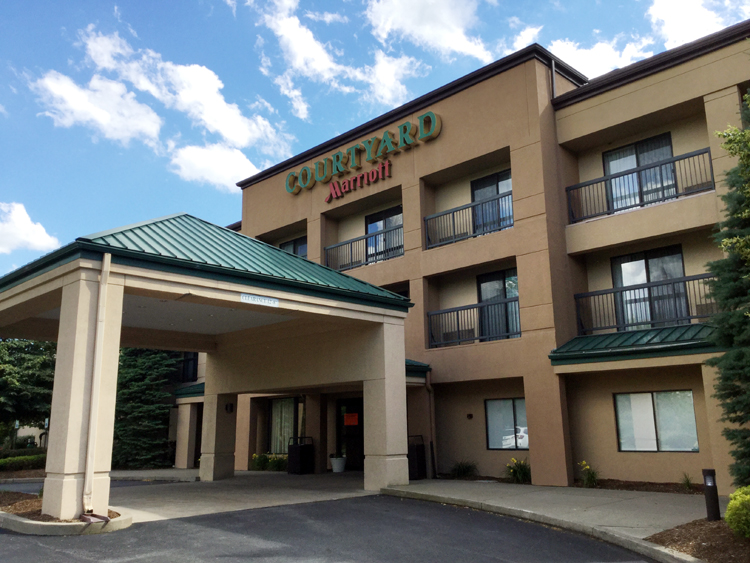 I was so appreciative of my hotel’s great location. As much as I enjoy driving, it’s always nice to be able to park the car for a few days and do everything on foot. I relaxed for the early afternoon, spending most of it on my laptop at this desk, with ESPN playing on the TV above me:

Occasionally, I’d step out onto my balcony at the Courtyard to enjoy the quiet scene surrounding me and to peek over the trees to see the PNC Field’s light posts. At about 3:30 p.m., I made the short walk down the hill and over to PNC Field, stopping when the ballpark came into sight to snap this shot:

These rails run right up to the edge of the parking lot, and they’re not merely a decoration to support the RailRiders theme. On select game days, fans can ride a trolley from downtown Scranton right up to PNC Field, which has to be one of the coolest ways to get to a baseball game.

What I wasn’t content about, however, was that sinister-looking cloud over the right side of the ballpark. It wasn’t something that I’d really noticed during my walk, but when I snapped the above panorama and looked at it on my camera, I was a little unnerved that it might linger and threaten batting practice. Fortunately, the dark cloud soon carried any threat of bad weather away with it, and the afternoon and evening were once again perfect for baseball.

When I walked into PNC Field a day earlier, the visiting Syracuse Chiefs were hitting. This time, I was early enough that BP had yet to begin. This meant that I had an opportunity to watch both teams warming up for a few minutes before the hitting began:

After watching some RailRiders play catch along the third base line, I went over to the walkway above the bullpen, just as I’d done a day before. There, I watched right-hander Brady Lail throwing a bullpen session: 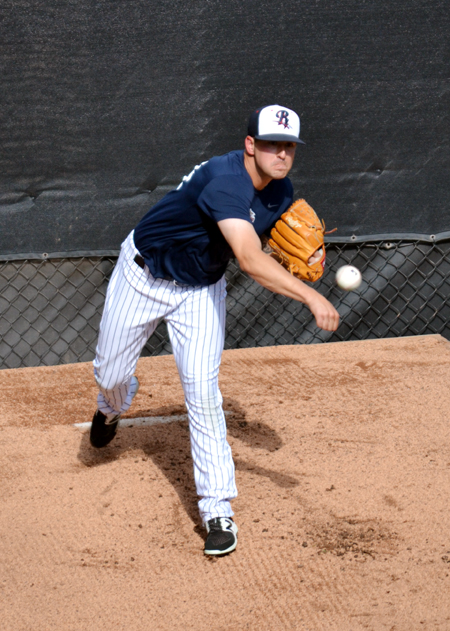 He’d started and won the game against Syracuse two days earlier, so he was simply getting some throwing in, rather than getting prepared to pitch that evening. As I watched the bullpen session, I noticed two unique things about the catcher working with Lail. Can you spot them in the photo below?

First, I thought it was interesting that he was kneeling down, rather than using a standard catcher’s crouch. Doing so obviously makes a lot of sense in the bullpen, and it’s far less detrimental to the knees, but I don’t know if I’ve ever noticed someone doing this in the past. Second, he’s not wearing the usual turf shoes that players commonly wear for warming up. Instead, he’s got on a pair of LeBron James basketball shoes. (For the record, I know absolutely nothing about basketball shoes — I simply zoomed in and saw the LJ logo on the soles.)

By now, the Chiefs BP session was in full swing, so I took a quick lap through the outfield and arrived above the visitor’s dugout on the first base side to watch the action. I stood in the front row at field level to enjoy not only the action in the cage, but also the infield drills that were going on right in front of me. One player I was keeping my eye on was Syracuse first baseman Clint Robinson, who has seen a bit of MLB action but has otherwise been a successful power hitter in the minors for a long time:

From where I stood, I also had a good view of the rock face beyond the outfield wall, and the observation point I’d stood upon earlier in the day. That area, which is partially obscured by the trees in the photo below, is essentially at the base of the building you see peeking above the trees:

This was pretty much how I spent batting practice from the time I arrived until the time it wrapped up — a few minutes at the bullpens, a few minutes at field level, a lap of the ballpark, and repeat. It was absolutely glorious.

Once the gates opened, I made another lap of the concourse to consider some food options that I’d scouted out earlier. As I mentioned in my previous post, the PNC Field concession menu is impressive — and I found that mentally shortlisting a few items and then thinking about them as I walked made it easier to choose a worthwhile candidate. As I cut through the grass berm, my eyes caught sight of a BP ball that had obviously been overlooked by the ushers and even by the fans who were in the park at this point.

It was an easy choice to grab it, but instead of my usual “hand-holding-ball” photo, I wanted to try something different. As you’ll see here, I set the ball up on the rail above the bullpens, and I’m really pleased with how the photo turned out: 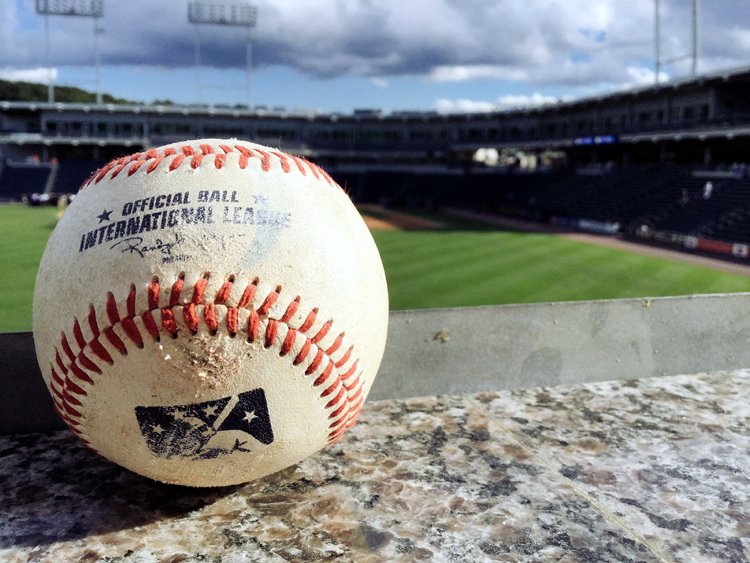 Although the ball sighting slowed my pre-dinner lap around the ballpark, it didn’t disrupt my plans on what to eat. I elected for the General Tao Perogies, as I’m a big fan of perogies and seldom see this dish at ballgames. I had grand visions of perogies topped with several of the standard General Tao ingredients, so I was a little underwhelmed when I was handed a container of perogies tossed in spicy sauce: 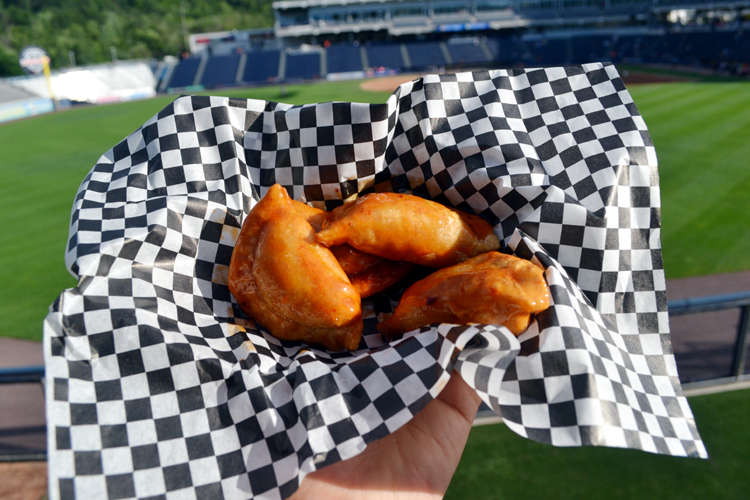 Fortunately, the meal was good — the perogies were cooked perfectly, meaning that they weren’t too soggy and they weren’t too crispy. The sauce was nice, too, providing a decent amount of sweetness and heat without blowing my head off. What really would’ve knocked this dish out of the park, though, would’ve been some fried chicken pieces, green onions and sesame seeds, like they independent Ottawa Champions do with their Tao Poutine.

After eating, I went over to the RailRiders bullpen to watch the action. By now, starter Domingo Acevedo was warming up in the team’s pinstriped uniform, which looks awesome and must remind players that they’re just a phone call away from suiting up for the Yankees. I snapped a bunch of shots of Acevedo’s delivery, and then checked how they turned out on my camera — and noticed an odd thing. Just as he released the ball, he opened his eyes extremely widely. Case in point:

I figured this might be an anomaly, but as I continued to take photos of the right-hander’s tosses, I noticed it each time. Just as he released the ball, he really opened his eyes. Slightly amused, I continued snapping shots — and noticed this facial expression each time. I took enough shots that I could make a coffee table book called “Eyes of Acevedo,” but I’ll hold off on that million dollar idea for now.

I spent the early innings of the game in a seat down the third base line. I was far enough from the dugout that the netting wasn’t in my way, and I still had a perfect view of the action:

I’d have liked to sit for a while on the other side of PNC Field, but the sun sets directly over the third base side, making it extremely bright for those toward the right field foul pole. Don’t get me wrong — this is a great spot later in the game or during afternoon games, but the sun is just a little too bright for my liking for 7:05 p.m. games.

My next stop was the grass berm for another inning of action. A day earlier, I’d spent some time on the berm in right field, but I elected for center field this time, where I had this great view:

Midway through the game, I went out to the plaza that’s between the two sets of gates on the home plate side of PNC Field. It’s a popular gathering spot with the team shop off to one side, and the abundance of glass used in its design gives it a cool, modern feel:

In about the sixth inning, I set off in search of something to eat again. The perogies were more of an appetizer, as there were just four of them in the order. I found additional sustenance in the form of a cheesesteak sandwich. This wasn’t any old cheesesteak, however. At PNC Field’s “Steak Me Out to the Ballgame” concession stand behind home plate, there was a long list of different cheesesteak variations. My order might seem sacrilegious to a true cheesesteak connoisseur in Philadelphia, but I got a buffalo-style cheesesteak — the usual cheesesteak ingredients, but topped with blue cheese dressing and hot sauce:

Verdict? It was tasty enough, but I’m afraid it didn’t hold up to the cheesesteaks I’ve eaten at Citizens Bank Park in Philly, although the unique toppings were a fun twist.

As dusk fell, I slipped out of PNC Field to take this shot …

… and then settled into a seat on the first base side to watch the remainder of the game at this great ballpark:

Less than 10 minutes after the game’s final out, I was back in my hotel room, where I repeated the agenda from the night before — a late-night swim, watching baseball highlights on TV, enjoying the balcony for a little bit and, finally, hitting the sack to close out a great two days with the Scranton/Wilkes-Barre RailRiders.