I pulled onto the campus of Hudson Valley Community College shortly after 3 p.m. on August 20, noticing small groups of first-year students and their parents checking out the school in advance of moving in. It wasn’t the campus that I was interested in seeing, though — my sights were focused on the building at the rear of the campus.

That’s where Joseph L. Bruno Stadium, home of the Tri-City ValleyCats, stands. It’s one of my favorite stops in the Short-Season A New York-Penn League, and a place that I visited way back in 2010 and again in 2012. If you’re thinking that another visit was overdue, I totally agree with you — and that’s why I had two ValleyCats games scheduled on this short road trip.

The ‘Cats were hosting the Brooklyn Cyclones, who were amusingly the team that I’d seen play Tri-City in each of my previous two visits, and by the time I got to the front gate of the ballpark affectionately known as “The Joe,” there was already a sizable crowd waiting to get in:

Although I was anxious to get inside, I also knew that I’d have more than enough time to enjoy the ballpark over the course of two days. So, I took a bit of time to make a lap of the park’s perimeter and check it out from a few angles.

Seeing the field for the first time, a peek through the chain-link fence atop the grass berm in the right field corner, instantly brought back fond memories of my two previous visits — a championship series game in September of 2010 and the first day of a road trip that took me through New England in 2012:

Given The Joe’s location on the HVCC campus, there are some cool sights to see around the ballpark — namely, a football stadium and a softball field, as well as a ropes course beyond the left field corner of the ballpark. But I was here to see the baseball field, and enjoyed looking through the trees that line the hill beyond the outfield fence to catch glimpses of it. Here’s a shot of the ballpark from the back side of the “hit it here” sign in right-center:

After a full circuit, I headed into The Joe through the main gates, which put me on the concourse directly behind home plate. As I often do, I snapped a photo of the field from this angle …

… and then walked down to field level to just enjoy the sights in front of me.

Fortunately, I’d be standing on the field before too long. The ValleyCats were hosting a “play catch on the field” promotion before the game, and even though I was traveling solo and didn’t have a catch partner, I took advantage of the opportunity to walk around the outfield, trying to dodge errant throws from the scores of kids playing catch. Here’s a panorama that I snapped from the left field corner a moment after nearly getting hit with a football, funny enough:

And here’s how the scene looked from straightaway center:

The drive from my home to Troy, New York (the Tri-City ValleyCats name represents the Tri-City area of Albany, Troy and Schenectady, the latter of which I impressively spelled correctly on my first attempt) took a little under five hours, and I didn’t make a stop for food. That meant that getting something to eat was pretty high up on my list of priorities. Last visit, I had an order of delicious salt potatoes, but I was looking to try something different this time. After a quick circuit of the concourse to evaluate the options, I was drawn to the pizza concession stand on the third base side. But this wasn’t any old ballpark pizza. Rather, this stand was serving made-to-order pizzas in a wood-burning oven:

I knew I had to try one. I ordered a pepperoni and cheese pizza, and hustled to a picnic table above left field once I had the hot box in my hands. I was impressed with the look of the pizza as soon as I lifted the lid, and even more impressed once I bit into the first slice. This pizza was absolutely delicious, and gets the nod as the best ballpark pizza I’ve ever eaten:

I finished the pizza about the time that the teams wrapped up their pregame warmups, so I walked back down the length of the concourse and grabbed a seat behind home plate for the first inning. Even though I had the netting to contend with, I had fun taking some action shots, like this one of ValleyCats starter Alex House:

And this one of Cyclones catcher Scott Manea picking up his first of two hits of the game:

Next, I took another couple laps around the concourse, enjoying the sights and keeping an eye on the action. The Joe is absolutely beautiful, but perhaps the lone knock on it is that the concourse doesn’t wrap around the entire field. Maybe it’s just a matter of personal preference, but I love parks that have this feature, as it’s enjoyable to take entire circuits of the field instead of have to walk back and forth from foul pole to foul pole. On my walk, I had to chuckle when I saw this banner: 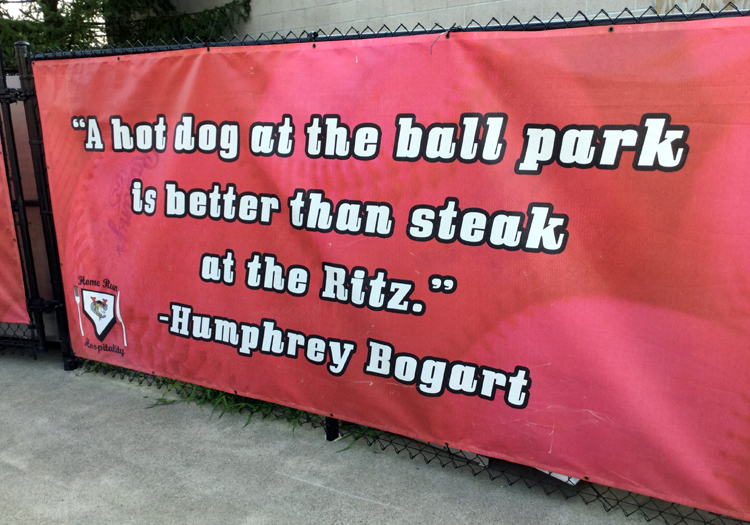 What do you think? Agree or disagree?

After I watched a ball that landed in the outfield roll under the gate beside the left field foul pole for a ground rule double, I wanted to spend some time in this area. I figured that not only could there be a chance of snagging a home run, but grabbing a ground rule double ball would make for an interesting story. I snapped this panorama of this pristine-looking ballpark on my walk to the left field corner …

… and then hung out for an inning and a half just a few steps away from the base of the foul pole. While there, I snapped this shot of myself — of course, I’m wearing one of my T-shirts: 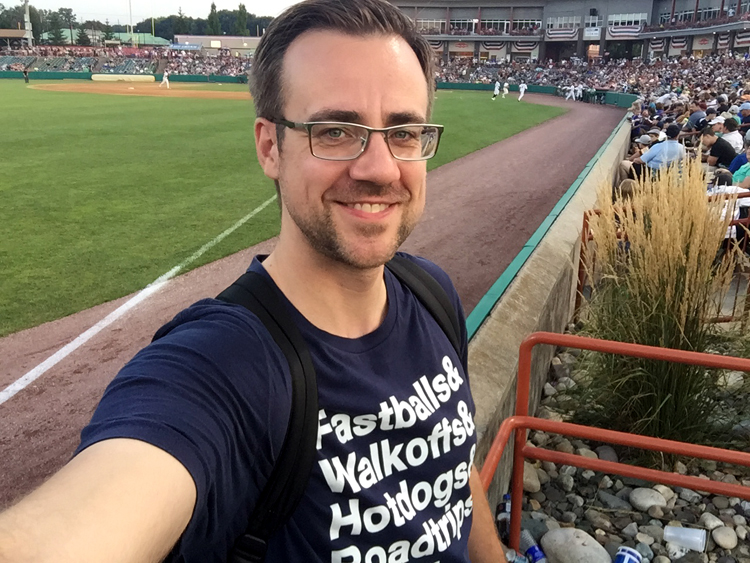 Interested in buying one for your own baseball road trips? Here’s the link.

No baseballs came my way, but that was all right. I was still having a blast, and especially excited that I had two days in Troy on this visit. Once I abandoned the idea of getting a baseball, I went behind the home bullpen for a few minutes:

One of the things that I love about the minor leagues is just how close you can get to the bullpens. While this is occasionally the case in the big leagues, there are also several MLB parks at which close access to the bullpen is impossible. It’s fun to watch the players hanging out, getting loose and, of course, warming up for action.

Speaking of the bullpen, there were a few interesting things that I noticed. We’ve probably all seen a player go to stand next to the plate to mimic the batter while a pitcher is warming up, right? Well, at The Joe, the ValleyCats had a pair of wooden batter-shaped models that could be used instead of actual players. I’ve seen some of these in the past, but they’re still fairly rare. You can see a couple of them below, “standing” next to the bench:

Even more interesting were a couple things that I hadn’t noticed at other parks. If you look carefully in the image above, you’ll see a series of strings that run across the bullpen. These represent the top and bottom edges of the strike zone for pitchers who are warming up. Has anyone else noticed these at other parks? I’m wondering if it’s something that’s exclusively done in the lower levels of the minors. Also, you’ll notice a large target that is laying against the fence. It’s divided into four quadrants with clock-style numbers around the perimeter. I’m guessing it’s a teaching tool and may even be something that pitchers use when practicing on their own. This is the first time that I can remember seeing such a thing.

The game itself was bonkers. Tri-City won 13-10 despite being outhit 17-11. Sounds like an offensive juggernaut, right? Yes, but the teams also combined for 20 strikeouts in a game that took 3:41 to play.

About 10 minutes after the final out, I was pulling into my hotel, the Hilton Garden Inn Troy:

I’ve stayed at Hilton Garden Inns many, many times over the years, and this hotel was easily among the most impressive I’ve visited. As with many hotel chains, HGIs have a lot of common features that are similar from property to property, so I was sort of expecting the standard king room that I usually get at this brand of hotel. I was shocked, however, to learn that the hotel had upgraded me to the presidential suite — something I didn’t expect or even imagine might be possible. I’ve since learned that when suites are available (the HGI Troy has 15 suites, including the presidential suite I was lucky to stay in) guests will sometimes get surprised with upgrades. So, if you book a room at this hotel when you’re traveling to Troy for some ValleyCats baseball, you never know which room you may end up in.

This suite was hands down the biggest hotel room I’ve ever stayed in, and featured a list of amenities that was hugely impressive. Standout features included a full kitchen and bar, living room with leather furniture and a fireplace, three TVs and a separate bedroom with a king bed at the end of the long hallway. There was even a full-sized dining room. Honestly, the photos of this suite fail to do it justice, but here’s a look at part of the scene in panorama format:

Yes, I used all three TVs during my visit.

And, yes, I put the fireplace on when I sat in the living room.

The full kitchen was another feature that I really appreciated: 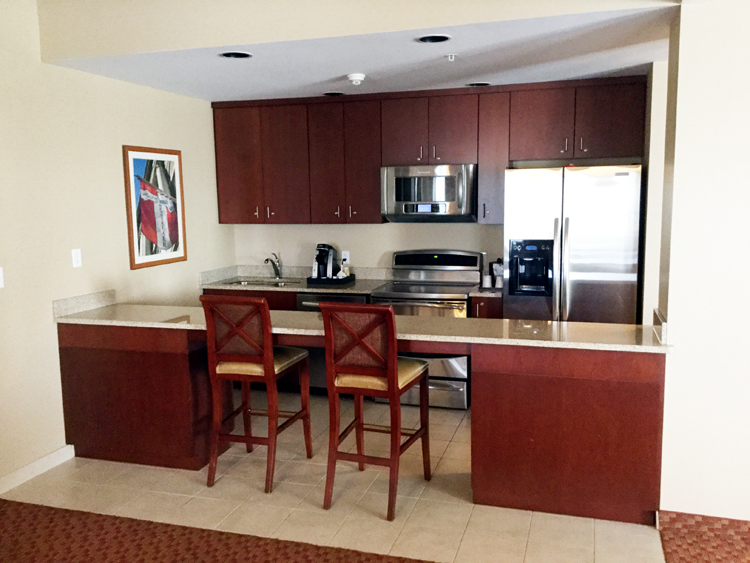 While simply having a bar fridge is usually enough for me, it was great to have a full-sized fridge and freezer so that I could stock up on some snacks and drinks for my two-day stay. And, hey, if a fella’s gonna eat some Häagen-Dazs out of the tub in bed while watching SportsCenter, the freezer means that he can ration it out instead of eat it all in one serving. Theoretically.

The location of the hotel was also perfect for me as a baseball traveler. Just a short and easy drive to The Joe, the hotel was an even shorter drive to grocery stores and walking distance to several fast-food restaurants.

My intention of going to bed in decent time was zapped when I got into bed, flipped on the TV and found that it had on-demand programming. As I tweeted out at the time, Showtime boxing captured my attention, and I watched a couple hours of fights before shutting off the lights, anxious for my second day in Troy to begin.