I didn’t set out to build a collection of baseballs.

It just sort of happened.

I like putting together various collections of things that bring me joy, and that happens to include baseballs.

But, like I said, it was never my intention to collect baseballs.

When I first started traveling for this blog back in 2010, the first ballpark that I attended was Frontier Field in Rochester. I had an outstanding time, and it didn’t involve getting a single baseball. Things changed a day later, however, when I visited Falcon Park in Auburn. I arrived well before the gates opened, so I spent some time wandering around the perimeter of the park and taking photos of it from different angles. During batting practice, I was on a grassy area behind the outfield fence when I heard a baseball thud to the ground a short distance from where I stood. I walked over, picked it up and looked at it. A moment later, another ball cleared the fence — so I went to pick it up, too. This continued for the next 30 or so minutes, and I’d gathered up 11 baseballs by the time BP ended.

Looking back, this was the pivotal moment that introduced me to baseball collecting. A gateway experience, if you will.

I wouldn’t categorize myself as rabid when it comes to trying to get baseballs, though. If I’m at a small ballpark, I’ll always walk behind the outfield fence before the game to see if there are any BP balls laying around, but the result won’t make or break my visit. When I enter a park, I’ll sometimes take a look through the outfield seats to see if there are any baseballs that the ushers missed, but I don’t do this every time. And if there’s a sparsely populated seating section that a foul ball might reach during the game, I’ll occasionally spend a bit of time there. When it comes to BP, I don’t tend to spend more than a few minutes actively trying to snag baseballs, though. I’d much rather explore the stadium, especially if I’m visiting for the first time.

All that said, I’ve managed to put together a decent-sized collection of baseballs over the years.

Even though I don’t necessarily go out of my way to acquire baseballs, I absolutely love when I get one. There’s no better souvenir in all of sports, as far as I’m concerned, and whether it’s a home run ball or a random, muddy ball that I found in a puddle outside of a minor league park, it makes me happy.

Every baseball in my collection has a story, but I want to highlight a handful of balls that I find particularly noteworthy.

First, though, some statistics.

My collection currently sits at 202 baseballs. Through the 2018 season, I’ve made 162 ballpark visits — which means that I’ve acquired 1.25 baseballs per visit.

(Last week, I posted a picture of my collection in its 58-quart bin and asked people to guess how many balls were pictured. Big kudos to Bill Adams on Facebook, who actually chose 202!)

Let’s start by breaking down how many balls from each league I’ve acquired, as well as looking at one random ball from each of those leagues so that you can see how they all look. 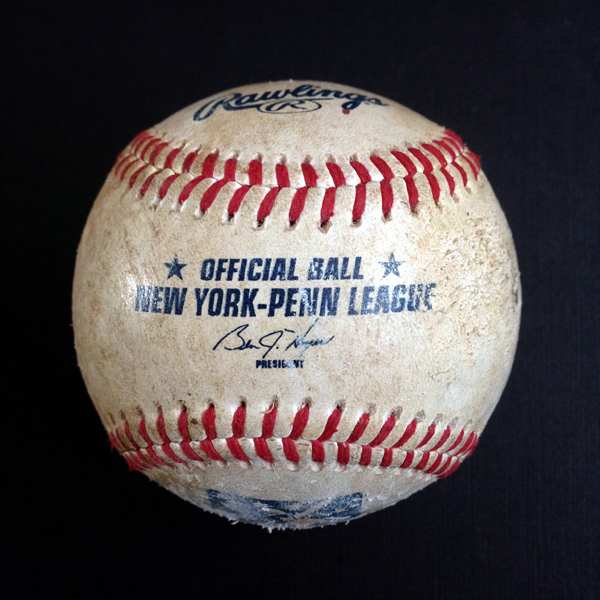 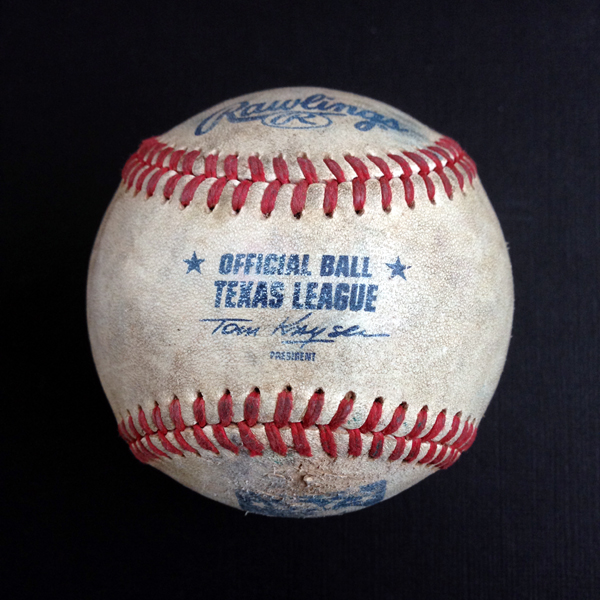 There are some interesting things of note here. While I have more MLB baseballs than anything else, I’ve snagged most of the 37 at minor league parks. MLB baseballs begin life as game balls, and when they’ve been scuffed up, they become batting practice balls in the big leagues. Eventually, if an MLB batting practice ball hangs around long enough, it gets sent to the minor leagues where it’ll presumably be used until it’s no longer usable. When you look at this photo of most of my MLB balls, it’s pretty clear by their condition which ones I got at MLB ballparks versus MiLB ballparks: 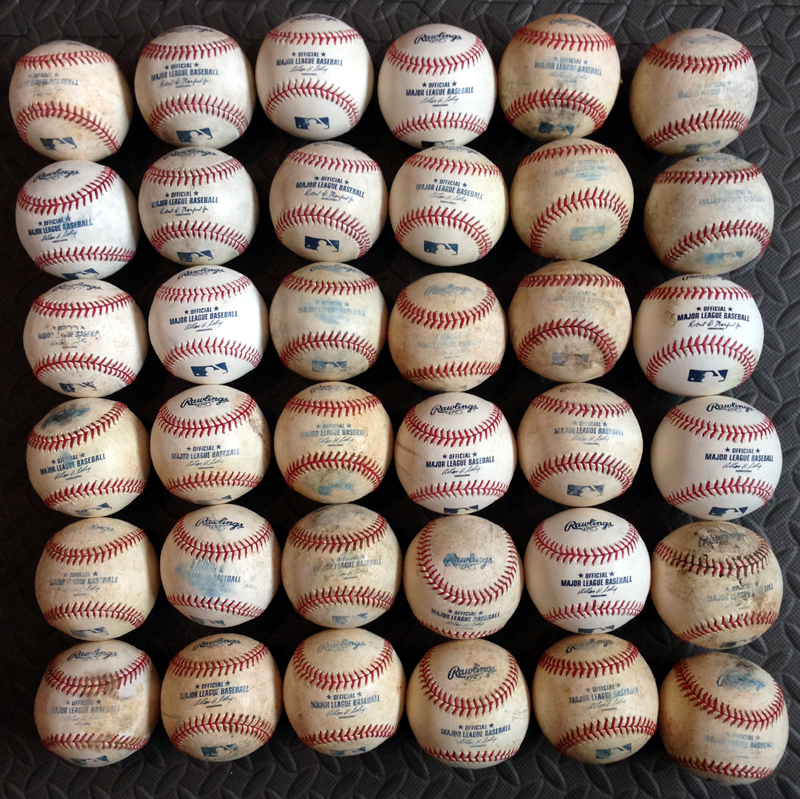 It makes sense that I’ve acquired more baseballs from the International League than from any other of the minor leagues, as I’ve been fortunate to visit 11 of the 14 IL ballparks. The same theory holds true for the Eastern League. That league has 12 ballparks, and I’ve been to 11 of them.

On the other end of the spectrum, I’m always amused when I see my lone Northwest League baseball. That’s because I’ve never even been close to attending a Northwest League game. I managed to find this ball at a Vermont Lake Monsters game, of all places — which, geographically, is about as far from the Northwest League as it gets.

There are a number of other balls in my collection that don’t fit into the above list. I have a total of three balls that are labeled as Minor League Baseball balls, rather than being specific to any one league. Does anyone know when these balls are used? Each minor league has its own official ball, so I’m unsure of what these balls are all about. Here’s one of them: 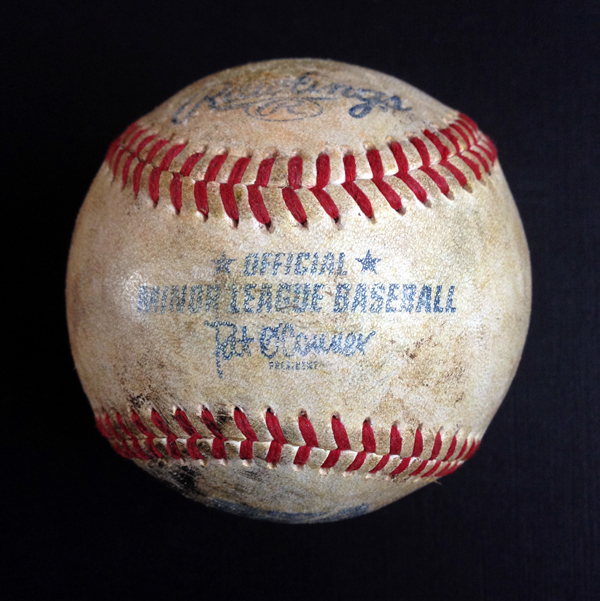 And I’ve got another four MiLB Practice Balls, which are fairly ugly. Here’s my best one:

I snagged that one back in 2011 when I was at G. Richard Pfitzner Stadium, home of the Carolina League’s Potomac Nationals. I love when baseballs tell a story, and this one definitely does. If you look at the following image …

… you’ll see a series of diagonal lines on the right side of the ball. I found this one in the aluminum bleachers, which have treads to provide grip for people climbing up them. It’s evident that the ball acquired these marks after it was hit into foul territory and skipped off the treads of the bleachers.

Speaking of the MiLB Practice Balls, here’s the worst-looking of my four:

It clearly did battle with a lawnmower and lost:

I’ve also managed to get a pair of NCAA baseballs, despite never attending an NCAA game. I found one of them outside of Lakewood’s FirstEnergy Park in 2012. That ballpark visit was a rainout, but this soggy ball was obviously left behind after the NCAA Mid-Atlantic Regional Tournament, which Lakewood had hosted a few days earlier:

… as well as one majorly scuffed baseball that isn’t stamped in any way. There’s also the generic Wilson ball that I found during BP at a Washington Wild Things (Frontier League) game in 2014:

Finally, there’s one ball that isn’t from one of the minor leagues. In fact, I can’t tell where it’s from. It’s very difficult to see, but there appears to be a diamond-shaped logo with lettering inside of it. I originally thought the letters read “CCBL,” which might suggest Cape Cod Baseball League, but that league’s logo looks nothing like the one on the ball:

If you’ve got any guesses about what league that baseball might represent, please leave a message in the comments below.

I don’t have any commemorative baseballs, but I do have a couple of Frontier League baseballs that have big logos — including this one:

And speaking of Frontier League balls, I’ve also got a couple that have red and blue stitching like this: 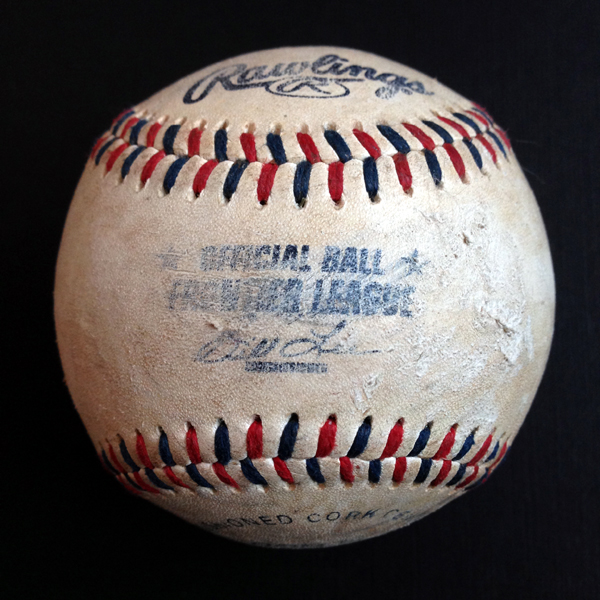 There are a few balls in my collection that have interesting handmade markings. Several minor league teams mark their balls with initials — here are balls from Binghamton and Staten Island: 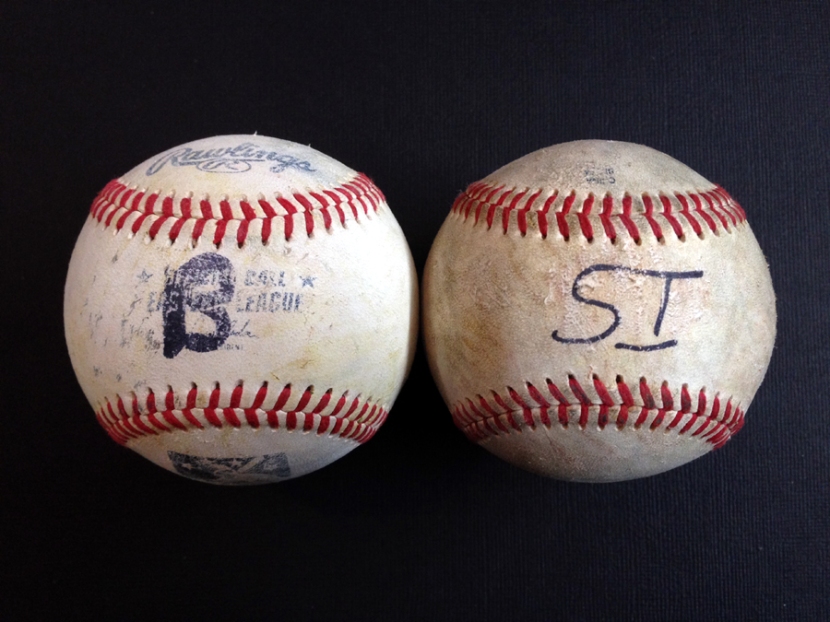 There’s also a considerable variance in the quality of the baseballs. Condition wise, here’s what I’d call the cleanest and dirtiest of my collection:

Here’s a look at the four that remain in my collection.

I’ve also been fortunate to snag 14 foul balls. I have to admit that early on in my travels, I did a sub-par job of documenting who hit some of them. Here are those baseballs, along with what specifics I know. 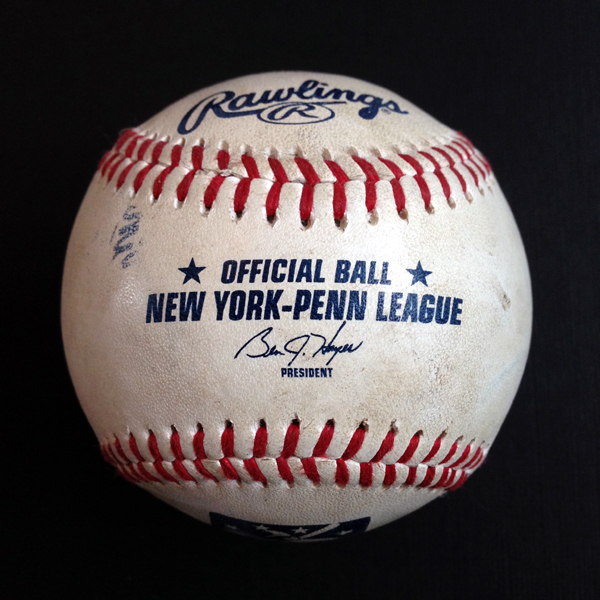 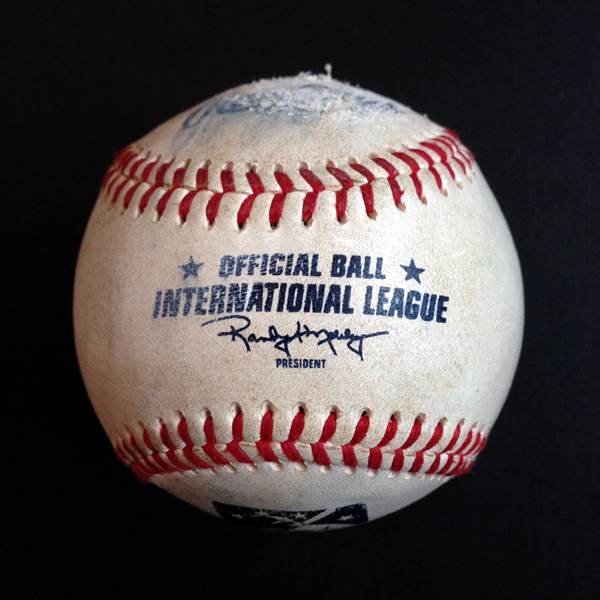 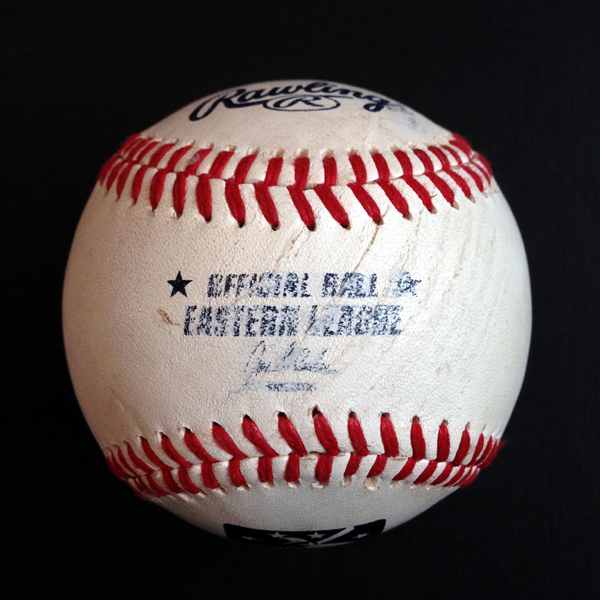 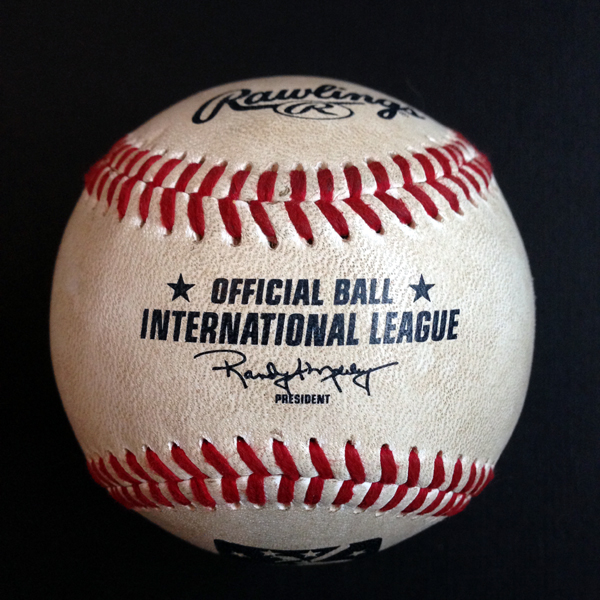 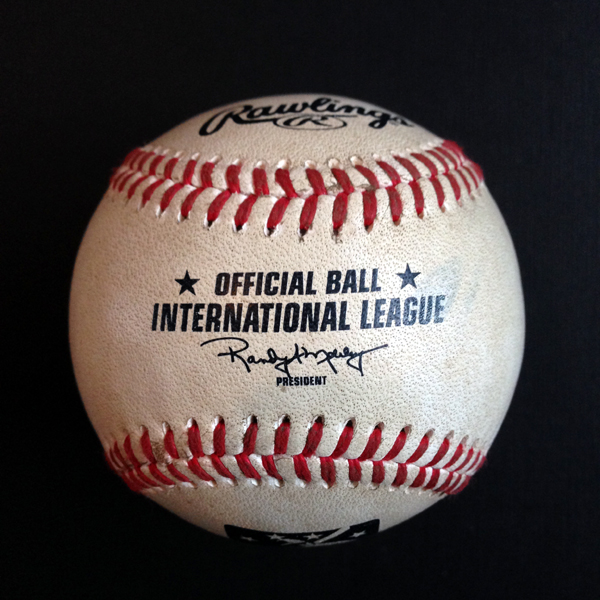 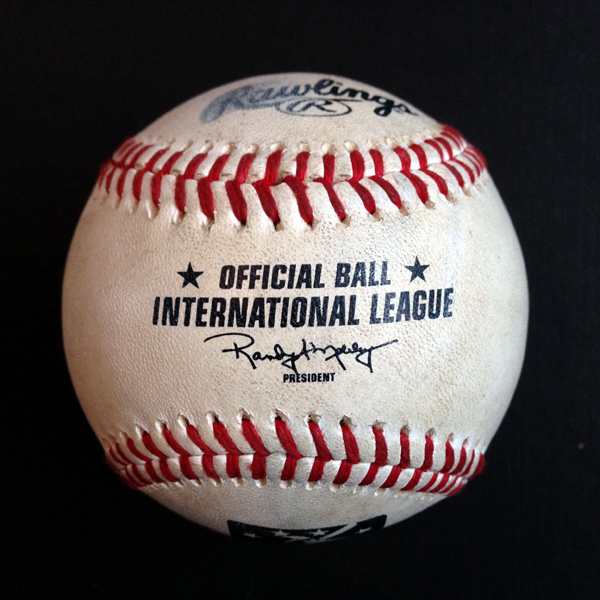 Of course, I wanted to do something more fun than just photograph a bunch of my baseballs individually, so I put together this pyramid that uses most of the balls. Here’s a short time-lapse clip of me building it:

And here are a couple photos of the finished product. The first one’s from the side …

… and this one’s from overhead:

Thanks for checking out my baseball collection. And an extra thanks to those folks online who expressed an interest in me writing this post. It’s something that I’ve wanted to do for a long time — partly because I had no idea how many balls were in my collection — and perhaps I’ll do another version of this post in several years’ time.