Way back in 2010, when I decided to visit as many MLB and MiLB parks as I could and start The Ballpark Guide, my first stop was in Rochester. (If you want to read my first ballpark visit blog entry, you can do so here. Just excuse the wonky formatting.) In the years since, I’ve thought fondly of Frontier Field and always looked forward to returning. I got back to Rochester for another visit last summer, but when I was planning my current 13-day baseball road trip, I couldn’t resist starting out at Frontier Field.

Leading up to this trip, there were many reasons to be excited about returning to Rochester. First, the overall selection and quality of food is the best I’ve encountered. Second, I think Frontier Field is beautiful; it’s one of my favorite places to watch a ballgame. Of course, before I got to kick back in the sun and enjoy something tasty to eat, I had to cross the border. Ugh: 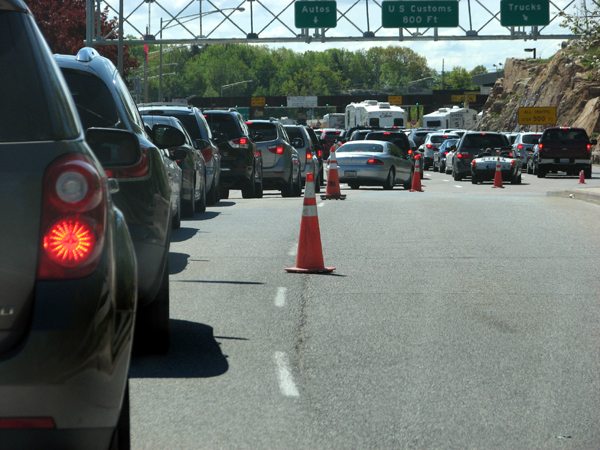 It’s a long weekend back in Canada, so the traffic was ridiculous. I sat within sight of the border crossing for 45 minutes before getting through, and then it was clear sailing all the way through to Rochester. If you’ve read this blog for some time, you’ll likely recall that I like seeing a few sites in each city I visit, time permitting. One spot I wanted to check out this time is Rochester’s High Falls, which looked cool online and isn’t too far from Frontier Field. Although it’s not exactly Niagara Falls, it’s a neat scene and worth visiting when you’re in town: 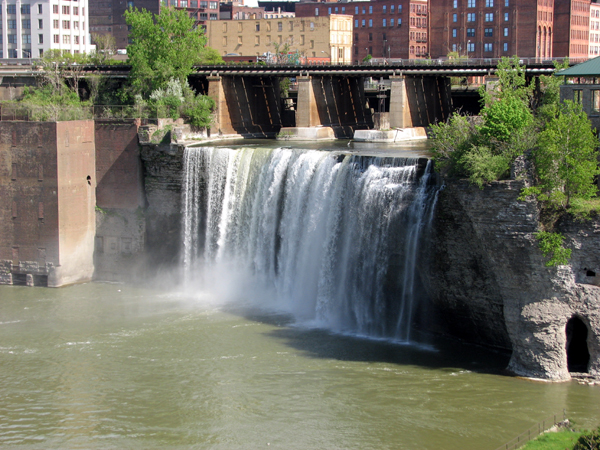 In fact, it’s just a short walk from the ballpark. Here’s the view from the opening of the walkway leading toward the bridge over the falls. As you can see, the ballpark is in the distance: 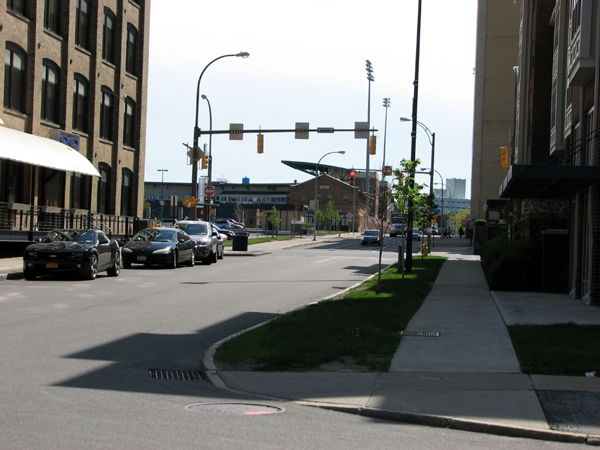 I always wander around whenever I get to a ballpark, and even though this was my third trip to Frontier Field, I stopped to take this panorama by the front gate:

I think you’ll agree that it’s a beauty of a ballpark. One neat feature that I hadn’t noticed in the past — or perhaps that’s new — is some old seats from, I’m guessing, Silver Stadium: 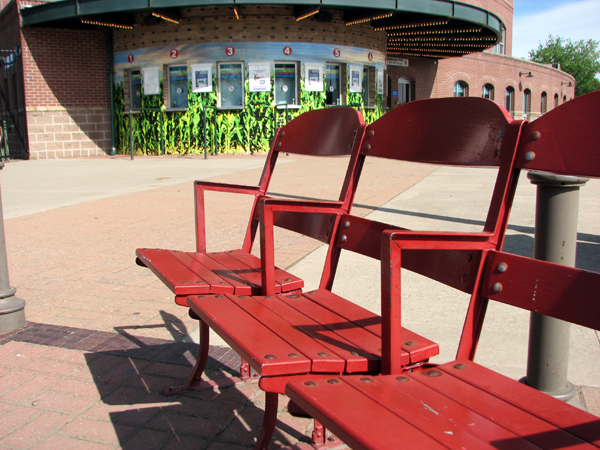 Silver Stadium was the home of the Red Wings from 1929 to 1996. In fact, I plan to check out the site of the old stadium today before tonight’s game.

As usual, I took a walk around the perimeter of the ballpark but this time, I didn’t go nuts with photos. I’ll just share this one: 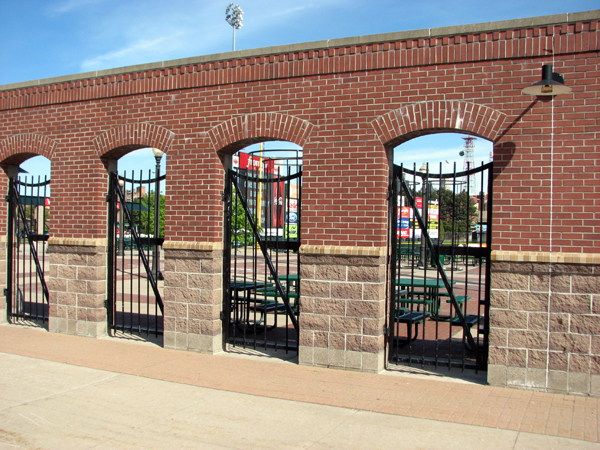 I’m a sucker for modern brick parks, as I think they do an awesome job of paying tribute to the history of the game. The wrought-iron bars and old-style lights really give you an feel of what a park might’ve looked like several generations ago.

During this visit, the Red Wings were providing me with a media pass, so I wanted to get in early and check everything out. A quick thanks to Tim Doohan for the pass; Tim was with the Lehigh Valley IronPigs last season, and provided me with a pass during my visit there, too. Instead of going straight up to the press box, I went down to field level and saw that Rochester had just started hitting: 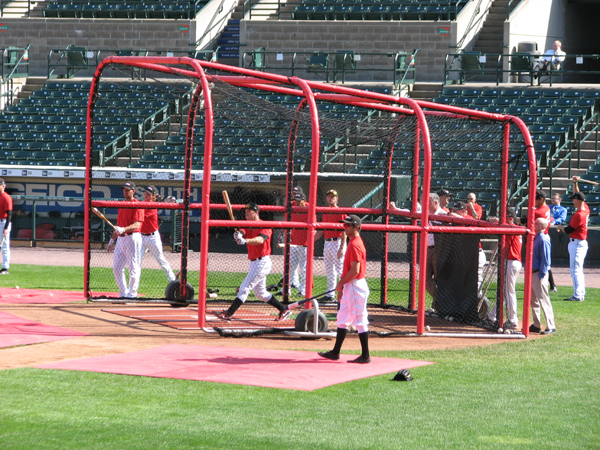 As you’ve seen in the past, I enjoy trying to collect a baseball from each park I visit. Getting in early means that I technically could’ve snagged a dozen BP home runs and foul balls, but I didn’t think that was very fair. So, in a move that might make you ballhawks’ heads explode, I tossed balls back onto the field when I found them. While walking through the seats and across the grass behind the outfield fence, I came across several balls. Some were partially hidden: 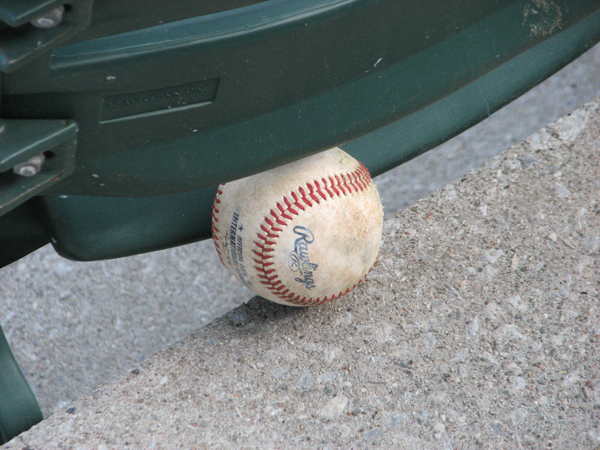 And others were easy to see: 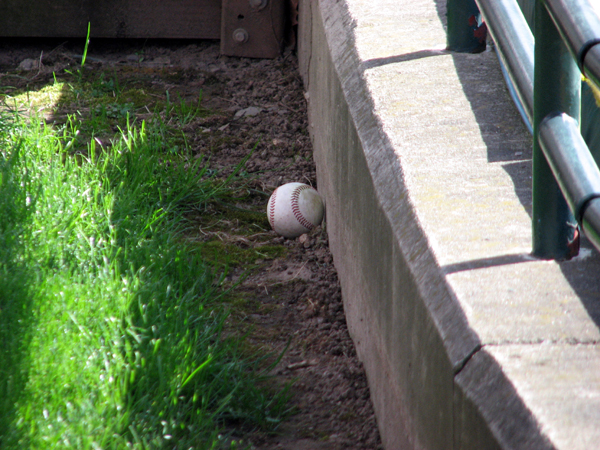 Watching BP is one of my favorite experiences in baseball, and I prefer it at the minor league level. Instead of standing in a crowd of screaming fans at an MLB park, MiLB parks are virtually deserted during BP. I always make a point of sitting near the field and just taking it all in. One of the cool things about being in the park before it opens is seeing sights you wouldn’t otherwise see. For example, here’s a member of the visiting Durham Bulls hanging out with Red Wings pitcher Caleb Thielbar during BP: 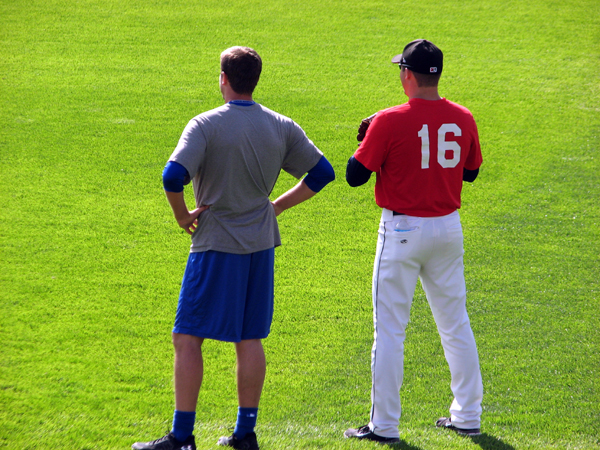 And here’s Rochester manager Gene Glynn talking on his cellphone in the stands: 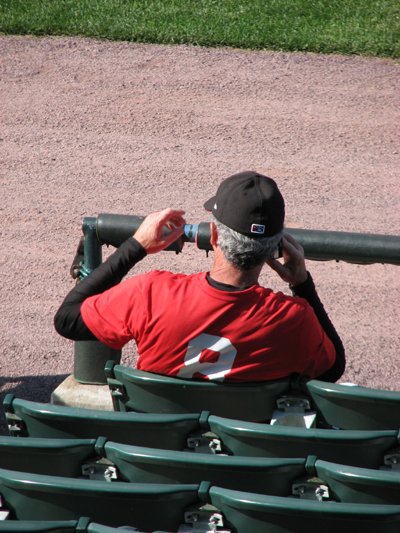 Back to the ballpark itself: As you no doubt know if you’ve been to Rochester, it’s impossible to miss the Kodak building, which looms just across the street: 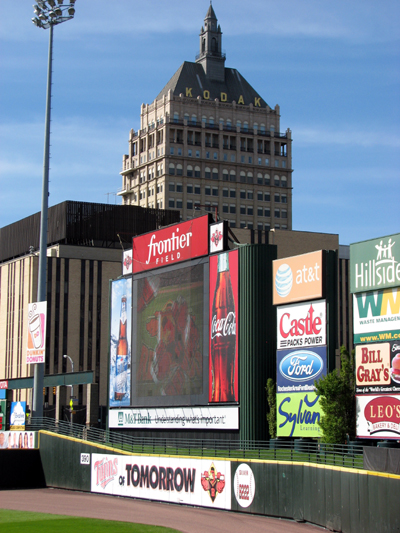 Much of the area beyond the outfield fence is closed off during games, but given that it was still open, I walked through the grass and watched some BP with this view: 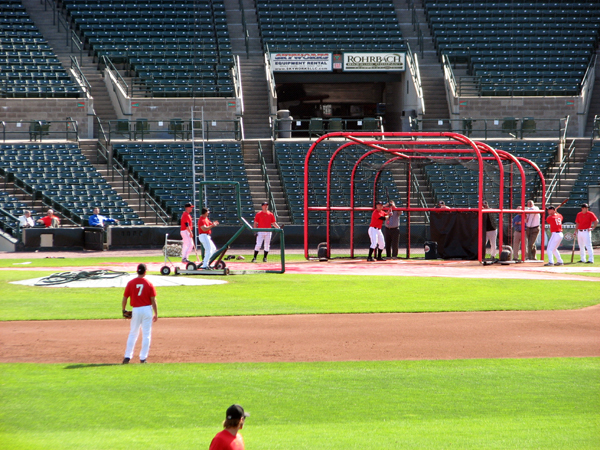 The area around the Rochester bullpen was lined with lilacs, and I thought this made for a neat photo: 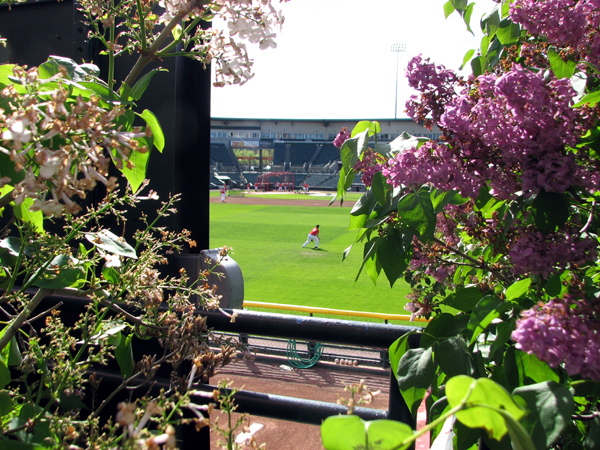 After walking around the entire park and watching a lot of BP, I decided to go up to the press box to check out the view: 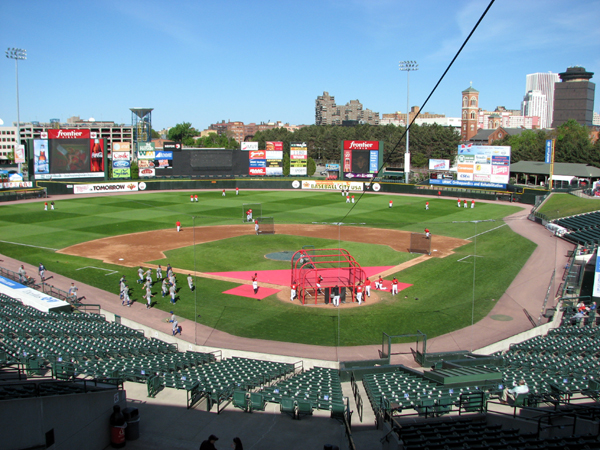 It wasn’t long before I noticed these guys standing below me: 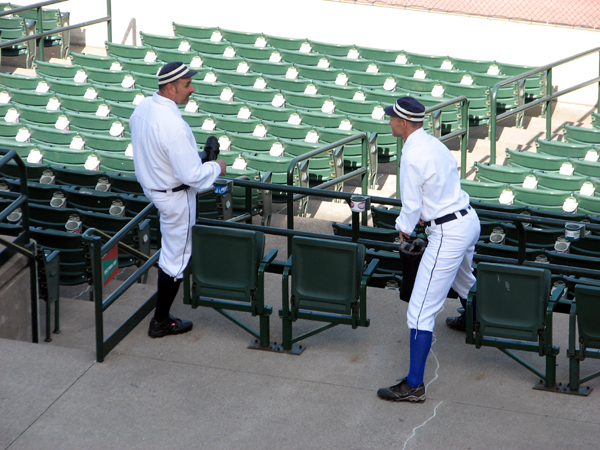 What the heck? I began to see more and more guys dressed like ballplayers from days of yore, so I quickly went back down to field level and it felt like I’d stepped onto the set of Field of Dreams. It was an odd juxtaposition. When I looked the left, this is what I saw: 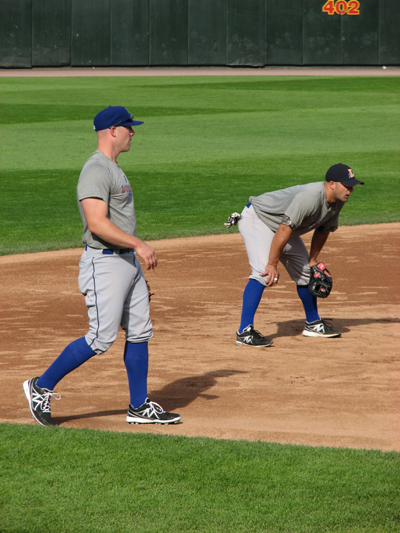 But when I looked to my right, here was the scene: 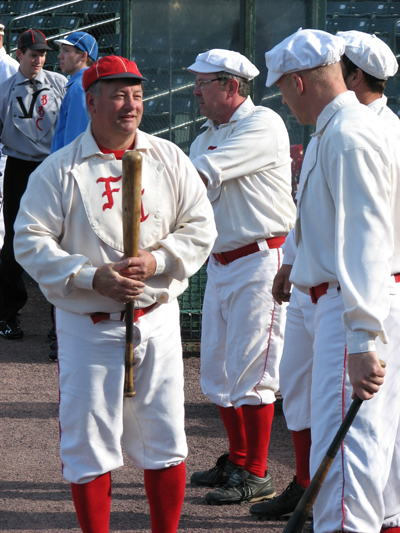 When the Bulls wrapped up BP, it became clear that these old-timers were getting ready to play a game. Their umpire, who doubled as an announcer for the curious fans who entered the ballpark shortly after the historic game began, provided some clarity. The players were playing a short exhibition game with 1866 rules — no gloves, underhand pitching from 45 feet and no balls and strikes. It was fascinating. When the umpire called a batter to the plate, he yelled “striker to the line!” The umpire, dressed in black, is below: 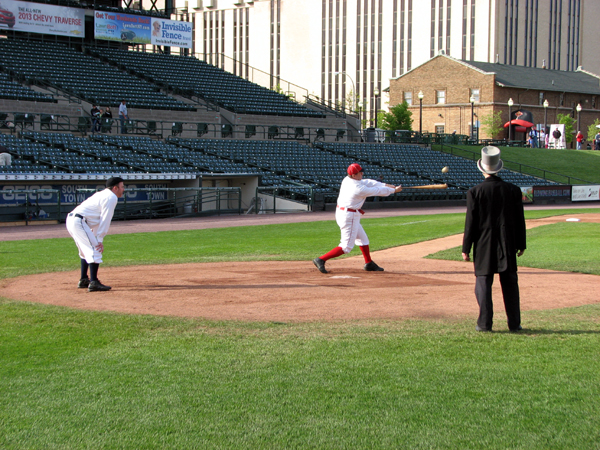 As much as the 1866 version of the game was different, it was neat to see how much today’s game is similar — despite its evolution. I think guys today are thankful for the gloves, though. Imagine fielding a line drive with your bare hands.

Just as the game was wrapping up, I returned to the press box to meet up with Chris Fee. I got to know him a bit on Twitter a couple years ago when he was writing for the Bus Leagues Baseball website, and now he’s doing a bunch of Red Wings/Twins stuff for Twins Daily. It’s always neat to finally meet someone you’ve conversed with online, and Chris is a good guy. We blabbed baseball for maybe 15 minutes before I went back to field level to watch the warmups, which had begun after the clock struck 12 on the 1866 game. Here are a couple Bulls you’ll probably recognize: 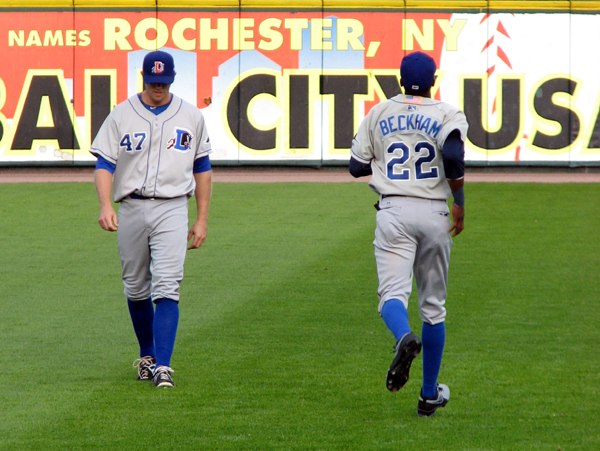 I wanted to take another full lap around the field before the game began in a few minutes, but the outfield was blocked off. As I turned to head back toward the third base line, a baseball caught my eye. It was stuck in the fence directly behind the visitor’s bullpen. Since the gates had been open for nearly an hour, I didn’t feel bad about grabbing the ball.

Once the game began, it didn’t take me long to seek out something to eat. I consider two items from Frontier Field as among the 10 best things I’ve ever eaten on my travels, but I was determined to branch out on this visit. I returned to the Red Osier concession stand but instead of getting the delicious sandwich I enjoyed last year, I got the R.O.B.B. sandwich — double roast beef on a salt and caraway seed bun with au jus sauce and plenty of horseradish: 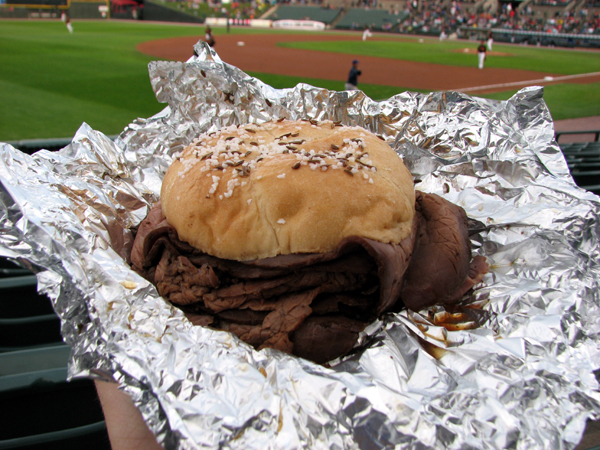 It was absolutely delicious and I can safely say it’ll crack the top 10 when I redo the list in the off-season. Wow!

As for the game, I was especially excited to see prospect Wil Myers. Prior to the season, he was ranked fourth overall by Baseball America and MLB, and it’s always neat to see a top prospect in person. I grabbed a seat behind home plate with this view: 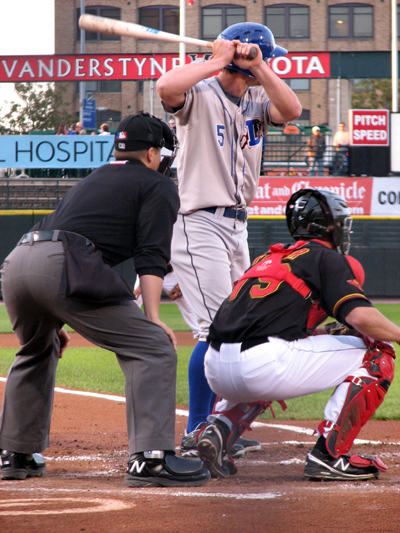 The view, however, was better than Myers’ results throughout the game. He went just 1-for-5 and left three runners on base. 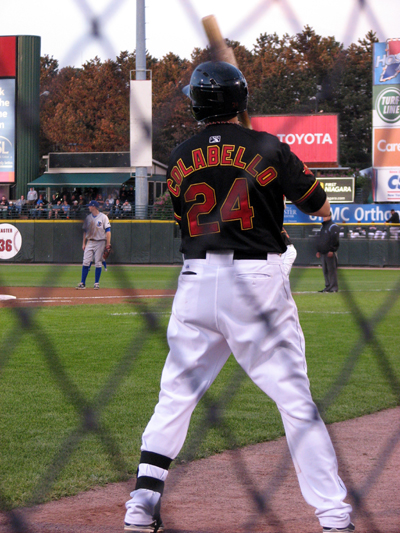 By the fifth inning, I can’t stay I was hungry, but I was hoping to find something else to eat. I don’t normally eat desserts at ballparks, but I’m always intrigued by Frontier Field’s crepe stand, so I decided to get an order of crepes with ice cream, fresh strawberries and blueberries and whipped cream: 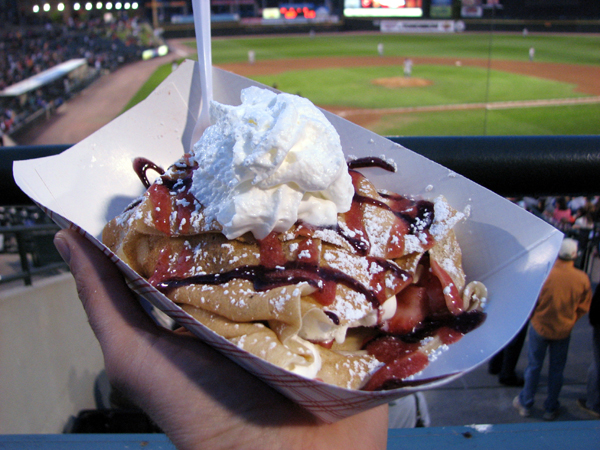 Again, absolutely incredible! It didn’t taste like ballpark food; if I’d received it at a decent restaurant, I would’ve been more than happy.

Once dessert was down, I snapped this shot of the nighttime scene and the Kodak building in the background: 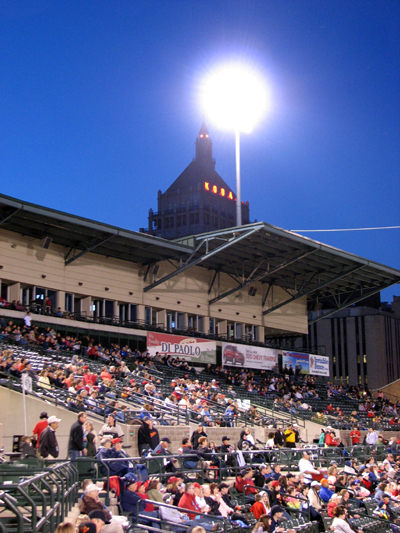 And then moved behind home plate where I enjoyed this view for the rest of the game, which Rochester won 11-6: 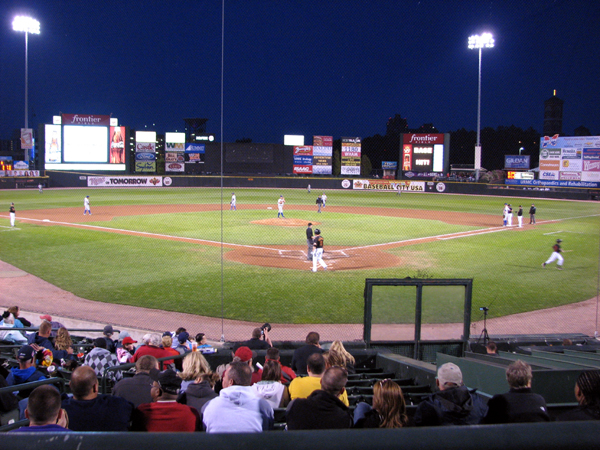 Funny thing about baseball — Rochester cruised through much of the game, leading 11-0 at one point. In the eighth, Durham’s offense went nuts and scored six runs. By the end of the once-lopsided contest, the Bulls had outhit the Wings 12-11.

Yesterday’s visit just reaffirms how great Frontier Field is. I’m already looking forward to getting back there later today for the Pepsi Max Field of Dreams game. It features a bunch of retired MLB legends, and promises to be entertaining.