When I was planning my August road trip for The Ballpark Guide, I spent a lot of time checking out Google Maps, and was intrigued to see how many university campuses were along my route. I planned to take the opportunity to make a few stops along the way and check out some of the schools’ baseball facilities. (Apparently, the nine games in nine days on my trip weren’t enough baseball to satisfy me.)

Originally, I hoped to visit 10 or more non-MLB/MiLB parks, and I included this plan in my August road trip goals. After visiting a handful, I decided to forgo the attempt to get to 10. It was doable geographically, but was adding on a lot of time to my trips — head off the main route, find the school, drive around the campus until I found the baseball field, find a place to park, walk around taking photos, etc.

Why the interest in collegiate baseball, you ask? As you probably know by now, I love not only the Major Leagues, but also the lower levels of the game. In Canada, if a high school even offers baseball, it’s played on a field that is laughable. Many universities don’t have baseball, but those that do typically use fields that wouldn’t be up to par with American high school fields. Long story short: I wanted to marvel at some nice fields.

All that said, my first stop on August 15 was the State University of New York at Canton, in Canton, N.Y.: 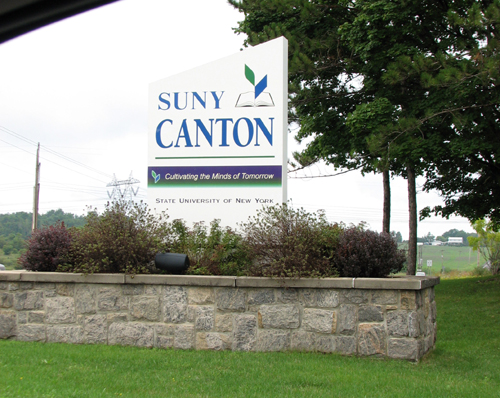 The school’s baseball team, the Kangaroos (more commonly known as the ‘Roos), plays in the United States Collegiate Athletic Association, which is comprised of 82 small institutions.

The SUNY Canton campus was virtually deserted (being August, of course) and after I found the athletic area, I parked my car and began to look around. Of course, a coach happened to walk by just as I was standing alone in the middle of the empty area, and he asked if I needed anything. I explained what I was up to and he said to feel free to enjoy the sights. Before I got to the baseball field, I walked past a beautifully maintained soccer (and lacrosse, I think) field: 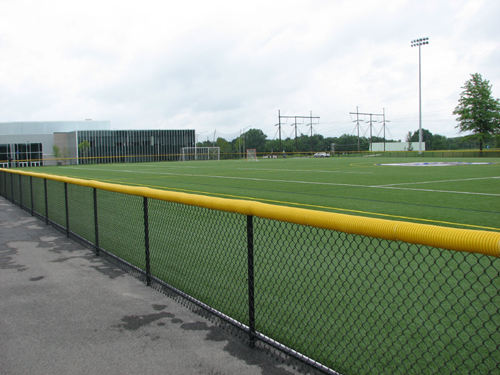 The soccer field was cool to see, but I was on a mission, and soon I came across the baseball field’s scoreboard:

Since no one was around, I stood at home plate for this shot: 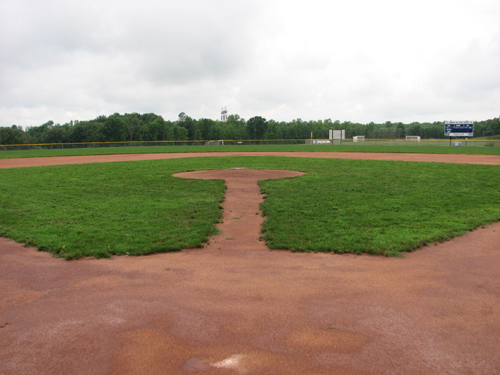 Then, over to the dugout (hardly a “dugout,” but you know what I mean) on the third base side to show the field from this angle:

And finally, a look down the first base line; you can see the bullpen mounds just to the right of the foul pole and the bullpen plates in the foreground:

I get the impression this field is modest by U.S. collegiate standards, but it was exciting to check out.

My next stop was St. Lawrence University, which is also located in Canton, N.Y. St. Lawrence is known for its elite hockey team, but I was more interested in seeing the baseball facility. The St. Lawrence Saints play at Tom Fay Field, and belong to the Div. III Liberty League. Here’s my first look at the field: 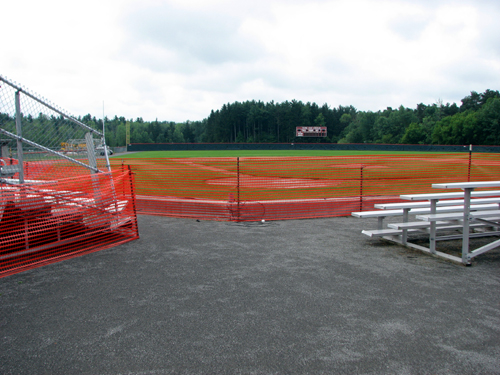 And this is what it looks like from behind home plate:

As you can see, the dugouts are very nice:

Overall, this was a pristine facility, despite being several months removed from the school’s baseball season. When I was packing up to leave, this row boat, presumably from the school’s crew team, caught my eye: 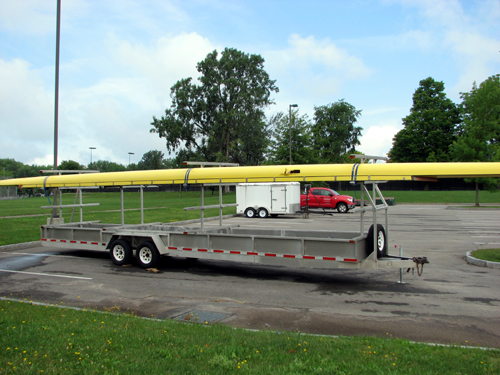 Notice any issues with the hull? How about this closer shot?

Next up was Clarkson University in nearby Potsdam, N.Y.: 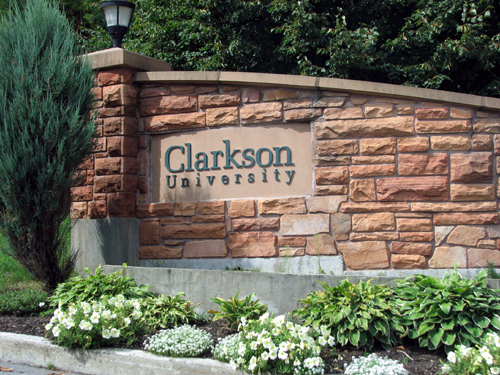 It’s also known for its hockey and has a huge rivalry with St. Lawrence. The Golden Knights baseball team plays at Jack Phillips Stadium on Snell Field, which I found easily: 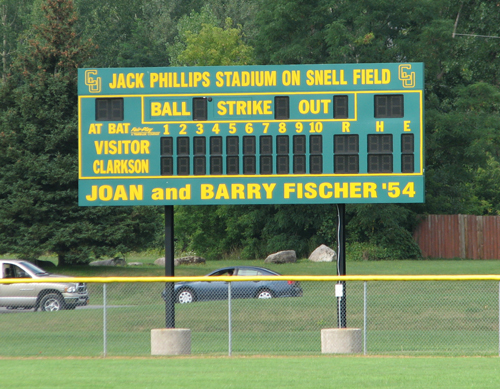 The protective netting behind home plate was still up, so you’ll have to excuse it in the following panorama:

But, as you can probably tell, it’s an immaculate field with impressive dugouts:

I even caught a photo of this little fella on the netting: 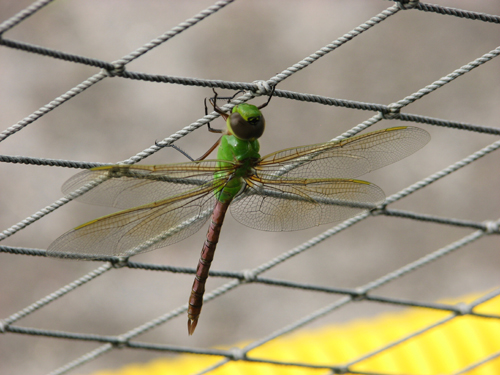 After spending a bit of time at each of these three schools, I had to get back on the road to drive to the Albany area, where I’d watch the Tri-City ValleyCats at Joseph L. Bruno Stadium that evening.

The drive was much longer than it should’ve been, thanks to things like this: 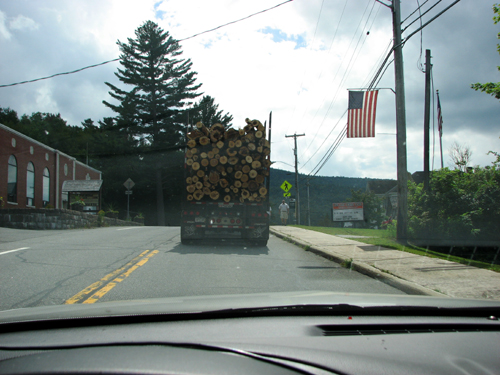 But I did have some beautiful sights along the way: 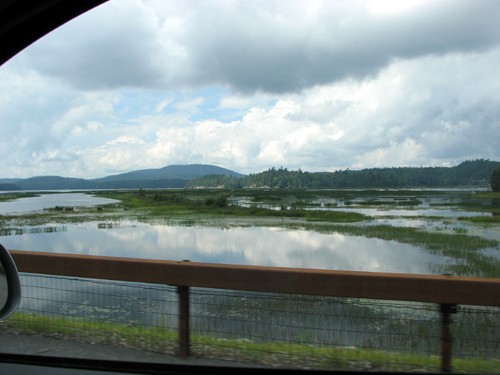 And some snacks to help occupy the time: 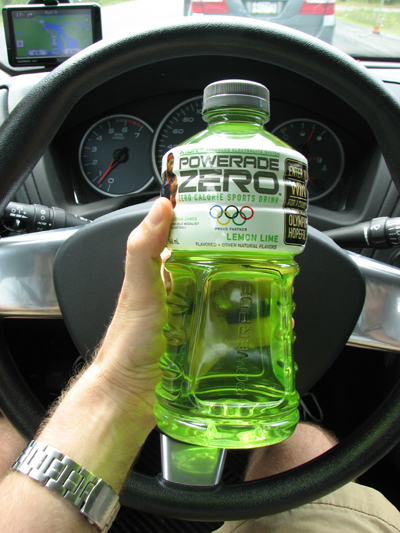 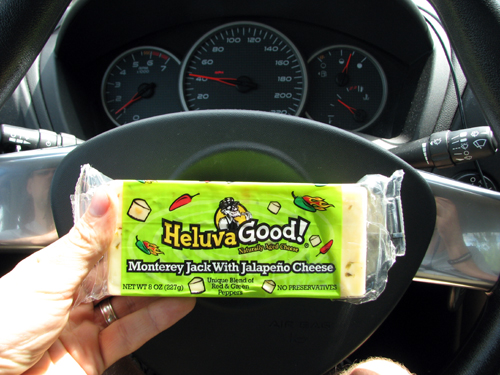 The morning after the ValleyCats game, I had a bit of time before I drove to New Britain, Connecticut, to check out the Double-A Rock Cats in action that night. I stopped at Albany’s Christian Plumeri Sports Complex, which is used by teams from The College of Saint Rose, and numerous other local organizations, I imagine: 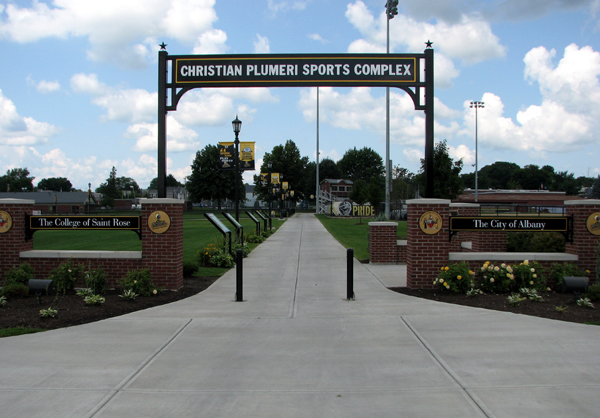 The school’s team, also called the Golden Knights, plays in the Div. II Northeast-10 Conference. Here’s a panorama from behind home plate of the absolutely beautiful ball field:

The grandstand and press box:

One of the bullpens:

And a shot looking out over the complex from atop the baseball grandstand:

The entire facility was just outstanding, and I hung out for quite a while, walking around the taking in the sights. It was virtually deserted, too — just a couple people walking their dogs.

I’ll have more photos from the road in an upcoming post. Next time, I’ll be taking a step back into history in Boston and looking at some very cool sights related to military history.