I had an outstanding visit to Wilmington’s Daniel S. Frawley Stadium to watch the Blue Rocks host the Potomac Nationals last month. That visit included a pre-game, all-access tour, a half-inning in the press box and more. If you haven’t already read about it, here’s how it all went down.

As I said a while back, I added a cool game-used souvenir to my collection while I was in Wilmington, and here it is: 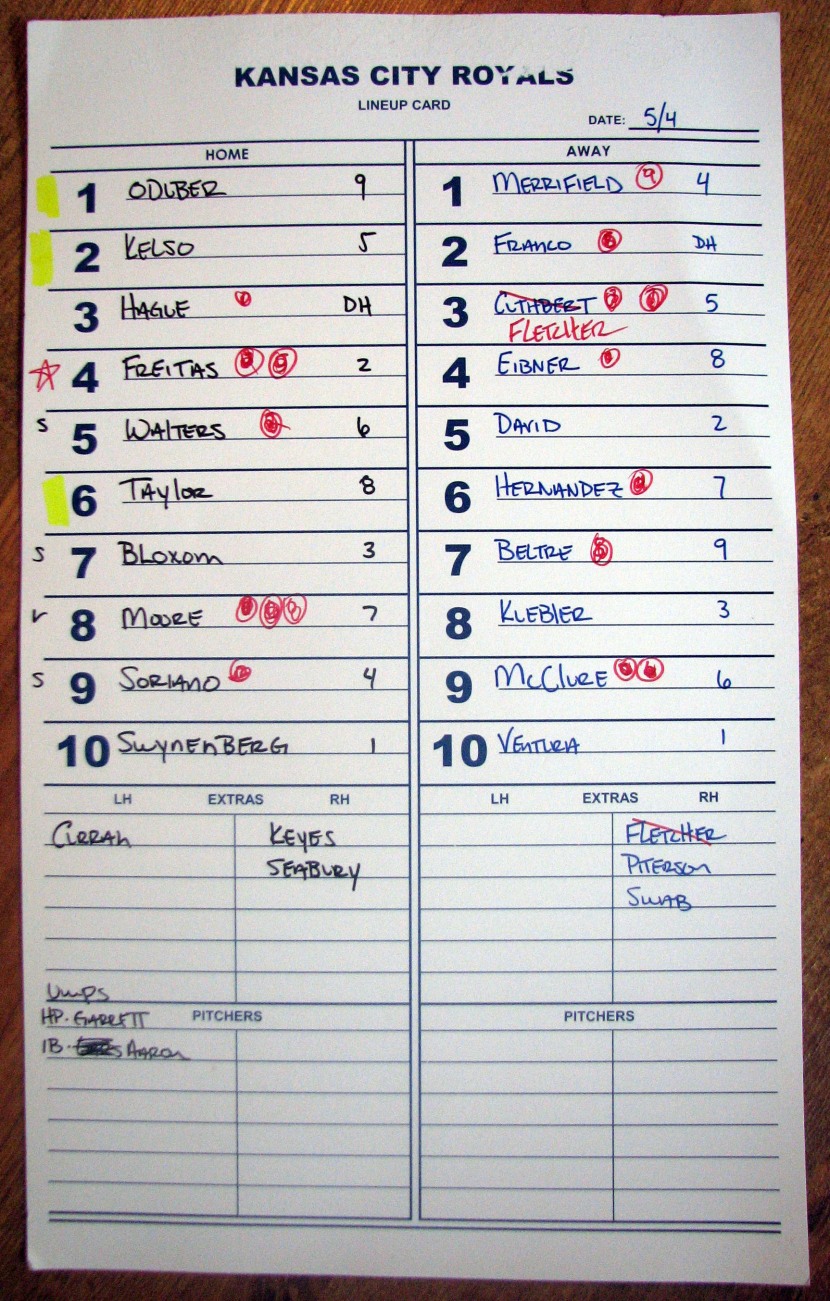 It’s a lineup card that hung in the visitors dugout at Potomac’s G. Richard Pfitzner Stadium during the Blue Rocks’ 5-4 loss to Potomac on May 4. The team was selling these for a whopping $2 in the team shop, so I couldn’t resist getting one.

And because I’m a baseball nerd, here are a handful of cool things about it:

– I think it’s neat that the Kansas City Royals (Wilmington’s parent club) is on the card. It doesn’t actually say Wilmington (or Potomac, for that matter) anywhere.

– As you can see on the Wilmington column, reserve Brian Fletcher was moved off the bench (hence his name being crossed out under the Extras header) to the third spot in the batting order midway through the game.

– Because this was Wilmington manager Vance Wilson’s lineup, there were considerably more notations next to the opponents’ names. I have no idea what the highlighter strokes next to the 1, 2 and 6 hitters mean, but the S and L notations denote switch hitter or left-handed hitter. The other little markings, which you can see around both teams’ lineups are codes used by the manager to note in-game events. And the star next to David Freitas’ name? I have no idea, except it might mean: “Beware. This guy’s good.” Freitas went 0-for-4 in the game but had a .356 average at the time.

– I find it interesting that Wilson didn’t fill out the bullpen pitchers in the designated spot. I’ve seen lots of lineup cards, and I believe this is the first I’ve seen without the pitchers. As you can see, he did add the names of the two umpires.

– Here’s something else intriguing. The 10 spot, which is used for each starting pitcher, isn’t correct on the Wilmington side. Wilson had Yordano Ventura penned in for the start, but it was actually Ryan Dennick who took the ball. (Ventura pitched two days later against Potomac.) It’s funny that Wilson didn’t mark this change.

There are a ton of other cool things, and before long, I’ll have written 1,500 words about a lineup card. Two players I want to quickly point out, though: Randolph Oduber, who led off for the P-Nats, played last season in Hagerstown, where I got a couple photos of him walking with Bryce Harper. And the Beltre you see on the Wilmington side isn’t Adrian, obviously. It’s the lesser-known Geulin. (This is only worth mentioning because I heard fans excitedly saying Adrian Beltre was playing after they saw the starting lineups posted in the stadium concourse.)

This is the second lineup card in my collection. Last year, I bought an MLB one in Detroit, which you can read about here.

Finally, since we’re on the topic of Wilmington, I thought I’d post a picture of the souvenir cup I got during my visit. (With a Carolina League ball beside it for perspective.) I’ve collected a handful of souvenir cups on my travels over the years, so one day, I’ll blog about them. In the meantime, here’s the Blue Rocks one, which features a 2012 schedule:

If all goes according to plan, I should have some early details on my next road trip next week. Either way, I plan to have a couple more blog posts.