Less than three months after attending my first Ottawa Champions game of the season, I was back in Canada’s capital city to see the Can-Am League team again — this time, as it competed for the league crown.

I don’t normally make it a priority to attend playoff games, because larger crowds impede my ability to explore different ballparks with ease — in fact, the last time I saw any playoff action in person was 2010, when I watched the New Hampshire Fisher Cats and Tri-City ValleyCats on back-to-back days. But, I was happy to add a Champions game to my schedule just a few days before I’d head off to Denver.

As always, I arrived good and early and I appeared to be the first fan in the parking lot at Raymond Chabot Grant Thornton Park: 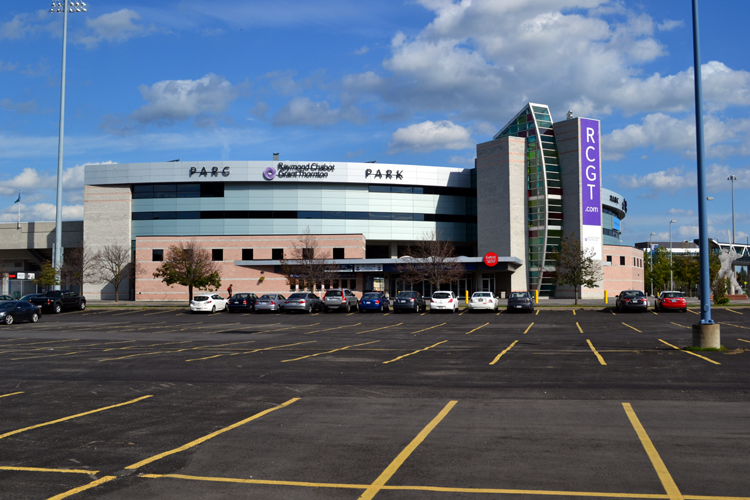 Before entering, I decided to check out the ballpark from a vantage point I hadn’t explored on my last visit. If you read that post, you might recall me writing about how Coventry Road passes directly behind the outfield fence and, in particular, is very close to the fence in left field. Pedestrians will often watch some of the game from the sidewalk, so I wanted to see how the view looked from this spot. I was impressed — you’d have to contort your body a bit to see the whole outfield, but you’d definitely be able to follow the game from here:

Of course, you’d enjoy the game much better from inside the stadium, and that’s where I headed next.

One of my favorite ballpark experiences is walking into a park before the gates open and just standing quietly on the cross-aisle. There’s something special about being in this environment; it’s calm and peaceful, but you can hear the music playing and BP taking place. It’s almost like a mini meditation for me. Anyway, BP hadn’t yet started when I entered RCGT Park, but the cage was set up and the players were just minutes away from hitting:

Next, I went down to the field and took this shot for Instagram:

I'm back in Ottawa for some Can-Am League finals action with the @ottawachampions and the @rocklandboulders.

The Champions were hosting the Rockland Boulders, who hadn’t yet appeared as I made my way down to the field to talk with Dante De Caria and Mike Nellis, two of the team’s broadcasters whom I’d met during my last visit and are great guys to talk baseball with.

After catching up with them for a bit, they got back to their pregame routine, and I stayed on the field to watch BP. At one point, I noticed Hal Lanier, Ottawa’s 74-year-old manager: 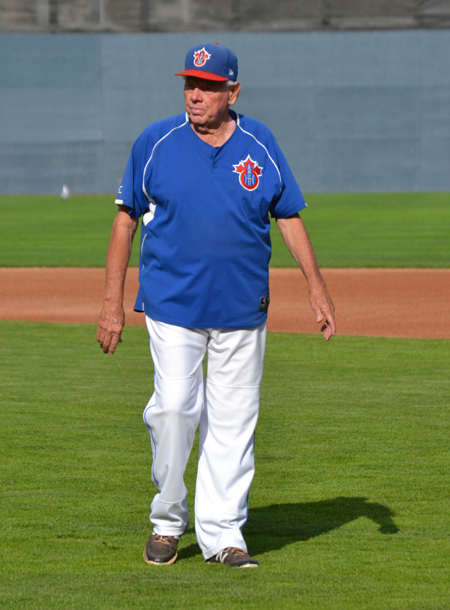 Once I’d watched Ottawa finish its BP session, I decided to do some more exploring of the ballpark. My first stop was the home bullpen down the third base line. I stood there to watch a bit of the Rockland hitting session …

… and then took a walk through the still-deserted concourse:

Next, I made a brief stop up in the press box just to grab the rosters and lineups and check out the view …

… and then went back down to the field just after BP had finished:

Since I’d enjoyed checking out the view from behind the left field fence earlier on, I decided to go up beyond the right field foul pole, just to see RCGT Park from a new vantage point:

I was standing on a driveway that is closed off to the public, but this is near the area where the visiting team’s bus parks during the game, as you can see on the left of the above photo.

Since I was beyond the fence, I couldn’t resist taking a look for a home run baseball from BP. It didn’t take long for my search to pay off, but this ball had definitely been there a long time, and didn’t have any discernible markings on it: 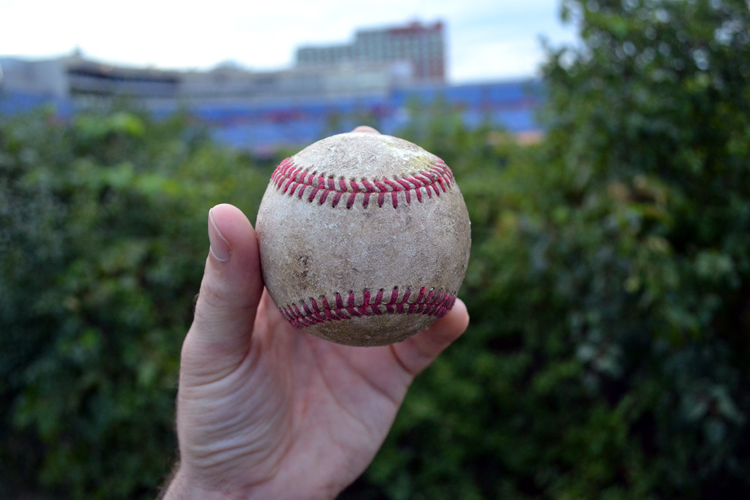 By now, first pitch was getting closer, so I went back up to the suite level and headed to the press box. First, though, I stopped in a bar/eatery that was closed, but that I think is used for private events throughout the season. This was the first time I’d ever checked this spot out in all my visits to the Ottawa stadium: 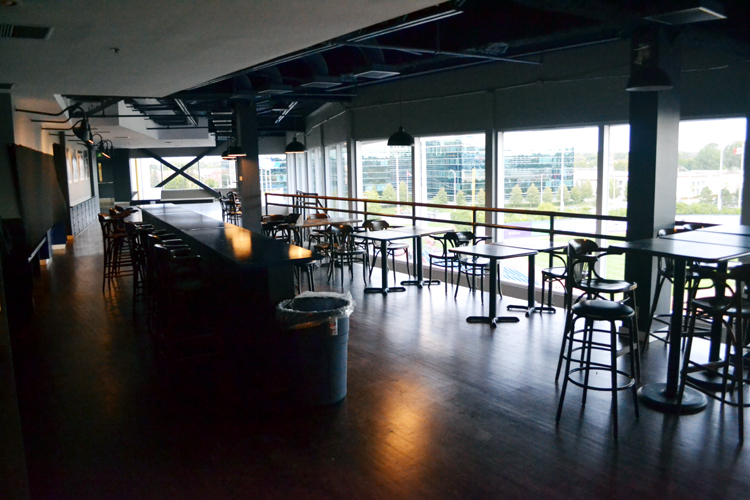 I can see this being a cool place to watch a game — here’s how the view looked from the seats along the window:

Before heading back down to the concourse, I poked my head into the press box one last time … and was surprised to see a former colleague I hadn’t seen in eight or nine years. He was shooting the game for his newspaper, so we decided to shoot the game together and get caught up in the process. We headed down to the camera pit at the end of the Ottawa dugout, where I’d have a perfect view for a bunch of action shots.

How close was I? 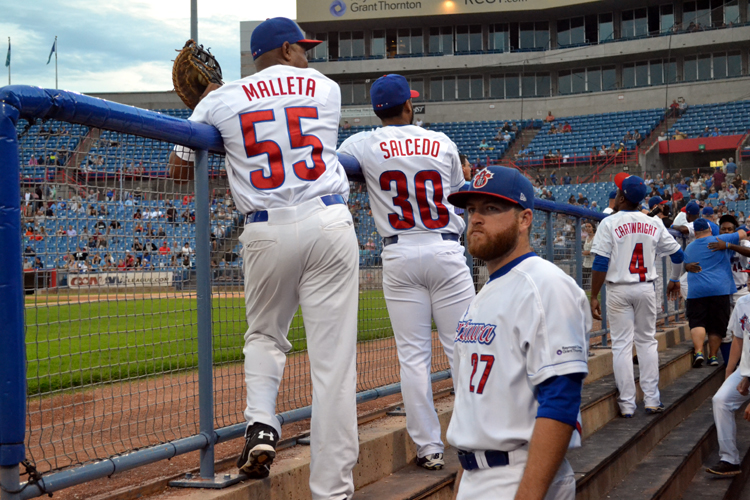 You’re looking at Cuban import and infielder Alexander Malleta, catcher Jonathan Salcedo and pitcher Andrew Cooper, who was a 12th-round pick of the Washington Nationals in 2013.

The camera pit was a neat spot. Not only did it provide a good view of the action on the field and a front-row spot to the goings-on in the dugout, but if I turned to my left, the Ottawa bullpen was just a few yards away. As such, I had a unique spot to watch starting pitcher (and 2016 Can-Am League Pitcher of the Year) Austin Chrismon warming up: 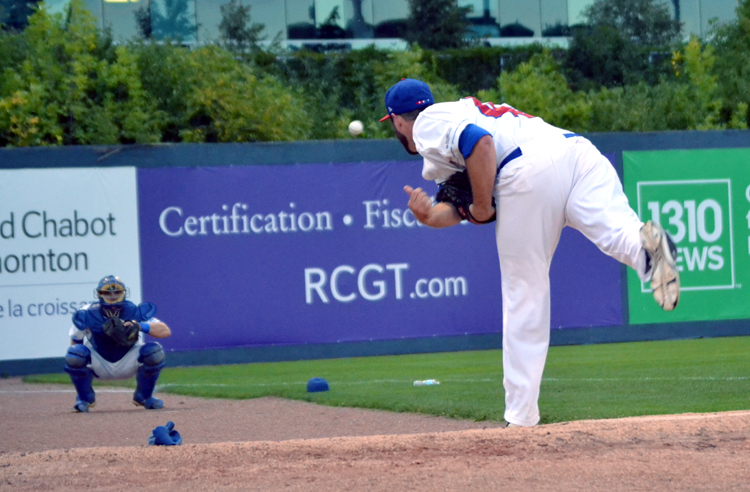 As much as I typically enjoy spending each game I attend on the move, it was fun to just hang out with my friend and watch the action from this spot. And there was plenty of action to see, too. Here’s Rockland’s Marcus Nidiffer blasting a home run: 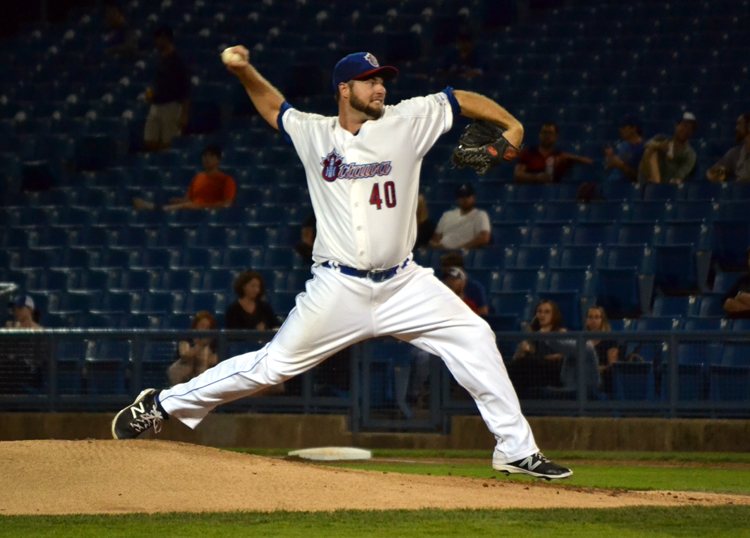 Champions third baseman (another Cuban import) Donal Duarte playing a ball right that carried him into foul territory right in front of me:

And outfielder Adron Chambers taking a lead off second:

You might recognize Chambers’ name — he earned a World Series ring with the St. Louis Cardinals in 2011. I was glad to be able to snap a shot of Chambers, not just because of his MLB connection, but also because he played in the Midwest League. I’d noticed before the game that many of the players on both sides had MWL experience, so I wanted to take some action shots to share with my buddy Craig Wieczorkiewicz, a.k.a. The Midwest League Traveler. He used some of the pictures and wrote about the series on his blog. Hands down, Craig provides the most thorough MWL coverage around, so give his blog a look and be sure to check him out on Twitter, too.

My ex-colleague left about two-thirds of the way through the game, so I decided to head out, too — not out of the park, just out of the camera pit to continue looking around. I watched a bit of the action from here …

Next, I finally got around to eating a late dinner. Once again, I visited the poutine stand where I’d enjoyed the Tao Poutine during my last two visits to RCGT Park. To change things up, I ordered the smoked meat poutine, which contained a heap of smoked meat on the usual poutine ingredients. It was good, but not nearly as good as the Tao variety, which’ll likely be my choice during my next visit. Unfortunately, my photo doesn’t show much other than smoked meat, but you get the idea: 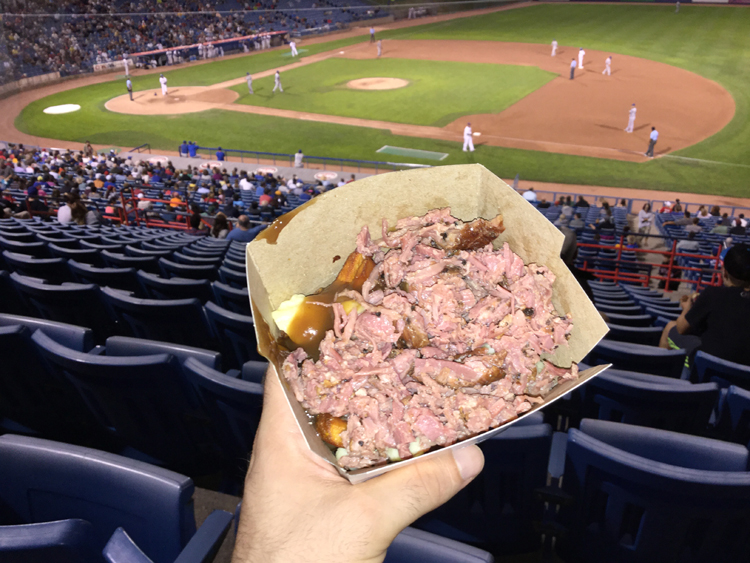 In my blissful meat coma, I watched the remainder of the game from high on the first base side. Rockland put up an eighth-inning rally, thanks in part to Nidiffer’s second home run of the game, to top Ottawa 6-5. Ottawa would get the last laugh, though, clinching the Can-Am League title in five games to earn top honors in just their second year in the league — and earn the name on the front of their jerseys.